By now Karim Benzema could easily be a World Cup winner with France, having scored the most goals and won the most caps in the country’s history.

Instead, barring an unbelievable U-turn and climbdown from national team manager Didier Deschamps and French Football Federation president Noel Le Graet, the 33-year-old is destined to once again controversially be watching a major tournament finals from the sidelines.

He's stuck on 81 caps, which leaves him short of his century and way behind Lilian Thuram's record of 142, yet there has never been any argument about whether Real Madrid forward should be in the team on merit. By 2015, the year in which he last played for his country, he had already scored 27 times for France in those 81 appearances.

And the numbers for one of the world’s great clubs, even before you get into Benzema’s actual qualities on the pitch, simply do not lie. 555 games and 277 goals for Los Blancos, four Champions League titles, three La Liga crowns and still the possibility of a fourth this year.

You can also throw in four league titles and 66 goals for former club Lyon – and even in the recent Champions League semi-final defeat to Chelsea, Benzema scored in the first leg and gave the finalists problems all night in both matches with his game intelligence and physical strength.

But rather than strutting his stuff on the Euro 2020 stage, Benzema will instead be preparing for a court appearance in October over sensational ‘sex-tape blackmail’ allegations from six years ago.

This correspondent remembers ‘L’Affaire Benzema’ well, because as I arrived at the friendly international between France and Germany on November 13, 2015 at the Stade de France in Paris, that was all anyone was talking about.

By the end of the evening it became a complete irrelevance given the tragic events of that night, as terrorist gunmen and bombers carried out a horrific series of murderous attacks in the French capital including in the environs of the stadium.

And so for a while, distasteful as the allegations were against Benzema - who describes the ongoing case against him as “a farce” - that he had been complicit in an attempt to blackmail former France team-mate Mathieu Valbuena for featuring in a sex-tape, the story took a back seat. 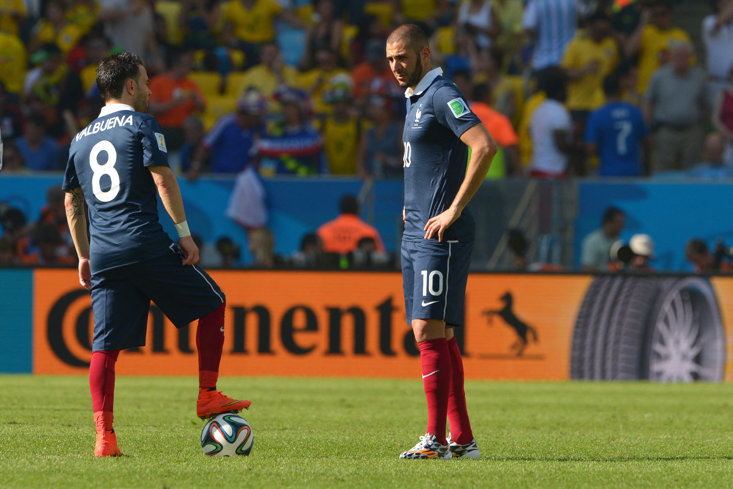 However it flared up again with a vengeance in 2016. To see one of his best players become embroiled in such an unsavoury story was bad enough for Deschamps, raising issues of trust.

But having left him out, when in 2016 Benzema, of Algerian descent, accused Deschamps of pandering to “a racist part of France”, that was the final straw for the coach. The comments led to graffiti accusing the coach of being a racist daubed on Deschamps’ home.

Deschamps said: “It is a stain. Even if with time it calms down a bit, I can't forget. It's not just about Karim Benzema. There are statements by other people too that have led to this violent act, which affects my family.

“It’s crossing the white line here. It affects my name, my family. For me, it's unacceptable. Making certain statements inevitably leads to verbal or physical aggression. I suffer the consequences. You can't forget. I can't forget. I will never forget.”

And it became clear that without something quite extraordinary and highly unlikely happening, with neither man showing any intention of moving to a more conciliatory position, that Benzema would never again play for Les Bleus while Deschamps remained at the helm, with the full backing of the FFF president Le Graet.

There is little doubt that reaching the final of Euro 2016 and even more so winning the World Cup in 2018 took some of the selection pressure off Deschamps over the absence of Benzema.

Without that triumph and the emergence of Kylian Mbappe as arguably the greatest striker on the planet, his stance might have been more tested.

And there is also no mistaking who has been the very obvious beneficiary of the Benzema ex-communication – Chelsea’s Olivier Giroud.

Had Benzema been in the squad, it is highly probable that Giroud’s appearances and starts would have been severely limited with France. Instead he has taken the opportunity fate handed him, and gradually moved on to 44 international goals, second in the all-time list only to Thierry Henry on 51.

This good fortune was not lost on an increasingly bitter Benzema. Asked to compare himself to Giroud, he said: “This won’t take long. You don’t confuse F1 with go-karting. And I’m being kind. Next… and I know I’m F1.”

Giroud has won over the France fans with his goals and service, but in earlier years he was targeted by pro-Benzema supporters. The former Arsenal forward said at the time: “Yes, it annoyed me. I was not even remotely responsible for this story and I did not understand the kind of hatred that developed against me.”

There seems no way back for Benzema for this tournament and probably now ever, and France will look to Mbappe, Antoine Griezmann and in all likelihood the ageing war horse Giroud for the bulk of their goals this summer.