David De Gea redeemed himself against Villarreal last night, putting in a wonderful performance that arguably won Manchester United the game. While Cristiano Ronaldo made headlines for his injury-time winner in the Group F tie, the Spain goalkeeper had bailed his team out on multiple occasions. After suffering perhaps his lowest point against the same side in last season’s Europa League final, failing to save eleven penalties in the shootout before missing his own, De Gea has enjoyed a career resurgence.

There were doubts about whether David De Gea would even remain at the club this summer. Dean Henderson had appeared to usurp him for a Premier League starting slot, and a couple of seasons of unsteady form had eroded the former Atletico Madrid man’s fearsome reputation. However, circumstances dictated that De Gea would not only be retained, but reinstalled as first choice. Henderson missed England’s Euro 2020 campaign through injury, before contracting COVID-19. These devastating setbacks led to De Gea starting the season as United’s undisputed number one, and he has built on this foundation ever since.

De Gea’s promising early-season performances impressed United fans, but were crystallised in the wider football consciousness when United beat West Ham. David Moyes’ side were awarded a last minute penalty, and the chance to draw level at 2-2. De Gea had not saved a penalty since 2016, but stopped Mark Noble’s spot kick to cap another solid display. 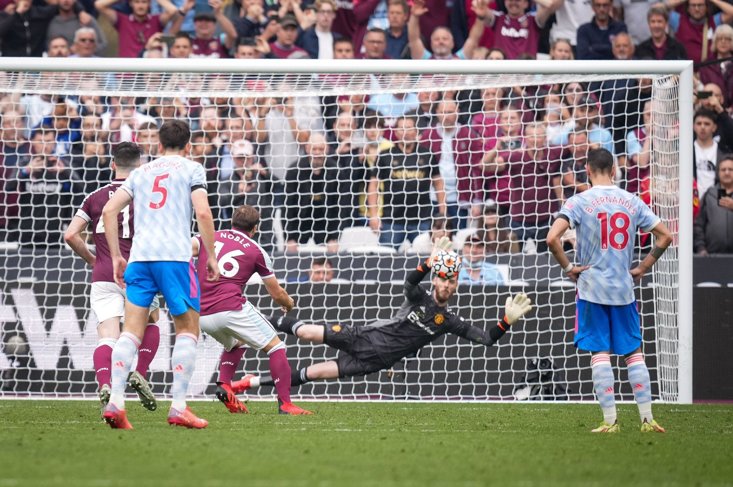 The goalkeeper’s performance against Villarreal was his finest of the season so far. Former Bournemouth man Arnaut Danjuma went close on a couple of occasions, while Paco Alcacer was denied spectacularly before finally getting his goal in the second half. With United fielding a makeshift back four due to a spate of injuries, De Gea was crucial in underpinning the defence and keeping his side within touching distance of an eventual victory.

Form can be fleeting for a goalkeeper, as they are only ever one costly mistake away from the turning tide of public opinion. But Solskjaer and United can be heartened by De Gea’s resurgence. With Henderson unavailable, and a team that has flattered to deceive at times, the Spain stopper has been one of the bright spots of the season. This, of course, presents quite a conundrum.

When the complications from coronavirus clear, Dean Henderson will be available for selection once again. The identity of United’s first-choice keeper was a hotly-debated topic last season, and for the most part the shared workload did work. De Gea played 36 games across all competitions while Henderson made 26 appearances. However, at 24 years old, Henderson has made it clear he wants to be playing more football. He was well on the way to realising this ambition at the end of last season, but his goalkeeping rival is making himself undroppable. When both his first choice goalkeepers are fit, Ole Gunnar Solskjaer is going to have another selection headache to go with his wealth of options in attack.

Does he back the experienced De Gea, who has looked at times like his best days are behind him? Or does he gamble on the younger Henderson, who has shown great promise, but has played most of his senior football in the reduced spotlight of Sheffield United? Publicly most managers would claim to be glad of such a problem, two players of obvious quality vying for one role. But the goalkeeping position is a different beast. You cannot top up the game time of an unsettled player with substitute appearances, nor does rotation really benefit this most unique of positions. Successful sides are built from the back, with a consistent performer needed between the sticks. It remains to be seen which of his twin number ones Solskjaer will pick, but you cannot deny David De Gea has done a great job of stating his case.