St James’ Park reeks of complete and utter apathy right now. Newcastle United is just about existing, but that’s about all that can be said of the club. The heart and soul of a once-proud institution has almost completely disappeared and the joyous memories of Kevin Keegan, Alan Shearer, Les Ferdinand, Rob Lee and Gary Speed are sadly fading.

With two key players, Miguel Almiron and Allan Saint-Maximin now ruled out until April, Newcastle are a club in crisis. With just two wins in their last 17 matches in all competitions, they lie only three points above the relegation zone, and given Fulham are unbeaten in their last five, it likely won’t be long before the Magpies slip into the bottom three. They're now 6/4 with Betfred to be in the Championship next season.

But honestly, at this point, who cares? Mike Ashley’s attempted sale of the club is now on pause until their fate is decided one way or another, but he has shown complete and utter contempt for the club and the people of Newcastle over the past 14 years. Yes, it really has been that long, and the regression of the club under his ownership has not been sharp, but steady and soul-sapping.

The fans care, but they’ve been visibly drained by this regime. Steve Bruce absolutely cares, but it seems he lacks the ability, and his squad is missing the quality needed to challenge in this league. Better managers than Bruce have failed under Ashley, and as a Geordie you can see that this failure truly hurts him. Aside from that, how many of the players are proud to wear the shirt? How many of them can lead like Shearer did? How many are just picking up a pay-packet until they get another move? 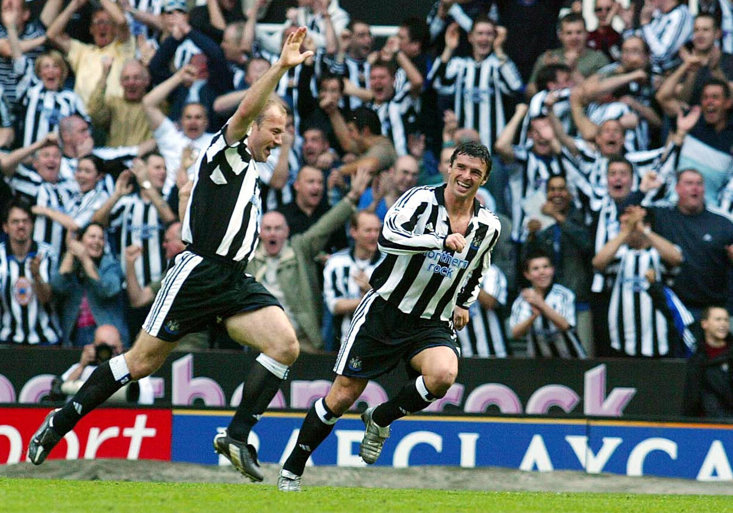 NEWCASTLE ONCE THRIVED THANKS TO THE LIKES OF SHEARER AND SPEED

The failed Saudi takeover looked to be a way out of this monotony. In fact, they were at one point second favourites to sign Kylian Mbappe as excitement swept across the Tyne that they could soon be supporting Britain’s richest club. It never materialised, and now every Newcastle fan is simply desperate for the Ashley regime to come to an end, no matter if they end up in the second tier again.

This is a club that used to challenge for Premier League titles and compete in Europe. Hell, they even beat Barcelona, yet now they can barely keep their heads above water in the top flight. They face West Brom, Aston Villa and Brighton in their next three games, which could define their entire season as Bruce comes under more pressure. If they do go down they will likely come straight back up from the Championship, as they did in 2010 and 2017, but something needs to change or this cycle will just continue.

This season is ultimately a microcosm of their recent history since the Premier League’s induction in 1992. They started well, made some progress with a solid foundation and then just slid away into nothingness. If they aren't careful, the season that started with so much hope could end in relegation. Again. Short of the willingness to turn the ship around, they have faded into complete nothingness. 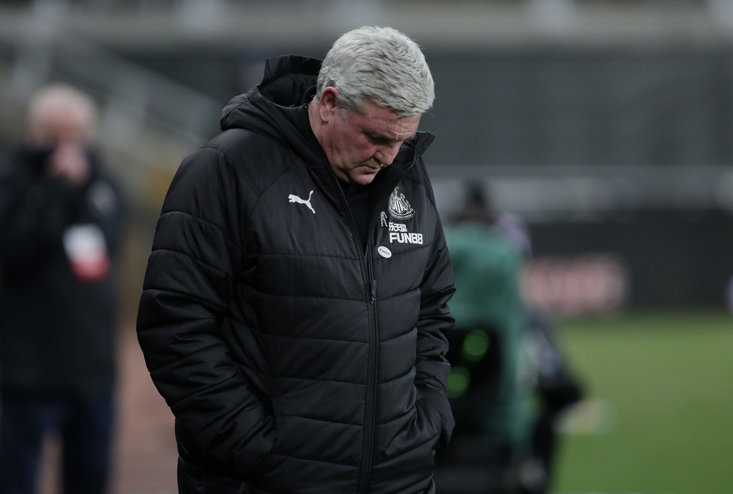 BRUCE HAS STRUGGLED TO HAVE A DISCERNIBLE EFFECT ON THE SIDE

The Premier League, through no fault of its own, has been a soulless place for Newcastle fans over the past few years. In fact, the season that the Magpies at their best and brought the club back to life was the first of their Championship title-winning seasons in 2010, with the likes of Andy Carroll, Joey Barton, Kevin Nolan and Fabricio Coloccini thriving at the club. Now that was a team the fans could get behind.

Relegation is looming again for Newcastle but, actually, it may not be the worse thing, because right now it is just drifting. This club needs new life breathed into it once again. The Gallowgate End needs to roar, the city needs to believe. Only when Ashley finally departs will this dream become a reality.

x
Suggested Searches:
The Sportsman
Manchester United
Liverpool
Manchester City
Premier League
More
football
Southgate Should Let Attackers Play With Freedom Against Germany
The mood surrounding the England national team isn’t great. We are less than two months away from [ ... ]
football
Missed Chances And Lewandowski Magic Relegates Wales
Wales have been relegated to League B of the UEFA Nations League after suffering a 1-0 defeat against [ ... ]
football
Chelsea Overcome Poor First Half Against Manchester City For...
Reigning Women’s Super League champions Chelsea are up and running this season as they defeated [ ... ]
football
Live Football Blog: Women's Super League + Wales Take On Poland
Good afternoon football fans! We've got Women's Super League action on the menu today as West [ ... ]
football
Grading Every Premier League Club So Far: A's For Arsenal, Fulham...
The international break is here and so what better time for Premier League clubs to take stock of their [ ... ]
football
LIVE Football Blog: All The Latest News From The World Of Football
Today we get our afternoon started with the Women's North London Derby between Arsenal and Tottenham, [ ... ]
football
What The 'Big Six' Premier League Managers Need From This International...
International breaks are strange times when you’re a club manager. At the top end of the Premier [ ... ]
football
Granit Xhaka: Arsenal Midfielder's Renaissance Is No Surprise
Arsenal have been a joy to watch. When was the last time we said that? Mikel Arteta’s side [ ... ]
football
Italy 1-0 England: Three Lions Relegated From Nations League...
England fell to another painful defeat to Italy which this time saw them relegated from League A of [ ... ]
football
Women's Super League Week 2: Arsenal Hammer Spurs In North London...
Arsenal 4-0 Tottenham Hotspur  The North London Derby at the Emirates Stadium didn't disappoint, [ ... ]
football
Brendan Rodgers Has Punched Above His Weight At Both Liverpool...
Brendan Rodgers is sleeping with a suitcase under his bed right now. It feels like this is the end game [ ... ]
football
Bukayo Saka Named England Player Of The Year For 2021-22
Bukayo Saka has been named as England’s Player of the Year for the 2021-22 season. The winger [ ... ]
football
England News: Pope, Henderson And Ramsdale Jockey For Pickford's...
England head into their upcoming international fixtures without Jordan Pickford. The Everton shot-stopper [ ... ]
football
Mourinho And Stormzy: Other Football Stars To Appear In Music...
Jose Mourinho: Managerial maestro. The man who became the first football coach to win the [ ... ]
football
Cost Of Living Crisis: Mansfield Town Become First Club To Move...
Mansfield Town have announced that their forthcoming home match against Walsall has been brought forward [ ... ]
football
Paul Merson Reveals That Matt Le Tissier Was Warned Before Sky...
Paul Merson has revealed that his friend and former Sky Sports colleague Matt Le Tissier was given several [ ... ]
football
Italy vs. England: How The Three Lions Should Look Based On...
Today’s the day. England take on Italy in Milan in what is a crunch clash between the Euro 2020 [ ... ]
football
LIVE Football News: England Take On Italy In Crucial UEFA Nations...
Welcome to The Sportsman's LIVE football blog, where we will be bringing you all the biggest and [ ... ]
football
Italy Vs England: Tomori And Abraham's Serie A Experience Is...
As England prepare to face Italy in their Nations League clash on Friday, Gareth Southgate’s side [ ... ]
football
Belgium Vs Wales: Kevin De Bruyne Demonstrates His Genius
Belgium’s 2-1 victory over Wales was the case of one talisman triumphing over another. Kevin De [ ... ]
football
Who Are The Fastest, Strongest & Most Aggressive Premier League...
We are now just eight days away from the full launch of EA Sports’ final FIFA title, FIFA 23, [ ... ]
football
The Best XI Across Europe's Top Five Leagues So Far In 2022-23
The final international break ahead of the Qatar World Cup is underway and while fans are thinking at [ ... ]
football
Euro 2028: Why Bigger Isn't Always Better When It Comes To Stadiums
The United Kingdom and Ireland’s joint-bid to host Euro 2028 is gathering pace and now we have [ ... ]
football
Derby County Announce Paul Warne As Their New Head Coach
Derby County have announced the appointment of Paul Warne as their new manager to replace interim boss [ ... ]
football
Belgium And Their Golden Generation - Underperformers Or Just...
Ah Belgium. The land of waffles, Manneken Pis and underperforming international footballers. If England’s [ ... ]
football
West Ham United Announce Mark Noble Will Become New Sporting...
Former West Ham United midfielder Mark Noble will become the club’s new sporting director from [ ... ]
football
Thiago Silva And The Oldest Outfield Players In The Premier...
Chelsea's Thiago Silva turns 38 years old today and the centre-back continues to have [ ... ]
football
Grealish Responds To Souness' Criticism And Says Liverpool Legend...
Jack Grealish believes that Graeme Souness has a ‘problem’ with him following more critical [ ... ]
football
LIVE Football News: Wales Take On Belgium In The UEFA Nations...
Welcome to The Sportsman's LIVE football blog, where we will be bringing you all the biggest and [ ... ]
football
Wales Vs Belgium: Wales Won't Have Gareth Bale And The Class...
Wales have done incredible things in recent years. A revival instigated by the late, great Gary Speed [ ... ]