Football
News
The dawn of the Second World War was the last time English football came to a halt
Katherine Lucas
17:06, 13 Mar 2020

The Premier League has now taken the unprecedented step of suspending all games until April 3 at the earliest, due to the coronavirus outbreak. In reality, it’s looking likely that a further postponement will take place in a matter of weeks, amid fears the season could be declared null and void if it can’t be completed in the allotted timeframe.

For Liverpool, in particular, that is unthinkable. It would also raise serious questions about European qualification and which three teams would be relegated, as well as prize money for the individual league placings. We are in unchartered waters, with the only real parallel being the suspension of English football back in 1939 amidst the beginning of the Second World War.

On that occasion, Blackpool were leading the pack, so they might sympathise with the frustration of the current champions-elect, however far apart the two sides may be these days. Aside from the desolation to communities across Britain, the prospect of keeping calm and carrying on simply was not viable. Hundreds of professional footballers had, in fact, joined the war effort, which meant the traditional ‘squads’ were effectively abandoned.

Some top-flight teams, continued their fixtures in the early months, utilising over 150 different players in that time, as so many of their original line-up were called up to the war effort. Most clubs eventually gave up and withdrew of their own accord.

While the top flight did not return until the end of the conflict – the 1946/47 season being the first full term, with the FA Cup coming back a year earlier - it was replaced by regional leagues. 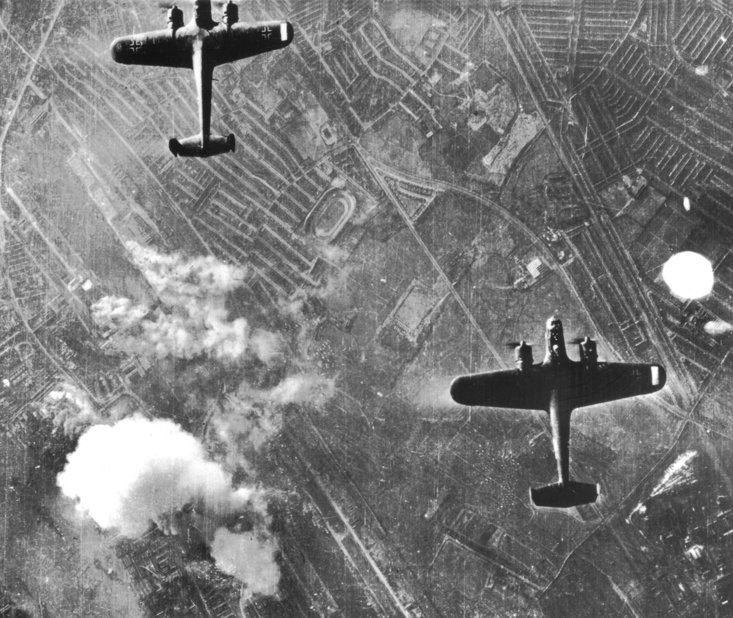 the Luftwaffe flying over the Royal Victoria Docks and Silverstown, West Ham in 1940

Yet elsewhere, more traditional hostilities were put aside, Tottenham sharing White Hart Lane with Arsenal when Highbury was requisitioned as a first-aid training centre and became the headquarters for north London’s air raid precautions. Then, by September of 1940, White Hart Lane’s East Stand was closed too. It had been commandeered as a mortuary for victims of the Blitz.

In the absence of a professional game, English football fell back on its amateur enthusiasts. With uncertainty about when the 2019/20 season will return, so it may have to again. Perhaps in all of this there will be a much-needed fillip for non-league clubs, should they continue to press on outside the jurisdiction of the elite football authorities.

The game proved, as it does today even in its absence, an escape for millions during the most traumatic of times. And as Jurgen Klopp put it today, it remains the most important of the least important things.