Rugby League
News
Lam will be at the heart of it during Saturday's cup final double header at the Tottenham Hotspur Stadium
George Riley
12:30, 25 May 2022

Saturday’s cup final double header in the unique setting of the Tottenham Hotspur Stadium provides four squads of players with the opportunity of a lifetime.

There feels as much noise around the 1895 Cup final showdown between Championship thoroughbreds Leigh and Featherstone as there is anticipation for the Betfred Challenge Cup denouement featuring Wigan and Huddersfield.

These moments don’t come around often for rugby league players, and the 68 players on duty are being urged to seize the moment.

“It’s even more special for me with Wigan in the final as I’m absolutely still a Wigan fan,” Leigh head coach Adrian Lam tells The Sportsman.

“I’ve won a Challenge Cup playing for them and it’s one of the best moments of my life.”

Lam will be at the heart of it on Saturday.

The popular former Papua New Guinea international still bleeds the Cherry and White of Wigan for whom he played 119 times. He pinpoints lifting that iconic trophy as a player in 2002 as the fulfilment of a dream. A dream born in the garden of his family home in Rabaul, a township on the island of New Britain, where he would sit digging Second World War bullets out from the soil.

20 years on from achieving that dream and Wigan go for Cup win number 20, with Lam ready to be the chief cheerleader after his Leigh side face Featherstone at noon in the curtain-raiser.

“The Challenge Cup and Wigan have had a romance over a long period of time,” says Lam who also coached the Warriors before moving to Leigh.

“It is probably the one competition that belongs to Wigan I would say.

“Other clubs may argue that, but Wigan’s greatest moments have been in this competition. They have great players with great experience and they remain one of the clubs who breed quality youth.” 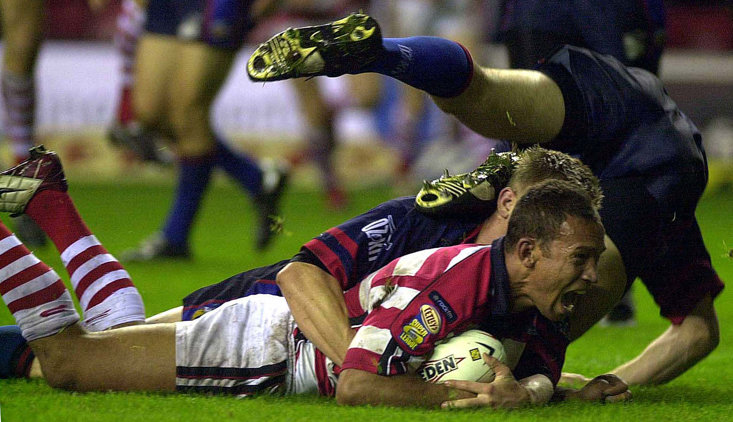 Lam is just as familiar with heartache on the big occasion as he is the euphoria of victory however. Perhaps more so.

He was also on the wrong end of the most dramatic ever Grand Final as coach of Wigan when St Helens struck in the final seconds two years ago.

“These are the times as a coach you wish you were playing,” he admits. “The only times you really feel it and miss it.”

Lam’s big-game experience will be put to the sternest possible test on Saturday when he squares up to Featherstone’s no-nonsense head coach Brian McDermott, a specialist in winning finals at Leeds where he became Super League’s most successful ever coach.

“We set a goal at the start of the year to be in this game so we are looking forward to it,” says Lam of the 1895 Cup final - the one chance for clubs outside of Super League to lift Cup silverware.

It puts together two sides who expect to contest the Betfred Championship Grand Final at the end of the season, with a visible gap in quality between them and the rest.

“People are right to look at us and Featherstone. Our squad is brand new so it’s been a hell of a journey to bring it together and we’ll need a mighty effort on Saturday to win the game,” he says.

“It’s a big opportunity for the club and the fans to enjoy a big day. There’s pressure on the team but we’ll take it in our stride.”

Lam faces a fight just to watch all of the Final however. I’m told Leigh’s team bus is scheduled to return back north at half-time of Wigan’s clash with Huddersfield, presenting Lam with a decision to make.

The occasion itself sees rugby league back in front of millions of terrestrial TV viewers, another opportunity to demonstrate the raw beauty of the sport to the wider audience in World Cup year.

Attendance concerns are understandable after a 20,000 aggregate gate for the semi-final triple header. Indeed I would expect visibly empty seating chunks to be an unfortunate inevitability and hope the broadcast coverage and ticket allocations have been a bit cuter aesthetically in that respect.

All Lam, his fellow coaches and the players can do though is produce the kind of sporting theatre that has made so many of us fall in love with the sport and I have absolutely no doubt they will do so.

Tottenham is in for a treat.