Rugby League
News
St Helens face Penrith Panthers at the start of February, allowing their international stars to get over the disappointment of World Cup failure
George Riley
17:00, 20 Jan 2023

Deep into the final month of pre-season and there’s an odd emotional balance between domestic excitement and international frustration.

Champions St Helens are champing at the bit to finally get a crack at being crowned World Club champions, when they fly out to lock horns with NRL gods Penrith Panthers at the start of February. The fixture has been a huge help in allowing Saints’ international stars to get over the crushing disappointment of World Cup failure.

Yet despite all assurances and positive sounds to the contrary in the tournament’s slipstream, the new season looks set to start without an international calendar locked in.

“You can’t be going into the season not knowing what’s happening at the end of it. Hopefully that gets resolved and we know what the international calendar looks like.”

As it stands, England will play France, again, in a double-header in April. And at the moment that is it. Tonga’s players have been consulted over a potential series with England at the end of the year, but there are still no noises out of Australia and New Zealand.

The concern must be that with the evolution of the Pacific Islands, such is the current strength of competition in the Southern Hemisphere, why would you want or need to fly over for a series against England in November anyway? Samoa, Tonga, Fiji, New Zealand, Australia can all just play each other.

England’s players were left devastated by their semi-final exit to Samoa in a World Cup they felt well set to win, or at least challenge the Aussies at Old Trafford.

The strength of that stinging disappointment has still not worn off. Veteran forward Chris Hill’s kit bag, hurled into the house on his return from England duty, was still sat sadly in its landing position weeks later. The only way to get over such crushing disappointment is to get back out there as quickly as possible. So it has been a long winter.

“The World Cup defeat is probably something you don’t really get over,” Knowles adds.

“It will always be something you look back on and be disappointed. It was an opportunity missed and was frustrating how it was. We are good enough to do better and just didn’t. That’s hard, tough to take, but the season rolls around quick and having this World Club Challenge helps.” 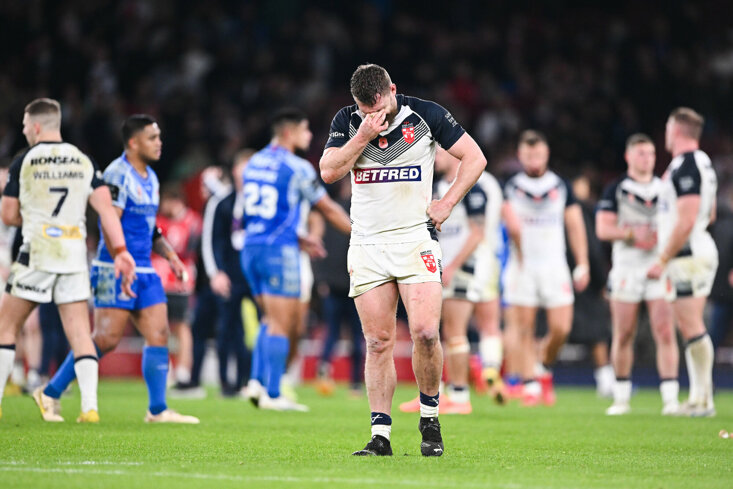 There is genuine excitement at every club ahead of the new campaign, with rival Super League clubs rebuilding to have a crack at dethroning Saints, and top Championship clubs jostling for a high-end position in the hierarchy behind them.

A host of friendlies take place over the next few weeks, with Saints’ trip to Australia the most heavyweight of them. Not that it is a friendly of course, it is quite the opposite. But that is exactly how the Aussie champions have been accused of treating the fixture in their trips to the UK in winter's past. Saints though are desperate to restore this game to a position of strength and significance. They want all of the Panthers’ international superstars to play. And they want every single set of British rugby league fans behind them.

“Super League gets put down as a second tier competition with what they think of us, so hopefully people can get behind us and not be so strict on supporting their own team,” says Knowles.

“Back us to put on a good show - for Saints, Super League and for England. It might be a tough ask to say that in Wigan though, it might not go down too well.

“It is exciting, a big competition and something we really want to win. This opportunity has been taken away from us the last couple of years and it is even more important to get out there and get the job done.”

Elsewhere this week the leading England Women’s international Amy Hardcastle made a headline move from Saints to Leeds, who will be paying their players for the first time this coming season.

A host of England stars including winger Tommy Makinson threw their support behind Shaun Wane to stay on as head coach despite their World Cup heartache.

And Salford turned to another England star Kallum Watkins as their new captain. Watkins previously spent a season as skipper of Leeds, and has told The Sportsman how he never felt a natural, vocal leader, given he was always one of the quietest players in camp. He hopes instead to lead by example through his actions he says, having played a leading role alongside Tim Lafai, Brodie Croft, Marc Sneyd and Ryan Brierley as the Red Devils proved the surprise package of the 2022 Betfred Super League season, coming within minutes of a place in the Grand Final.