Reigning champions Portugal left it late to overcome an organised Hungary outfit as Cristiano Ronaldo became the all-time leading goalscorer in European Championship history with his brace in a 3-0 win in Budapest.

Raphael Guerreiro’s deflected effort broke the deadlock on 84 minutes, before Ronaldo wrapped up the win with two strikes to take his tally to 11 goals in five European finals tournaments.

A 3-0 scoreline doesn’t offer a true reflection of a very competitive game, with those inside the Hungary camp adamant that they have been underestimated in the build-up to the ‘Group of Death’ containing today’s opponents as well as France and Germany. They may not be the force of yesteryear that finished as runners-up in two World Cups, but the Hungarians have once again proved that they are no pushovers. Let’s not forget that they topped a group containing Portugal back in Euro 2016, with Ronaldo and company drawing all three games and sneaking through the back door on the way to being crowned champions of Europe.

Marco Rossi’s men possess one considerable equaliser, that perhaps hasn’t been given the airtime it deserves – their fans. Budapest’s Puskás Aréna boasted an attendance of 67,000, the biggest showing in the city for nearly 40 years, and the fever pitch atmosphere didn’t let up throughout.

Cheering on every attack and jeering every Portuguese threat, their passionate fans acted as the 12th man for their heroes, and will be back in fine voice when tournament favourites France roll into town on Saturday afternoon.

While the home side proved to the watching world that they are contenders in Group F, Fernando Santos’ men could well have been out of sight at the interval. 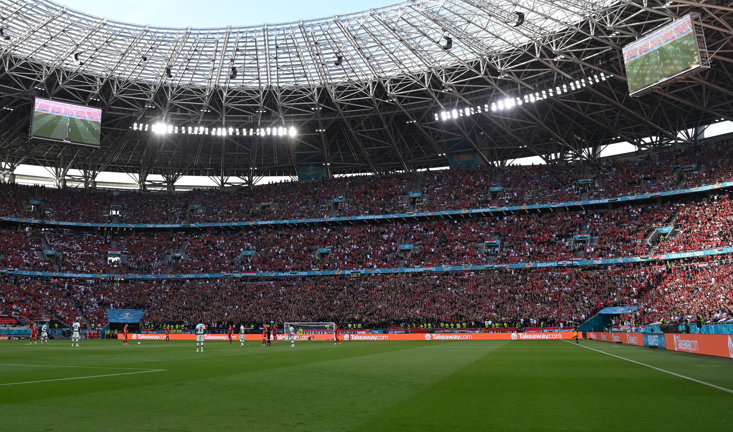 Diogo Jota wasted glorious opportunities on more than one occasion in the first half, choosing to shoot when captain Ronaldo was unmarked inside the area. The 36-year-old was in no mood to hide his annoyance at the Liverpool man, with Portugal’s frustrations clear.

Ronaldo's first chance to break Michel Platini’s record of nine European Championship goals came moments before the break, but the Juventus man uncharacteristically fired his close-range effort over the bar. Portugal enjoyed 67% of the ball in the opening period, and the feeling was that more of the same would lead to them finding the breakthrough after the restart.

However, it was the home side who came out looking the more likely, and their fighting spirit appeared to have been rewarded when Szabolcs Schon broke through and fired past Rui Patricio at his near post, only for his effort to be correctly ruled out for offside.

That moment proved to be the wake-up call for the reigning champions, with Raphael Guerreiro’s strike cruelly deflecting past the hapless Péter Gulácsi to give Portugal a crucial lead. The result was put beyond doubt just two minutes later when Rafa Silva was brought down inside the area.

Up stepped Ronaldo to casually slot home and break Platini’s record to become the all-time highest goalscorer in Euros history. He doubled his tally with a composed finish from close range with just minutes left on the clock, with the former Real Madrid star now sat on 11 goals from five European Championships.

With games against France and Germany to follow, the importance of an opening three points cannot be understated.

A three-goal defeat was extremely harsh on a battling Hungary side, but it was Ronaldo and his troops celebrating a record-breaking win in front of a full house in Budapest.

He is clearly in the mood this summer, and that’s a very dangerous prospect for the other nations with an eye on European glory.