Cristiano Ronaldo insists he will banish all thoughts of personal records and a summer move from Juventus to give his full focus to Portugal’s European Championship title defence which starts against Hungary on Tuesday.

The 36-year-old Portugal captain and talisman can either break, equal or extend any number of individual records during Euro 2020. And after a barnstorming third season at Juventus, in which he grabbed 36 goals, there is talk even of a move away from Turin and back to Manchester United or to Paris Saint Germain.

Ronaldo, set to win a 176th cap against Hungary in Budapest, is only five goals off the all-time international scoring record of 109 set by Iran’s Ali Daei. If he plays any part for Portugal, his appearance at a fifth European Championship would be a new record, as would be his next goal - a 10th goal in the showpiece edging him one ahead of Michel Platini.

As with other players at the finals, Ronaldo has been the subject of transfer speculation. But he has pulled down the shutters on speculation about a move, and made it clear that he is all about the Selecao at Euro 2020.

“Transfer? I’m not even there," Ronaldo told reporters on Monday. "I’ve played as a professional at the highest level for 18 years already. I’m not even there for this kind of rumours. If I was a player starting now, 18 years old, maybe I’ll be nervous and shaking, or would not be able to sleep at night thinking about it. But now… whatever might come will be surely for the best. My focus is all on national team. You don’t play an event this big every day!

“It’s my fifth European Championship but in my mind it is like if it is going to be the first one! I am not focused on individual records: thing come by naturally. They’re not my obsession, it does not bring extra pressure on me. If I [break the goals record], it will be good perhaps because it means that Portugal is on a good path to keep the crown. 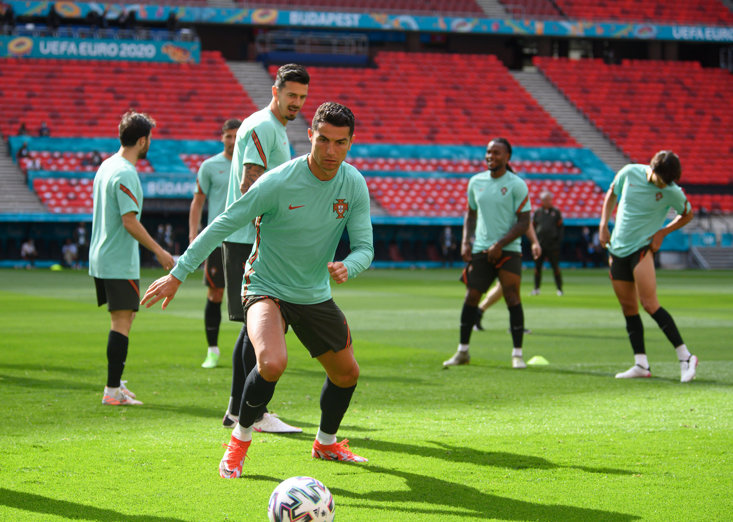 RONALDO IN TRAINING ON MONDAY AHEAD OF THE HUNGARY FIXTURE

“If it’s not going to be this first match, it will be in the next one or maybe in the third match. Portugal’s victory comes first, results matter - all the rest is just crap. It’s not like one of those records takes me to the moon. I’ll be mad with delight if we win the Euros twice in a row, that will make me happy. There is a beautiful record to achieve!”

Portugal have been placed in the ‘Group of Death’ alongside world champions France and the three-time tournament winners Germany. So a good result in the opener away to arguably the weakest team in the pool is essential.

Ronaldo added: “The team is ready, and winning first match can be crucial in this kind of competition. We know Hungary are a very organised team and with the fans supporting them, but that is football's charm: the most important thing is to have the fans back in the stands and enjoy the event.

“But our team’s spirit is as it was for France 2016. We are ready, but we now we’re going to face the home team in a crowded stadium. But we are in peace and we all want to start in the best possible way, on the front foot and in the right way, winning. We’re focused, and have a positive spirit. We’ll try to play well and win but if you tell me we’re going to win playing badly, I’ll buy it immediately.

“I’ll be playing up front, as usual, but it does not matter whether is it’s going to be in the middle or behind a striker or even on the right or left wing. I’ll play wherever the coach thinks I can most help the team to win. That’s what matters.”

And Ronaldo had words of sympathy for Manchester City’s Joao Cancelo, who tested positive for Covid-19 and so was excluded from the squad – but insisted it would not deflect their focus.

He added: “I felt sorry for him, but the rest of the players have no stress about Covid. We’re all tired of living with it but we have all learned how to cope with it. Make no mistake, the pandemic situation is still bad, but Portugal is focused on the Euros, being the first Euros for most of them makes it very important. External factors don’t disturb our concentration, I can assure you.”