Football
News
There was plenty going on this weekend besides Gareth Bale's return
Kris Voakes
13:00, 21 Sep 2020

Managers can’t manage masks, fans are finding new ways to hail their heroes, and Jurgen Klopp doesn’t like anything short of professionalism from his staff. Here are five football stories you might have missed this weekend...

Slaven Bilic needs lessons in how to wear a facemask

Saturday wasn’t one of Slaven Bilic’s better days. Following Kieran Gibbs’ sending-off shortly before half-time in West Brom’s 5-2 defeat at Everton, the Baggies’ boss was himself dismissed for asking for an explanation from referee Mike Dean.

But things didn’t exactly improve from there for the imposing Croatian. Having been sent to the stands for the second half, Bilic found himself in close proximity to the press box, and was forced to listen on as various commentators found increasingly damning ways to describe his side’s various shortcomings.

One of those was BBC Five Live’s Juliette Ferrington, who revealed on air that Bilic had repeatedly fallen foul of the Goodison Park stewards, due to his apparent inability to apply his face mask properly.

“Not only did he get sent off, but he kept getting told off by the stewards here because his face covering wasn’t fully covering his nose and mouth,” explained Ferrington.

Given his intimidating reputation, we can only imagine the arguments between the stewards as to which one would tell him he needed to get his mask on properly or get out. 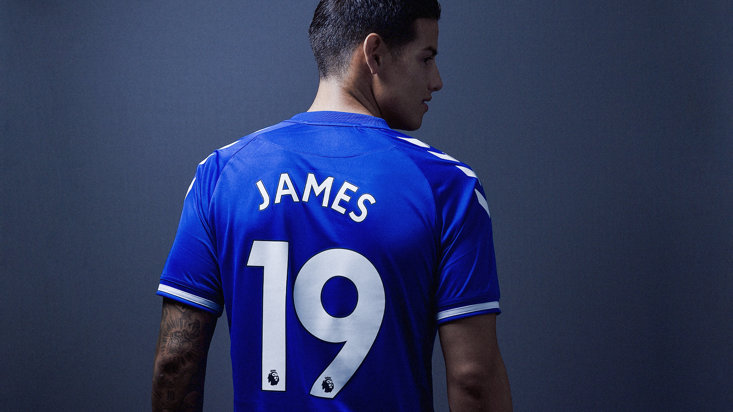 James gets wined - if not dined - by Everton fans

There was a bit more of a celebratory feel for Evertonians after their impressive win against Bilic’s West Brom, as evidenced on the streets outside Goodison following the match.

With no fans being allowed into the ground for the time being, supporters have been forced to find more unorthodox ways to show their appreciation of their heroes, and a group of Toffees had a surprise in store for Everton’s star summer signing James Rodriguez as he drove away from the stadium on Saturday.

After pulling up in the road outside a pub full of football fans, James was encouraged to wind down his window so that one supporter could hand him a cheap bottle of Rosé wine, as a thank you for his inspiring performances against Tottenham and West Brom over the last couple of weekends.

The fan went on to blow James a kiss, but stopped short of passing over the four cans of lager he had dangling from his other hand. Maybe it will take a few more star showings from the Colombian before they are willing to part with the beer too. Either way, we hope for all concerned he was Covid-free!

The big news in the transfer world this weekend was nothing to do with Gareth Bale or Thiago Alcantara, not Sergio Reguillon nor Diogo Jota. It wasn’t even Max Aarons being chased by Barcelona.

It was, in fact, the return of The Undertaker. Sort of.

We have all seen the shot of the WWE legend’s iconic retirement from the squared circle, when he placed his hat, cloak and gloves in a pile in the centre of the ring following his Wrestlemania 33 loss to Roman Reigns in Orlando, Florida. So when Leicester City’s official Twitter account sported a picture recreating the scene in the middle of the King Power Stadium pitch on Sunday morning, it got the Foxes’ wrestling-mad supporters particularly excited.

Within 30 minutes the club followed up with the news that they had taken Roma’s Turkey international Cengiz Under on loan, making the hashtag #UnderTaken the talk of social media. A smart move for the club, and a clever bit of work from the Twitter team.

Klopp stands no nonsense from his staff members

When Andreas Christensen was sent off for his perfectly-executed (rugby) tackle on Sadio Mane on Sunday, it felt like a huge moment in Liverpool’s quest to see off Chelsea at Stamford Bridge. So perhaps it was understandable if Reds supporters would have been celebrating the Dane’s dismissal.

However, Jurgen Klopp was far from happy with the exultations of one Liverpool staff member sitting in the stand behind the dug-out, when referee Paul Tierney eventually produced the red card.  The German was quick to turn around and make his displeasure known.

Journalist Julien Laurens revealed on Twitter that Klopp bellowed, “Are you crazy? We never ever do that, ok?”

When pressed on the episode after the match, the Reds boss explained, “It was a member of staff and I told him already what I think about it and he’s good with that. But in the moment that’s something I don’t want to see.”

All’s well that ends well, though, and Liverpool’s Mane-inspired 2-0 win will have softened the mood between Klopp and his chastened colleague. 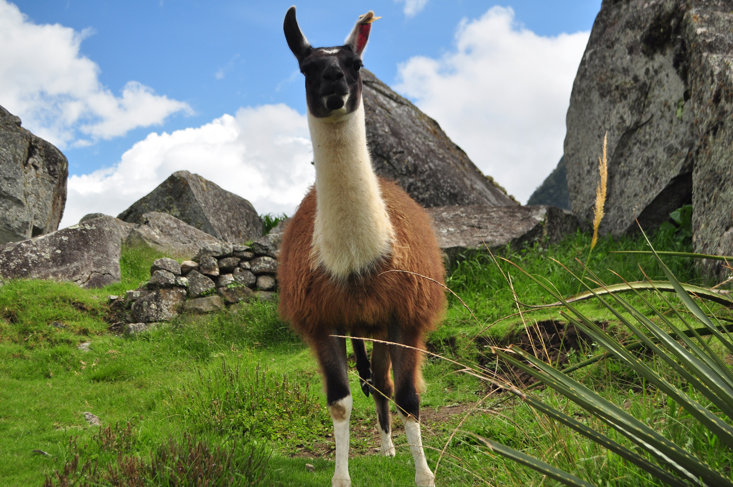 Intruders come in all shapes and sizes

Another week, another random delay to a football match. Remember last Saturday when Fleetwood Town fans chucked apples over the stand to cause a temporary suspension to their opening game of the season? Well this weekend we had an alpaca creating havoc at a non-league match in Wakefield.

Yes, you read that right. An alpaca.

The unlikely intervention came during the clash between west Yorkshire rivals Carlton Athletic and Ilkley Town, with players from both sides left absolutely bemused as the fluffy mammal came marauding across the centre of the field.

After forcing one Ilkley player into a quick body swerve, the alpaca stopped momentarily near the dug-outs, presumably in the hunt for some water or a spare half-time orange, before beating a hasty retreat.

x
Suggested Searches:
Tyson Fury
Manchester United
Marcus Rashford
Lewis Hamilton
F1
Air Jordan
More
football
Chelsea 0-0 Brighton Was Tedious But At Least The Premier League...
As Chelsea drew 0-0 at home to Brighton at Stamford Bridge to edge into the top four, it was a game [ ... ]
football
Football Unites To Stop Super League As Ed Woodward Resigns...
The European Super League seems dead in the water. Chelsea are reportedly looking to pull out, as are [ ... ]
football
Ryan Mason And Others Who Became Coaches After Playing Careers...
Ryan Mason will take interim charge of Tottenham when they host Southampton on Wednesday night before [ ... ]
football
Ask The Fans: We Will Never Accept This Chaotic NBA-Style Super...
From fans and pundits to players and managers, it is clear that the vast majority in England are against [ ... ]
football
Premier League Fixtures: Everything You Need To Know Ahead Of...
Three European Super League clubs are in action… sorry, three of the Premier League’s ‘Big [ ... ]
football
European Super League Will Rob Fans But Players Will Pay A Hefty...
‘Football is for the fans’, read the Leeds United t-shirts as they warmed up against Liverpool, [ ... ]
football
Leeds Score Late Leveller To Deny Liverpool Top Four Spot
Leeds will have seemingly had more fans backing them than usual on Monday night when they hosted Liverpool [ ... ]
football
Gary Neville And Jamie Carragher Urge Fans To Come Together...
Jamie Carragher has urged football fans to come together to stop the proposed Super League which has [ ... ]
football
Women's Super League: Title Decider Heads Three Key Games In...
Right, enough of all that other nonsense, here’s a Super League we can all get behind. The WSL [ ... ]
football
Could Man Of The People Jurgen Klopp Leave Liverpool After Super...
Jurgen Klopp has always been a man of the people. Whether you love Liverpool or truly despise them, [ ... ]
football
Jose Mourinho Sacked By Tottenham: Three Key Moments That Led...
Jose Mourinho has been sacked by Tottenham Hotspur less than a week before the League Cup final. He [ ... ]
football
European Super League Explained: Here's Everything We Know So...
Competitive football as we know it is being stolen by the so-called ‘biggest’ clubs in Europe [ ... ]
football
Kelechi Iheanacho Fires Leicester Into FA Cup Final For First...
Kelechi Iheanacho continued his stunning form in front of goal to fire Leicester City into the FA Cup [ ... ]
football
Man United Leave It Late To Beat Burnley As Mason Greenwood...
Manchester United last beat Burnley at Old Trafford back in February 2015 heading into this one. And [ ... ]
football
Fulham Suffer Heartbreaking Blow As Arsenal Score 97th Minute...
Fulham were cruelly denied an historic victory and a massive three points as Arsenal scored an equaliser [ ... ]
football
Leicester FA Cup Triumph Can Offset Top Four Worries And Show...
Leicester are flagging badly but this weekend’s FA Cup semi-final against Southampton could be [ ... ]
football
Chelsea End Man City’s Quad Dreams And Reach Fourth FA Cup Final...
Manchester City’s unprecedented quadruple dream came crashing down on Saturday evening after they [ ... ]
football
Norwich City Seal Fourth Premier League Promotion In A Decade
The Canaries don’t even kick a ball until Saturday evening but thanks to Swansea City and Brentford’s [ ... ]
football
Newcastle United Move Nine Points Clear Of The Drop After Win...
Newcastle United took another step towards securing their safety in the Premier League with a 3-2 win [ ... ]
football
Championship Relegation Battle Analysed: Which Team Has The...
Coventry’s 1-0 at Rotherham on Thursday night felt monumental in the Championship and with Norwich [ ... ]
football
Harry Kane Scores Brace But Spurs Top Four Hopes Are Dented...
Harry Kane continued his glorious scoring form against Everton by netting a brace which put him ahead [ ... ]
football
Everton And Tottenham's Faint Top Four Hopes Dangling On Their...
The games have come thick and fast and now we’re entering the business end of the season where [ ... ]
football
Aidy Boothroyd Sacked: Frank Lampard ''Perfect'' For England...
Aidy Boothroyd has been dismissed as England U21 manager after seven years in the England set-up. After [ ... ]
football
Arsenal Cruise Into Europa League Semis With Commanding Win...
Arsenal cruised into the Europa League semi-finals thanks to a phenomenal first-half performance, beating [ ... ]
football
Manchester City's Quadruple Hopes Enter Decisive Eleven Days...
As Phil Foden rattled in the final goal off the Borussia Dortmund post, it was definitive. Manchester [ ... ]
football
Premier League Fixtures: Everything You Need To Know Ahead Of...
The Premier League is here though we have a fractured programme of fixtures owing to the semi-finals [ ... ]
football
Arsenal's Season Rests On The Europa League And Mikel Arteta...
The most important game of Mikel Arteta’s short managerial career? Quite possibly. The biggest [ ... ]
football
Hillsborough, April 15, 1989: Remembering One Of Football's...
On April 15 1989, a warm, sunny, spring afternoon, Sheffield Wednesday’s Hillsborough stadium [ ... ]
football
Quad Dream Remains Alive As Pep And Man City Advance To Champions...
Pep Guardiola reached his first Champions League semi-final with Manchester City after coming from behind [ ... ]
football
Manchester City Ready To End Champions League Quarters Curse...
If Manchester City are to win a historic and unfathomable quadruple this season, they must break their [ ... ]