Football
News
An unconvincing win in St Petersburg told us much about the Russians' shortcomings
Gary Maiden
16:01, 16 Jun 2021

Russia kept their hopes of qualifying for the knockout stage of Euro 2020 alive with a hard-fought 1-0 win over a battling Finland in St Petersburg. The three points were crucial, but manager Stanislav Cherchesov will be only too aware that his side lack the necessary quality to trouble the big boys in this tournament.

After a convincing 3-0 defeat at the hands of Belgium in their opener, another point against a Denmark outfit with their minds quite rightly elsewhere will likely see the 2018 World Cup hosts through to the last 16. In reality, the current format lends itself to nations of Russia’s standing, with four points usually enough to clinch qualification.

However, the manner of their performance against tournament minnows Finland won’t exactly frighten any potential opponents should they make it out of Group B.

The home side were very nearly embarrassed within the opening five minutes, when Joel Pohjanpalo, scorer of that winning goal against Denmark, popped up again to seemingly put Finland into another unlikely lead. The goal was given by referee Danny Makkelie, only for the VAR to rule it out after an agonisingly tight offside in the build up.

That scare served as a wake-up call for the Russians, who should have gone ahead themselves through Magomed Ozdoev when he lost his composure and fired over from close range.

Cherchesov has already seen veteran Yury Zhirkov ruled out for the remainder of the tournament after the injury he sustained against Belgium, and there was more injury woes for his side with Mario Fernandes being withdrawn following an awkward landing. 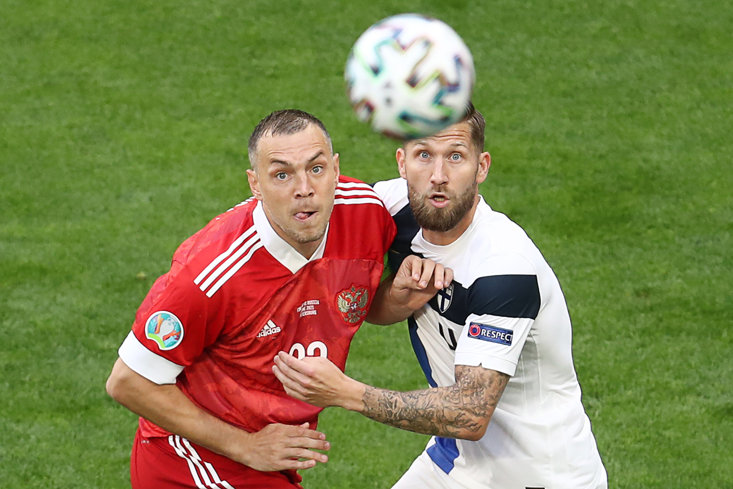 Russia continued to press with half-time approaching and only a superb last-ditch challenge from Jere Uronen prevented Vyacheslav Karavaev from putting the hosts ahead. The 40-minute mark came and went, meaning that this game had seen fans wait the longest period yet for a shot on target.

However, if their patience was beginning to be tested, the Russian crowd was soon on their feet when Aleksey Miranchuk found some space inside the area and used his quick feet to lift a left-footed curling strike into the far corner.

It was a rare moment of quality in an otherwise poor first half, although Artem Dzyuba could have doubled the lead moments later only for his effort to fizzle out of play and see Russia take a slender lead into the second half.

Aleksandr Golovin showed another moment of class when his effort from 25 yards went just wide with Russia desperate to put the game beyond doubt. Their nerves were tested 10 minutes into the second half with Teemu Pukki and Robin Lod both going close for a tiring Finland.

Pukki, clearly lacking in match fitness, was withdrawn with 15 minutes left on the clock and Finland struggled to make the most of their late possession as Russia held on for a vital victory.

A forgettable 90 minutes may have seen the home side celebrating at full-time, but they will know that improvements are required if they are to get a positive result against Denmark, never mind make an impression in the latter stages.

As for Finland, their moment of glory came from recording a memorable win in their opening game, although the game did pale into insignificance with the thoughts of Christian Eriken on the minds of the football world.

Markku Kanerva’s men need to get a result against the world’s best-ranked side in Belgium to stand a chance of qualifying. It may be the end of the road for a brave Finland, but on this showing Russia may not be far behind them.