St Helens will meet Catalans Dragons in the Super League Grand Final after beating Leeds Rhinos 36-8. Kristian Woolf’s side outscored their opponents six tries to two in a fairly dominant display, but Rhinos kept things exciting right up until the end on an atmospheric night at the Totally Wicked Stadium.

The game was in danger of becoming a rout early in the first half. An early Lachlan Coote fumble for a knock-on was as good as it got for Rhinos in the first half hour, as Saints immediately put them under pressure. There were barely five minutes on the clock when Jonny Lomax passed wide to the on-rushing Regan Grace, who powered over the line for a try. St Helens couldn’t convert, but were playing at a pace The Loiners could not match. Grace tried to repeat the trick, targeting Rhinos’ right side, but ran into the purple wall in defence.

Saints piled on the pressure, with Alex Walmsley leading the charge. One run in particular saw the prop power through several tackles down the centre to gain significant ground for his team. His efforts would be rewarded when St Helens won a penalty after Rhyse Martin went in hard on Sione Mata'utia. Coote hit the target to extend the deficit. The fullback earned and scored a penalty himself when Tom Briscoe was sent to the sin bin for a high tackle that resembled a WWE clothesline. 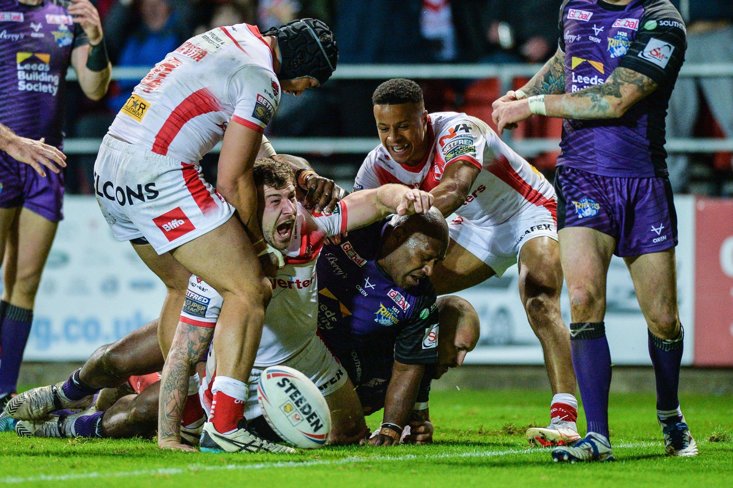 Saints made their man advantage count and wasted little time pressuring Leeds. The ever-dangerous Walmsley caused havoc in the Leeds defence again to feed James Roby, and the captain obliged with a try. Coote added the two and an absolute thrashing looked to be on the cards. Leeds found their way back into the game though with Richie Meyler spinning over the line. Rhinos fans faced a nervous wait but the video referee saw nothing wrong and the try was given.

The second half saw tempers flare with the Grand Final and a trip to Old Trafford in sight. First James Donaldson was sin-binned for a high tackle. Then a robust but fair Rob Lui challenge on try-scorer Regan Grace sparked a pile-on, with almost every player getting involved in the ensuing fracas. With the game getting scrappy, the next try was vital, and it was Mark Percival who got it for Saints. The centre battered his way through the Leeds defence to score, but it wasn’t converted.

Being a man down weighed heavily on Rhinos, and it wasn’t long before their misery was compounded. After a Luke Briscoe knock-on, St Helens worked the ball out wide for Kevin Naiqama to get on the scoresheet with Coote adding the two. Briscoe would atone for his error with a try of his own but Leeds could not convert. Percival then scored again to add a stylistic flourish to a brilliant night for Saints, Coote once again adding the two to rubber stamp St Helens’ place in the Grand Final.