Football
News
The manager made four alterations against the Czech Republic, and England were better for them
Simon Lillicrap
21:54, 22 Jun 2021

After a stagnant performance against Scotland, Gareth Southgate breathed new life into his England team with four changes, all of which helped to make a difference as England beat the Czech Republic 1-0. It is a result which means the Three Lions top the group and will remain at Wembley for their Euro 2020 last-16 tie.

Kyle Walker, Harry Maguire, Jack Grealish and the standout performer Bukayo Saka all improved an England side who looked desperate to make an impact early on as they started with pace and vigour, a theme that spanned the entirety of an impressive first half. Saka in particular put in a performance that strengthened his claim for a starting spot, as he added pace and direct running to that right-wing position, something that, for all his ability, Phil Foden does not bring to the team.

Grealish was impressive as always but Maguire’s impact at the back was far from just defensive. The Manchester United captain’s ability on the ball cannot be underestimated and despite Tyrone Mings having deputised well, the Three Lions just seemed able to move the ball more quickly with Maguire at the heart of the defence.

At one point he sliced the Czechs wide open with a pass that led to Harry Kane’s first shot on target in the entire tournament. It wasn’t to be in terms of his first England goal at the Euros, but the captain looked much brighter and more involved in the play.

England’s main man in front of goal was once again Raheem Sterling. He hit the post within two minutes after he had made a darting run in behind and was found by Luke Shaw. The Manchester City man got his toe to the ball ahead of the onrushing Czech keeper, but saw his effort bounce back off the post. If England wanted a bright start, this was it.

England’s breakthrough goal came early on as Saka made a driving run into the final third, before the ball eventually came to Grealish on the left wing. He found some space and stood the perfect ball up to Sterling, who nodded in his, and England’s, second goal of the tournament. For a man out of form heading into the tournament, he has looked sharp in front of goal.

Kane had his first shot on target in the tournament when he could have scored after that defence-splitting ball from Maguire put him in. He cleverly cut back onto his stronger right foot but couldn’t beat Tomas Vaclik in the Czech goal. 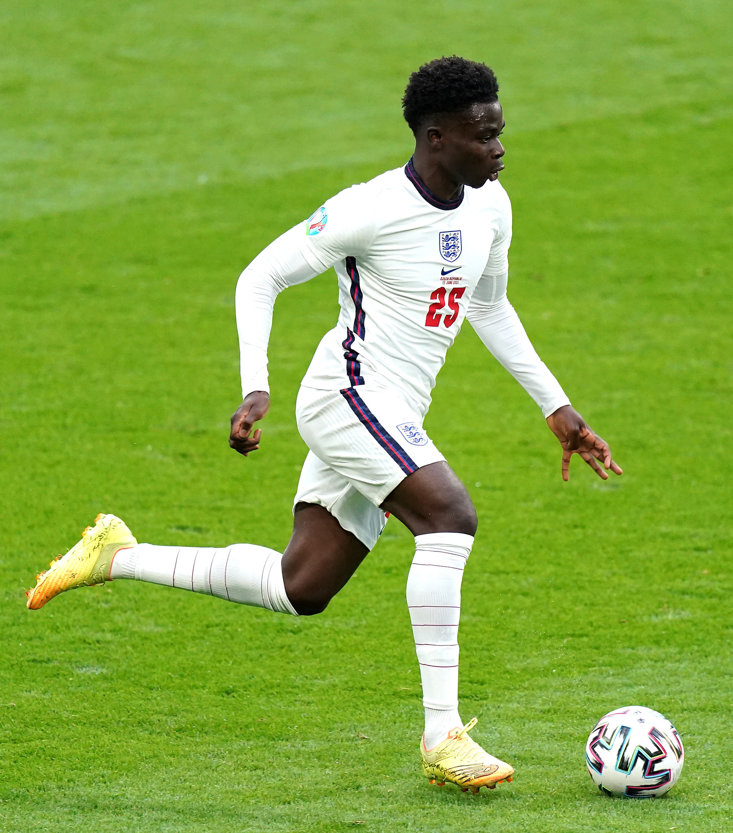 SAKA'S INCLUSION MADE A BIG DIFFERENCE TO ENGLAND'S ATTACK

Jordan Henderson came on for Declan Rice at half-time and the Czechs continued to push for an equaliser. Gaps opened up down the left side of England’s defence and only some good covering work from Saka prevented a shot on target. The changes kept coming for England, Bellingham was handed more minutes as Grealish was withdrawn, surely with the last 16 in mind, while Marcus Rashford, who is yet to start so far, replaced the goalscorer Sterling. We got to see a glimpse of Jadon Sancho, and Tyrone Mings came on for John Stones as Maguire navigated the 90 minutes without issue, but as one of few negatives England once again regressed in the second half.

Henderson thought he had his first England goal late on as he tapped home but he was clearly in an offside position from a Bellingham interception, but aside from that Southgate’s side struggled to create as fluidly as they had in the first half.

Having said that, this is the first time England have made it through a first round group stage without conceding a goal at a tournament since 1966. What ever happened that year? This sort of game management could prove vital as we move into the knockout phase, and England must continue the aggressive, forward-thinking style that saw them take Czech Republic apart with ease in that first 45.

Portugal, France, Germany or Hungary at Wembley? Bring it on.