Football
News
Emma Hayes’ side brushed aside Spurs at the Hive Stadium to return to the top of the table
Kieran Spratt
19:19, 05 May 2021

A Sam Kerr brace helped Chelsea beat Tottenham Hotspur 2-0 at the Hive Stadium on Wednesday evening, putting the Women’s Super League title race into their own hands going into the last game of the season on Sunday.

The Blues returned back to the summit of the table, moving two points clear of second-placed Manchester City heading into the weekend’s grand finale against Reading at Kingsmeadow. Win that and they’ll be crowned champions for back-to-back seasons, regardless of what happens when Manchester City take on ninth-placed West Ham at the same time.

They took a while to get going but Chelsea, who made five changes to the team that beat Bayern Munich on Sunday, were dominant for large portions of the match. Were it not for Spurs goalkeeper Rebecca Spencer, who was outstanding, the margin going into the break would have been much wider.

Speaking after the match to BT Sport, the Chelsea manager said, “I thought we created a lot of chances but just didn’t execute. Becky Spencer kept a couple out in the first half but I thought the timing of the first goal came when we needed it.

“You don’t want to come in at half-time to 0-0. That goal settled everybody.” 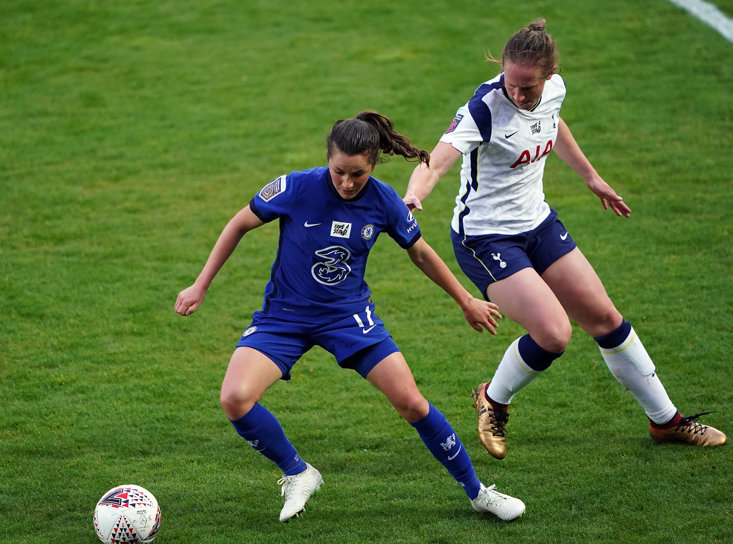 Kerr, who scored both goals for Chelsea, has now bagged 20 in the WSL this season, making her the league’s top-scorer, two ahead of Arsenal’s Vivianne Miedema with one gameweek to go. However, speaking to BT Sport after the match, the Australian insisted that a win this weekend is the only thing that mattered.

“It’s more important that we win on Sunday; that’s the most important thing to me,” she said.

“It’s what I’m paid to do but for me, winning the league is most important and we’ll deal with all of that type of stuff after. We’ve got two massive games to come and we want to win it all.”