The first Grade 1 contest of the season on these shores is the feature of this weekend in the shape of the Betfair Chase at Haydock. Will Bristol De Mai emulate the great Kauto Star with a fourth win in the race? Or will the Irish challenger A Plus Tard take the crown en route to Gold Cup glory?

There is the competitive Betfair Exchange Stayers’ Handicap Hurdle as the day's big betting race, while Ascot also hosts some top class action.

Dashel Drasher seeks an emotional victory at the scene of his greatest triumph at 2.05pm, while Cesarewitch winner Buzz and the enigmatic Goshen clash in the Oral Hurdle at 2:40.

Paul Nicholls has never hidden his admiration for BRAVEMANSGAME and there will be some long faces at Ditcheat if he is beaten here. His chasing debut went very smoothly as he impressed around Newton Abbot, a track you thought maybe sharp enough for him. He beat Fusil Raffles who has subsequently won a Charlie Hall Chase and he was amongst the best British novice hurdlers last season.

He should win although this will be a good test. Itchy Feet was second in the Old Roan last time, behind Allmankind, but ahead of Midnight Shadow, so that form is strong but does have to concede 4lb, while Pay The Piper gave a good account of himself behind leading Ladbrokes Trophy contender Fiddlerontheroof at Carlisle and will also make this a decent contest.

There will not be a dry eye in the house if Dashel Draser can follow up his Ascot Chase success on his reappearance this afternoon. He hasn’t been seen since that big win in February when giving jockey Matt Griffiths his biggest success. Sadly, the jockey suffered a serious brain trauma in a fatal car crash last month and remains in intensive care. Therefore, it would be a very emotional success and he is the solid option against a few with plenty to prove.

Master Tommytucker was just behind Dashel Drasher that day but does have jumping frailties, while Defi Du Seuil is on the comeback trail after disappointing in both starts last season.

Another on a recovery mission is LOSTINTRANSLATION. This weekend last year, he was sent off favourite for the Betfair Chase but the whole season was a write-off. He never showed his true form which includes a 2019 Betfair Chase win and third in the 2020 Cheltenham Gold Cup. The stable never really took off last year either and with another wind operation being performed, it is too soon to write him off with the stable going along much better this season.

This race has been won by subsequent Grade 1 performers Dynaste, Aubusson, Sam Spinner and Paisley Park in the last decade, so it is a noteworthy contest with the future in mind, but also provides a good punter's puzzle this afternoon.

David Pipe has won four of the last eleven renewals, so his pair of Brinkley and Martinhal, in particular, need a second look, while Silver Trophy winner Orby’s Legend and the light-weighted Irish challenger Rightplacerighttime are also worth close attention.

I like two here though. First up is BASS ROCK for Sandy Thomson and Ryan Mania, who won well at Carlisle three weeks ago. The second that day beat a handicap good thing at Market Rasen on Thursday, while the third home, Tommy’s Oscar, runs 1:15pm here this afternoon (I expect him to go close too.) 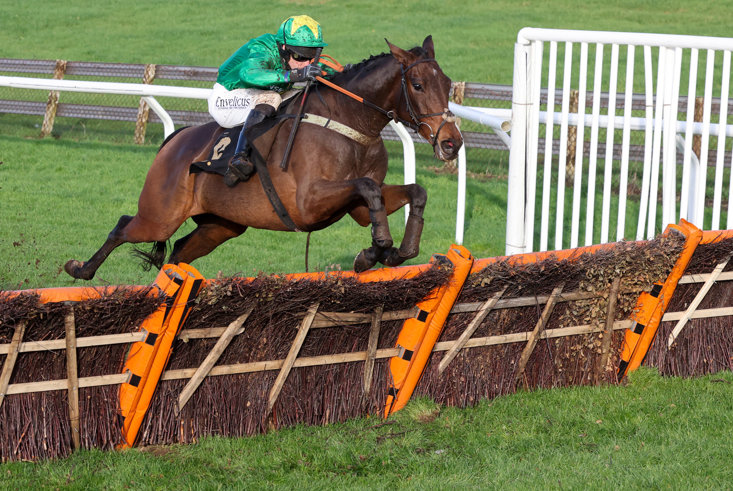 Bass Rock has only had the six starts and as a five-year French bred stepping up in trip, he has the profile of four of the last eleven winners. He will continue to improve and a mark of 130 will not be his ceiling for a horse Mania describes as” The best in the yard” at Sandy Thomson’s.

The other selection is GLADIATEUR ALLEN. He was a well-beaten third on soft ground at Ffos Las on his seasonal return when racing far too keenly but on his third at Sandown in March, he looks well treated off a 2lb lower mark. The quicker pace and deeper field will help him settle here and the yard remains in really good form. He rates a solid each-way play at around 14/1 with extra places on offer.

SONG FOR SOMEONE landed last year’s Coral Hurdle en route to International Hurdle glory at Cheltenham the following month. He was put in his place at Wincanton by Goshen but that was on heavy ground, and he was pulled up on his final start at Aintree. He has had a wind operation over the summer and has an excellent record fresh, so this is the time to catch him. Connections were contemplating a trip to Newcastle for the Fighting Fifth next Saturday but have decided to try and retain his title here.

Goshen needs rain to be at his best and may not get it. He is talented as we know but continues to blot his copybook and can never be confident he will put his best foot forward. Buzz meanwhile ran out a cosy winner of the Cesarewitch last month and was second in the Aintree Hurdle when last seen over obstacles. He gets weight of Song For Someone and Goshen but is short enough in the market considering he was beaten in two handicaps last season.

Molly Olly Wishes represents the red-hot Skelton’s and despite being impressive on her seasonal return at Wetherby, she will appreciate going back up in distance and may rate the main danger.

The first Grade 1 contest of the National Hunt season in Britain, and what a contest we have in store.

A decent field of eight will line up on unseasonably good ground which is a concern for Royale Pagaille backers.

It may not be ideal for Bristol De Mai either, who seeks to emulate Kauto Star with a fourth win in the race. We know how much he likes the Merseyside mud but he did win the 2018 version on good ground so it won’t inconvenience him too much, but he is rising 11 and younger legs may catch him out.

A PLUS TARD is the obvious one. Stepped up to three miles last season, he won the Savills Chase at Leopardstown before finishing a fine second in the Cheltenham Gold Cup, dispelling any stamina fears. He is a class act; a bona fide top-class horse and he is going to take a world of beating here. I couldn’t envisage any of the other horses getting so close in the Gold Cup, and he is only seven, so could have more to come still.

Waiting Patiently is talented and will be a threat if his new trainer has ironed out any issues that have plagued him previously, while Next Destination is a strong stayer who will have his supporters but may get done for a bit of pace on this better ground. If there is to be a shock, it may be Imperial Aura for Kim Bailey. He lost his confidence after unshipping David Bass at Kempton in January and never jumped well at Cheltenham in the Ryanair Chase where he broke a blood vessel. He has had a wind operation over the summer and the trainer believes a step up to three miles could bring about more improvement and that entitles him to be a big contender. 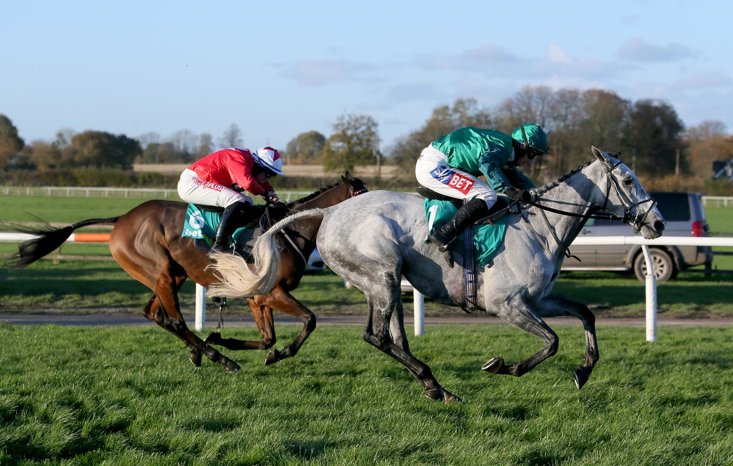 A cracking two mile handicap chase where Before Midnight and Sky Pirate do battle once again.

Sky Pirate is 8lbs better off for the six-length defeat at Cheltenham last month where Before Midnight was very well backed. It was clearly the plan to catch him fresh but he was so good there, I think he still has every chance of upholding the form here on worse terms.

Sky Pirate was second in this race in 2019 off 27lb lower. He climbed the rankings last season, ending with Festival glory and he is borderline Grade 1 class off this mark, but may find it beyond him to still give over a stone to the consistent and improving Before Midnight.

Amoola Gold is a course specialist who has course figures of 121 and got up in the dying strides off a ferocious pace here last month, just beating Monsieur Lecoq by a head. He needs to improve again off a career high mark and may find a couple better handicapped despite coming from the in-form stable of Dan Skelton. The runner-up that day is 1lb better off but may need softer ground to be seen at his best.

I’ll take a chance on DIEGO DU CHARMIL who makes his first start over fences since second in this race in 2019. He has dropped 6lb since then and Lorcan Williams claims an extra 3lb off his back. He has won at the track too so he has conditions in his favour, is well treated and should come on for his reappearance when well held in the Welsh Champion Hurdle.

Over the same course and distance as the Betfair Chase comes the lucky last at Haydock.

Strictlyadancer will be all the rage after two wins at Cheltenham and racing off a lightweight here, but they were tough contests he won and is up another 7lbs so at around 6/4, he is passed over.

Ramses De Teillee enjoys Haydock having previously won here and was a fair fourth in the Grand National Trial in February. He should run his race but has a huge weight of 12-2 to carry.

The pick is EMPIRE STEEL who was pulled up on his last start but that was in Grade 1 company at Aintree. He beat Protektorat by over 40 lengths at Kelso in February although we would be folly to take that form at face value, but he still looks on a fair mark of 140 having only had four chase starts. Ryan Mania said he enjoyed the feel he gave him at Aintree, there was plenty of class there the way he jumped and travelled but he tore a muscle which gives him a valid excuse for that run. He would like to think he could make up into a National horse in time.