Football
News
Whatever the worldwide consensus right now, this might be Scotland’s time
Kris Voakes
08:35, 01 Jun 2022

On Wednesday, the Ukraine men’s national football team are back in competitive action amid the ongoing backdrop of bloodshed in their country. On the 98th day of the Russian invasion, the Blue and Yellow have the small matter of a World Cup qualifying play-off semi-final to contend with.

But they approach the fixture knowing that the majority of the global sporting audience will be cheering them on in the hope that the success of their flagship team will help to whip up further public support and increase pressure on Russia to withdraw troops from the nation.

Now is probably not the ideal time to be the team facing up to Ukraine, yet Steve Clarke’s Scotland have their own compelling reasons to want to qualify for Sunday’s play-off final against Wales in Cardiff, not least of which is the 24-year drought they have suffered since their last visit to a World Cup finals tournament.

This also feels like a time of hope in Scottish football. With Rangers having reasserted themselves alongside Celtic in the domestic game in recent years, winning the Premiership in 2020-21 after a 10-year wait, the Hoops’ title victory this season coincided with their local rivals’ run to the Europa League final. And while the Gers didn’t leave Seville with the trophy, their over-performance in one of the continent’s major competitions has helped bring the Scottish game back into the wider consciousness.

Despite their early exit at last year’s Euro 2020 finals, there is renewed faith in the Scotland team too. Without being littered with Old Firm inclusions – there are only four Celtic players and none from Rangers in Clarke’s squad for Wednesday’s semi – there remains a level of quality and competitiveness in the current side that hasn’t always been present in years gone by.

Skipper Andy Robertson comes into the game off the back of a third Champions League final appearance in five seasons with Liverpool, midfielder Scott McTominay now holds virtual veteran status at Manchester United having been a regular at Old Trafford for half a decade, and John McGinn has been key to Aston Villa becoming a stable force back in the Premier League over the past three years. 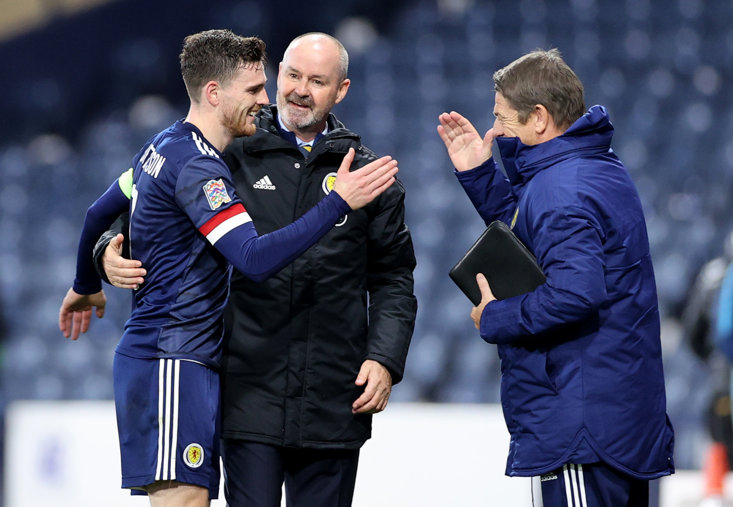 Elsewhere there is a nice mix of experience in a squad which includes no outfield players over 30, suggesting that Clarke’s band of promising international stars could be a threat beyond a potential trip to Qatar this winter.

But to think too much about the future is to overlook just what an opportunity this is for the Scottish national team. Clarke has talked of his side having what it takes to go to multiple tournaments in the future but also emphasised in his pre-match press conference that he would love nothing more than to overcome Ukraine and take his team to Qatar.

Their first chance to prove they have the staying power comes in an unusual kind of spotlight due to the war in Ukraine. But with the current profile of the Scotland squad there appears to be exactly the blend of heart, soul, cunning and flair to deal with not just this huge week ahead but also the group stage challenges that England, USA and Iran would pose in the winter to come.

Whatever the worldwide consensus right now, this might be Scotland’s time.