Mohamed Salah is unquestionably the best player in the world right now. With a hat-trick in the 5-0 drubbing of bitter rivals Manchester United, he once again highlighted how irreplaceable he is for Liverpool. With another world-class display as the Reds step up their chase to regain the Premier League title, after a performance like that, the club will surely have to bow to his demands.

His three goals against United took his tally in the Premier League this season to 10, with the 29-year-old also grabbing the assist for Liverpool’s opener. It also meant that the attacker has scored goals in his last 10 appearances in all competitions. The Egyptian King has been a magical part of Jurgen Klopp’s side over the course of his four-year spell playing for Liverpool, and his role in the plundering of Old Trafford was just the latest chapter in his incredible story.

It once again brings the topic of his contract situation to the surface, with the club currently hesitant to meet his reported £400,000 per week demands. Simply put, Liverpool must pay him what he wants. He has made it clear he would “love to stay” at Anfield until the end of his career, and the club should share that same dream.

It was another clinical performance from Salah, who always found himself in the right spaces to cause havoc for United’s frail defence. For Klopp this was a notable triumph as he became the first manager in Liverpool’s history to go seven league games unbeaten against the Red Devils. The visitors were the team who were first to the second balls, had a clear game plan and, while it wasn’t their best performance, they simply overwhelmed Ole Gunnar Solskjaer’s men. Klopp’s players are once again showing they are good enough to push Pep Guardiola’s Manchester City and Thomas Tuchel’s Chelsea all the way. 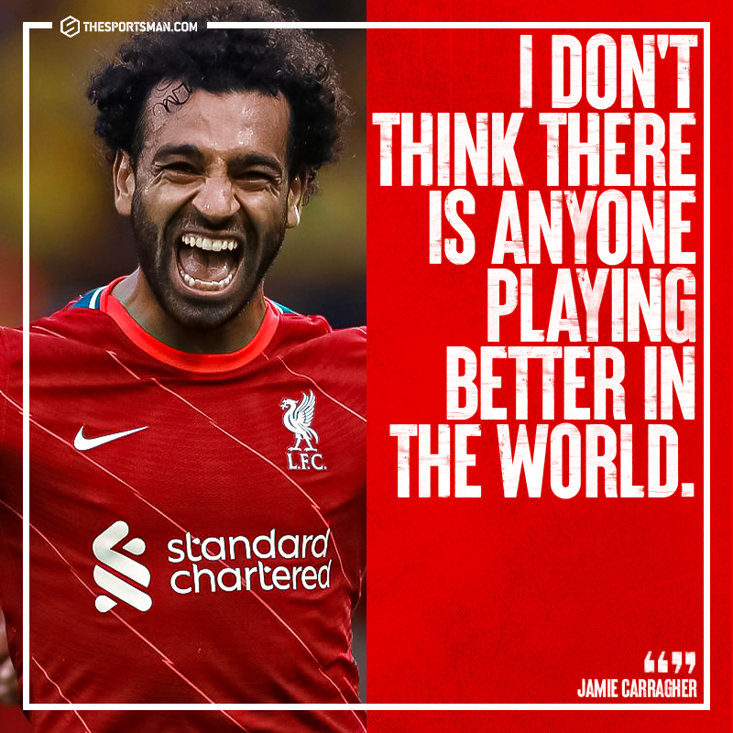 The game itself started brightly, Bruno Fernandes had the first chance as he was played through on the right side, but he skewered his effort wide of the near post. But soon after Naby Keita put the visitors ahead, the midfielder being slipped in by Salah, whose positioning caught out United’s high line of defence, making it far too easy for Liverpool to open the scoring inside the first five minutes. They were two goals ahead before the 15-minute mark as they once again found it too easy to penetrate United’s defence, with Diogo Jota providing the finish.

United tried to rally and did manage to conjure a few half-chances, but the gulf in quality between the two sides was clear as Liverpool always looked the more dangerous in possession. What was costing the home side more than anything was their lack of leadership and organisation at the back, as well as their non-existent press. They effectively presented a training exercise for Klopp’s side, who were not even in their usual rhythm. But they didn’t have to be; they were able to add their third of the afternoon before the break as Salah smashed home a pull-back from Keita. The frustration was clearly getting to Cristiano Ronaldo, who lashed out at Curtis Jones after the whistle had already been blown for a foul, earning himself a yellow card. And it got even worse for them just before the break as Salah registered his second of the game, with Old Trafford growing even more toxic.

The annihilation continued in the opening stages of the second half as Salah completed his hat-trick after he made a darting run to latch onto a sensational pass by Jordan Henderson and coolly dinked the ball past David de Gea for goal number five. Paul Pogba was brought on at the break but received his marching orders after 15 minutes for a dangerous challenge on Keita, with VAR overturning Anthony Taylor’s decision of a yellow card.

VAR had another call to action to chalk off what would have been a consolation goal from Ronaldo at 5-0, and Andy Robertson almost put the ball in his own net from a United set piece but luckily the crossbar came to his rescue.

But all in all this was a dominant derby day to remember for Liverpool supporters in years to come, and another huge victory in the quest for the Premier League title. And for Salah, this was the perfect chance to show just why any club would want him in their side.