Football
News
Sergi Canos comes face-to-face with his former club Liverpool for the first time since departing the club in 2016
Conor Keane
13:32, 25 Sep 2021

When Liverpool take on Brentford in the Premier League this weekend, a lot of eyes will be on the likes of Mohamed Salah, Sadio Mane and Ivan Toney. What a lot of people will have forgotten though, was that Bees’ winger turned wing-back Sergi Canos started his journey in English football at Anfield, and he will be more than ready for his first competitive match against the club that introduced him.

It was back in 2013 when the Spaniard, aged 16, made the brave decision to leave Barcelona’s famous La Masia academy and venture across from the continent to join the Merseyside outfit’s youth setup.

Like all young players who join the academies of the Premier League elite, Canos was hoping to become a player that the fans in the Kop would remember by the time that his career ended. Football, of course, is a funny old game, and his route to the promised land was not as clear cut as you might expect for a young talent that came through Barca’s prestigious academy.

His first taste of senior football in England came during a loan spell with his current employers back in 2015-16. He had a rather productive and educational time down in west London and managed to break into the starting lineup for the Bees once Dean Smith took charge in December. Canos had to make sure that this loan move was productive because it was a crucial time in his career to prove the key figures at Liverpool, including Jurgen Klopp, that he could break into the Reds’ team once he returned from his loan.

After exciting his temporary employers, his loan was extended until the end of the season, which seemed to add a much-needed sense of stability for the youngster and it had a positive impact on his performances. In 39 appearances for the Bees, the Liverpool loanee managed to find the back of the net on seven occasions, including Brentford’s Goal of the Season against Reading, which was like a piece of artwork. His first touch from a Ryan Woods long ball was flicked over his oncoming defender before touching the ball behind the next Royals player in his way, and then he pulled the trigger on his effort which flew like a rocket into the far corner.

As his first spell with the Bees came to an end, Klopp had clearly been impressed by Canos’ efforts in the Championship and he included him in his final Premier League squad of the season for the game away at West Bromwich Albion. The winger was brought on from the bench at The Hawthorns and you sensed that Canos was going to be part of the Liverpool squad the following season – that, unfortunately, was not the case.

He was sold to relegated club Norwich City in the summer and the player really struggled to break into the Canaries side. He played an underwhelming six games for the Norfolk club before being reunited with familiar faces and surroundings in west London as he joined Brentford in January 2017, this time on a permanent basis. 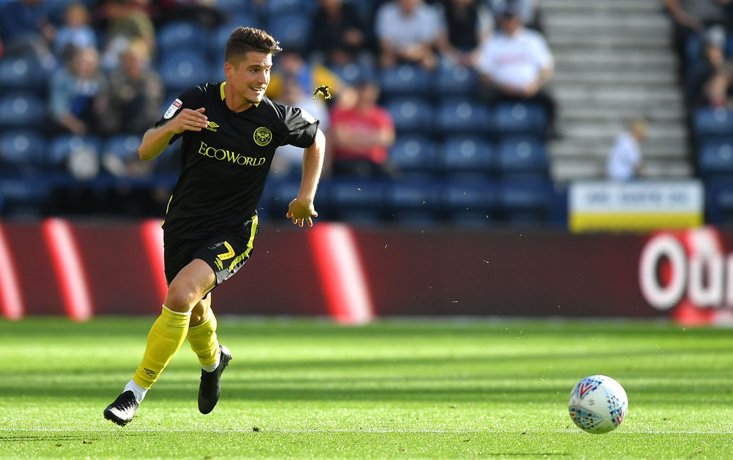 Sometimes that is just how it works for some footballers, they need to be surrounded by the right players, coaches and even be played in the right system for them to showcase the ability that was seen in them from such a young age. For Canos, this was the case and his return to Griffin Park was a match made in heaven for him and the club and you could see he was starting to love playing the beautiful game again.

After a disappointing first full season back with the Bees, Canos only managed to conjure up three goals in all competitions. He was backed by Smith which restored some confidence in the player and when the manager departed for Aston Villa, his successor and current boss Thomas Frank showed him the same love and appreciation which spurred the dazzling player to finish the campaign with nine goals to his name.

The 2019-20 season was a bleak one for the winger as he suffered a serious knee injury in October which curtailed a promising campaign for him where the Bees reached the play-off final. Due to the three-month pause because of Covid-19, he made his return for the final stage of the season, and the defeat to Fulham that denied him his return to the Premier League only drove him to work harder.

The club made no mistake in booking their place in the top-flight the following season and Canos again contributed nine goals to his side which helped guide them to the Championship play-offs once again. On the 29th May at Wembley Stadium, Canos’ journey back to football’s most prestigious league was completed as they defeated Swansea City 2-0 in the final.

Knowing that the demands of the Premier League, Canos knew he would have to work harder than ever to make sure he was one of the first names on Frank’s team sheet. He has so far been involved in all of the Bees’ starting lineups in the top-flight, filling the right wing-back position which he has so far excelled in. His wonderful first-half strike at home to Arsenal on the opening night of the season was Brentford’s first ever Premier League goal and for a player who has been a part of their meteoric rise in recent years, no one deserved it more than him.

Now he comes back to face the club who pried him away from Spain and who did not give him much of a chance to flourish. Canos will be fired up to get one over on his former club and he could provide Klopp and the Liverpool supporters a haunting reminder of the potential mistake they made showing the young prospect the door five years ago.