Manchester City handed a depleted Leeds United their biggest ever defeat in the Premier League with a thumping 7-0 win at the Etihad. It was a marker in the sand for Pep Guardiola’s side, who not only boosted their goal difference, but put the pressure on their title rivals by extending their lead at the top of the table to four points.

This mammoth scoreline did not flatter the Citizens, who tore through Marcelo Bielsa’s injury-hit side time and time again, and set a record for Guardiola in the Premier League. City were dominant from the first whistle against a Leeds side that was without the likes of Patrick Bamford and Kalvin Phillips, among others.

These seven goals came after Bernardo Silva recorded the miss of the season when he skied one from close range, while Phil Foden also had a goal ruled out, after he got his name on the scoresheet in the opening ten minutes.

Some good work from Rodri meant that Illan Meslier was out of his goal and when the ball fell to Foden on the edge of the area, he found the net, with Stuart Dallas unable to keep the ball out on the line. With that opener, Pep Guardiola became the quickest manager to reach 500 Premier League goals, beating Jurgen Klopp’s record of 234 matches by 27 games. Not bad at all, but the manager’s smile was only set to widen as the night went on.

Riyad Mahrez whipped a ball in and despite the lack of striker on the pitch, Jack Grealish scored an uncharacteristic bullet header past Meslier in the Leeds goal. If Liverpool and Chelsea were hoping for a slip up tonight from the league leaders, they would have been disappointed early on. It was Grealish’s first headed goal in the Premier League but City’s dominance was metronomic.

The third came just after the half hour as Kevin De Bruyne finished smartly from close range after more excellent work from Rodri. The holding midfielder has come into his own this season and now finally looks to have taken on the mantle from Fernandinho, who was such a good servant for the Citizens and would even be afforded a run out tonight.

Half-time was the only respite for Bielsa’s men, who didn’t even look in the same stratosphere as their illustrious hosts. Ilkay Gundogan came on at half-time while Daniel James was removed by his manager, but despite the changes, the game followed the same script. 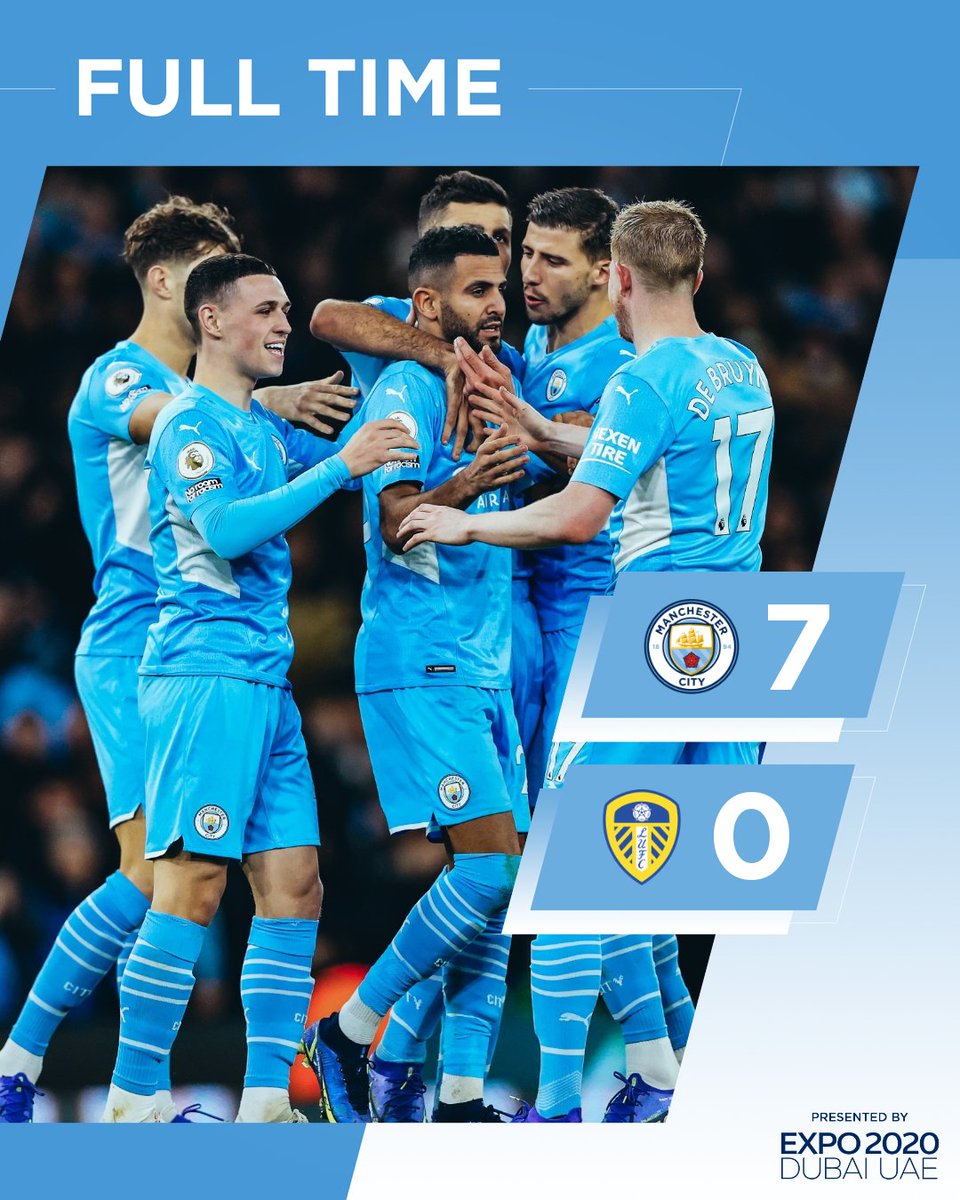 It was 4-0 soon after the break as Gundogan fed Riyad Mahrez who fired in via a deflection from Junior Firpo and the German should have made it five as he guided a wonderful pass wide on the volley. Foden then saw his second of the night chalked off for offside moments before KDB thundered home his second of the night after a poor kick from the Leeds goalkeeper.

Even John Stones got in on the act in the second half after Meslier stopped Aymeric Laporte’s header and then Stones’ shot on goal, but eventually the England defender thumped the ball into the roof of the net. The thing about this City side is that they simply do not let their foot off the gas. This title race could come down to goal difference and Guardiola’s side were adding to theirs as even substitute Nathan Ake got on the scoresheet with a strong header.

The Leeds fans kept on singing until the final whistle, but their worries must now turn to a relegation battle. Their goal difference has taken a hammering and now they are just five points above Burnley, who boast two games in hand on them. Meanwhile, City go marching on. It is usually at this time of the year where they extend their lead at the top and go on a title charge, and in this mood, they are simply the best team in England.