Football
News
After an ill-advised bid for Marko Arnautovic, you'd be forgiven for thinking United choose their targets at random
Joey Mills
14:07, 10 Aug 2022

Take a piece of paper and write down the names of any striker you can think of. Don’t bother with Erling Haaland, Robert Lewandowski or any of the modern greats. Go deeper. Go further back. Go random. Scored 11 goals for Stoke City five years ago? Get him on the list. One of Chelsea’s multiple forward flops? Write him down. Flattered to deceive in a relegated side but scores the odd viral social media wonder-strike? You know what to do. Now cut those names out and affix them to a dartboard. Throw a dart at the board. Congratulations: you are now Manchester United’s football director.

Facetious? Perhaps. But surely a random stab in the dark is the only way Manchester United could have unearthed some of their recent transfer targets. A bid for Marko Arnautovic inspired enough eyerolls to keep an optometrist in work for a lifetime.

33 years old, scored 11 goals in his absolute best Premier League seasons and currently the best player in a below-average Bologna side. Even if rivals Manchester City and Liverpool had not added Haaland and Darwin Nunez respectively this summer, it would feel like an insult to be linked with such a player. Even putting aside Arnautovic’s past racism allegations, purely from an on-pitch perspective this move reeked of desperation.

The Red Devils fanbase let the club know this in their droves. United’s initial bid was rejected and there won’t be another, reportedly due to the number of complaints the club received over the move. United are in a period of considerable fan unrest. #EmptyOldTrafford has been trending recently due to an anti-Glazer drive and more protests are planned. Curtailing a transfer deemed unsatisfactory has emboldened the revolutionary corps of the Old Trafford faithful.

Odion Ighalo’s signing on-loan from Shanghai Shenhua in 2020 was supposed to be a sticking plaster, a short-term fix for a long-term problem. But United seem to be exclusively swimming in these waters now. You have to go back as far as Romelu Lukaku’s 2017 signing to find the last time the club signed a striker with more years ahead of them than they had behind. Some transfers have worked, briefly. Zlatan Ibrahimovic was a success in his only full season, Edinson Cavani’s first campaign was worthwhile. I’ll let you be the judge of Cristiano Ronaldo. 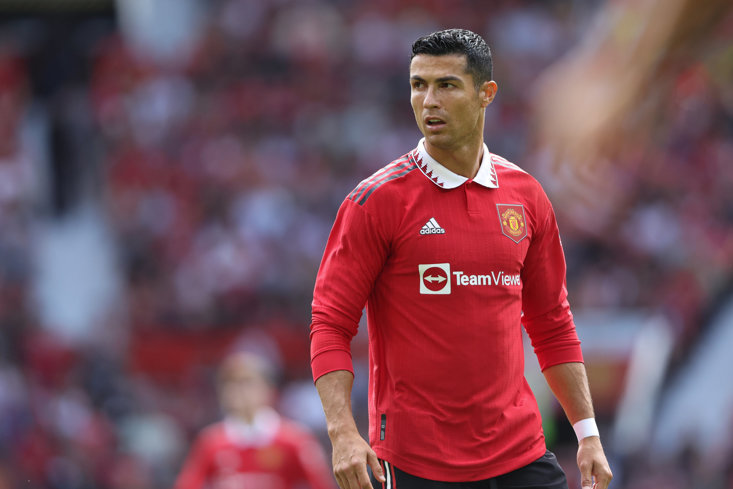 That particular player is the cause of a lot of United’s problems at this point. Whatever you think of his impact on tactics and the progress of those around him, Ronaldo is undoubtedly at the heart of United’s striker problems. His decision to only begin agitating for a transfer when the likes of Lewandowski and Nunez had their futures sealed meant the club had no hope of adequately replacing him. He is also an issue when it comes to signing reinforcements.

One of the reasons football director John Murtough has been shopping in the bargain bin for a forward is because of the profile of striker needed. With Ronaldo looking set to remain at the club, United aren’t looking for a first-choice forward. The Portugal international will expect to play every game and, when he doesn’t, he can become disruptive. This means any incoming striker will be asked to play a limited back-up role. Already you are eliminating a vast number of potential incomings when that is your remit.

That is why Arnautovic was considered. That is why former Chelsea flop Alvaro Morata, now of Atletico Madrid, is an option. Ismaila Sarr of Watford is also under consideration according to sources. Since a forward-thinking move for Red Bull Salzburg’s Benjamin Sesko evaporated, with the striker instead going to sister club RB Leipzig, United have been forced into desperation.

The only candidate that makes sense is PSV Eindhoven’s Cody Gakpo. The 23-year-old is a Netherlands international and won Dutch Player of the Year last season. He also netted 21 goals in 47 games. The Sportsman has spoken before about how manager Erik ten Hag’s strategy of predominantly signing players he knows from the Eredivisie exposes a lack of nous in the United recruitment department. Since then, baffling pursuits for the likes of Arnautovic and troublesome Juventus midfielder Adrien Rabiot have further exposed those failings. On this occasion, returning to what Ten Hag knows would actually be the smart play.

“Manchester United” and “smart” are not phrases you expect to occupy the same sentence when it comes to transfer dealings. The Red Devils were left behind long ago by the canny recruitment of their rivals. They won’t make up that ground this summer. But if they wish to stop the rot, they need to stop trying to fix a declining team with declining players.