Slovakia got off to a flying start at Euro 2020 by dealing an early blow to perennial tournament flops Poland. A Wojciech Szczęsny own goal and an exquisite strike from defender Milan Škriniar were enough for the group’s underdogs to win 2-1 in St Petersburg, showing Group E rivals Spain and Sweden that they are not there just to make up the numbers.

While Poland came out of the blocks the quickest in the first half, Slovakia soon got a foothold in the game and dictated in midfield. Poland’s Grzegorz Krychowiak, Mateusz Klich and Karol Linnety could not get near their Slovakian counterparts Juraj Kucka and Jakub Hromada, who had complete control of the engine-room battle.

The key to Slovakia causing Poland problems was their lack of a focal point in a traditional centre-forward. They had veteran captain Marek Hamšík and Ondrej Duda constantly interchanging, picking up pockets of spaces they could spot to exploit, which resulted in a constant headache for Poland’s centre-halves Jan Bednarek and Kamil Glik. Without a forward to mark and the constant changing of positions in the final third, the pair simply did not know who they were supposed to be picking up. 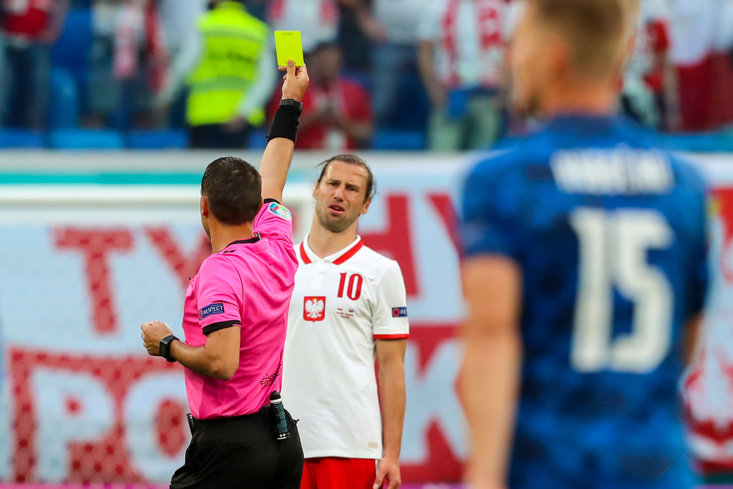 KRYCHOWIAK SAW YELLOW TWICE TO LEAVE HIS SIDE SHORT-HANDED

It was a case of history repeating itself for Poland as their chances of reaching the knockout stages took a massive setback. This was another bad start to a major tournament, and still Robert Lewandowski is not enough to carry a side who are well-known for underwhelming. In what was supposed to be their easiest game of the group they have come away with a defeat and a key figure suspended after Krychowiak's second-half red card. Heading into Saturday's clash with Spain it will take a miracle for Poland to claim that second spot and a huge ask to even battle for progress from third.

From early on, Slovakia showed that they were going to give Poland a headache with their set-pieces. Duda came close for Slovakia when his shot on the spin went narrowly wide of Szczęsny’s near post. They made their pressure count as they opened the scoring when Róbert Mak’s dazzling solo run from the left resulted in a low effort which ricocheted off Szczęsny.

In one of Poland’s better moves, Kamil Jóźwiak drove the ball down the right wing and his drilled cross found its way to Maciej Rybus at the far post but the full-back could not get his shot out quick enough. Slovakia midfielder Kucka tested Szczęsny again with an effort from outside the box that just went over the crossbar.

Poland found a response quickly in the second half, pulling themselves level after 29 seconds. Rybus on the left side of the box pulled the ball across to Linnety, whose first-time effort found the bottom right corner. It was the perfect response to a flat first-half performance. Linnety had a chance to double his tally but his tame effort was comfortably gathered by Martin Dúbravka.

Krychowiak added to a disappointing evening for Poland when he was sent off for a second bookable offence after taking down Jakub Hromada on the break, and it all went from bad to worse when Škriniar’s powered strike sunk Polish hearts but brought pride to the hearts of Slovakians.

After this win at the Krestovsky Stadium, Slovakia will now be hoping to get something from their next game against Sweden on Friday and virtually assure themselves of a spot in the last 16.