Spain ran riot in Seville with a 5-0 thumping of Slovakia to qualify from Group E in style despite an early Alvaro Morata penalty miss. A Martin Dubravka howler gifted Luis Enrique’s men the lead after half an hour, before Aymeric Laporte doubled the advantage moments before the interval.

The sublime Pablo Sarabia added a third 10 minutes after the restart with Ferran Torres making it 4-0 with his first touch of the game. Juraj Kucka’s own goal compounded Slovakia’s misery with the heaviest defeat of the tournament so far ending their chances of qualifying in third place.

The game started as many had predicted, with Slovakia trying to contain a Spanish side intent on operating with their usual fluid football. It was a plan that showed glimpses of working, with Moreno’s effort from a tight angle the only chance of note for Spain in the opening 10 minutes.

However, any hopes of frustrating Luis Enrique’s men for the remaining 80 minutes had seemingly been thwarted when Jakub Hromada’s clumsy foul on Koke saw the VAR award a penalty. La Roja had missed their previous four spot-kicks and Morata stepped up looking to put that unwanted record to bed. Incredibly, the former Chelsea man failed to convert as Dúbravka did superbly to tip the effort around his right post.

Not interested in sulking, Spain continued to press forward and should have taken the lead when Sarabia failed to connect with a Pedri clip. On the 20-minute mark, Pedri himself had an opportunity to break the deadlock but wasted another glorious cross with the goal gaping.

Morata’s stinging effort midway through the first half suggested that his penalty miss hadn’t knocked his confidence, and the entire Spanish side were smiling at the half-hour point as the game’s opening goal went the way of the 2008 and 2012 European champions.

Sarabia pounced on a dreadful Ľubomír Šatka pass across his own defensive line, and the Paris Saint-Germain man fired a powerful effort onto the bar, only for Dúbravka to channel his inner Jordan Pickford and palm the looping ball into his own goal.

It was a horror moment for the Newcastle stopper, who went from hero to zero after his earlier penalty save. 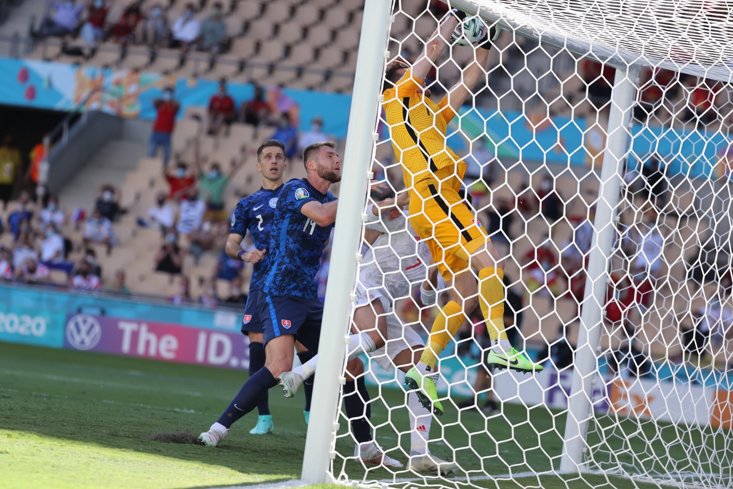 DUBRAVKA'S OWN GOAL OPENED THE FLOODGATES

Any hopes Slovakia may have had of a second-half comeback were extinguished seconds before the half-time whistle as Manchester City’s Aymeric Laporte expertly sent his header back where it had come from to double Spain’s advantage.

Pavel Hapal’s men started brightly after the interval, but were picked apart again within 10 minutes of the restart with Sarabia finding himself unmarked in the area to slot away a Jordi Alba cross.

Morata exited the field to a standing ovation with 25 minutes left to play, perhaps in a bid to lift his spirits after his penalty miss. Strikers are a selfish bread, and his mood will have soured further when his replacement, Man City’s Torres met a Sarabia cross to score with his first touch.

With 20 minutes remaining, the second own goal of the game was scored as Slovakia’s Kucka failed to readjust his feet after a Pau Torres header was initially saved, and he helplessly watched on as the ball trickled over the line to make it 5-0. Incredibly, that was the eighth own goal of Euro 2020, beating the tally from the previous five European Championships combined.

While it is difficult to read too much into this Spain performance against a negative and uninspiring Slovakia, a win of this magnitude heading into the last 16 will give confidence to the three-time winners.

It looked as though Spain were going through as group winners until a last-gasp Sweden winner sent Janne Andersson’s men through in first place. Instead, Luka Modric and Croatia await Spain in the next round after struggling through Group D. Spain will fancy their chances following this trashing, and should they make it through to the quarter-finals, all bets are well and truly off.

Spain are very much alive after netting five in Seville, and at Betfred odds of 15/2, are Pedri and co worth backing?