St Helens opened up a two-point lead at the top of the Betfred Super League with a clinical 22-4 win over local rivals Wigan Warriors in the Good Friday derby at Langtree Park.

Tommy Makinson, Jonny Lomax, Joe Batchelor and Mark Percival all crossed for the three-time reigning champions as they overturned a first-half deficit to register their seventh win in eight games this season.

The early stages were punctuated with missed opportunities, some gilt-edged and others due to close calls in the video box. Jake Bibby’s poor inside pass for Liam Farrell from a break down the left saw Wigan spurn a first-minute chance.

First, Konrad Hurrell took a tackler over with him and seemed to have planted the ball down but Kendall adjudged he had lost possession on the way to the line. Soon after, Joe Batchelor intercepted a John Bateman pass and raced to the sticks only to have the try ruled out for an apparent knock-on into Jai Field taken from a camera shot behind the opposite posts. 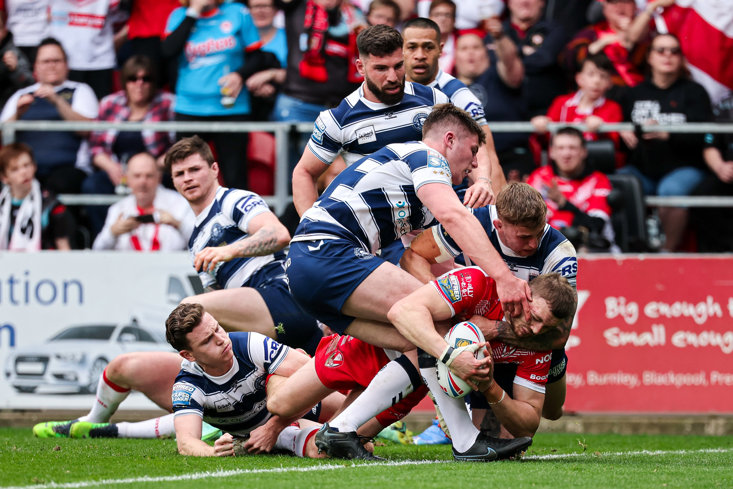 Wigan added insult to injury when Field outstripped the Saints cover to opening the scoring but before long the champions were level as Hurrell fed Tommy Makinson for a flying finish to complete an excellent left-to-right move.

Jonny Lomax gave Saints their first lead six minutes before the interval as Makinson broke clear and fed the supporting half-back, who had a clear run to the line. Makinson’s conversion and a penalty on the stroke of half-time gave them a 12-4 advantage.

Batchelor got over again early in the second half and this time the try was awarded, with Kendall confirming that the back rower got the ball down after the decision had been sent upstairs.

And when Sam Powell saw yellow for a crusher tackle on youngster Jon Bennison, Saints made the extra player count. Bennison was first to reach a Jack Welsby kick, and the winger’s tip inside sent in Mark Percival to put the result beyond doubt at 22-4.

For Matt Peet’s Warriors this was a second defeat of the season following on from their 28-0 reverse to Catalans Dragons in April, while Saints put down a marker ahead of the two teams meeting against in the Betfred Challenge Cup semi-finals at Elland Road on May 7.