“You can knock me over with a feather,” said a stunned Tony Pulis after Serge Gnabry scored four goals in Bayern Munich’s 7-2 hammering of Tottenham in the Champions League on Tuesday night.

The Gnabry, banging them in for fun in Europe’s elite competition for the German champions, is the same Gnabry who was deemed not up to the task of playing for West Brom by manager Pulis less than four years ago.

It’s either a monumental turnaround or the Welsh coach got this one badly wrong. Either way, it’s an astonishing rise.

As Gnabry powered in shots with pin-point precision, Pulis will not have believed his eyes, nervously hoping his blistering display was dampened as he stood in the Sky Sports studio, aware questions would come from behind knowing grins.

Of course, the German has more than proved himself back in his homeland, for Werder Bremen and, now, for Bayern, softening the loss of fellow wing wizards Franck Ribery and Arjen Robben at the Allianz Arena in the summer.

Sky Sports Football
@SkyFootball
"You could knock me over with a feather!" ðŸ˜…
Tony Pulis reveals what it was like working with Serge Gnabry at West Bromwich Albion following the German's stunning four-goal display against Tottenham in the Champions League tonight. ðŸ‘
413
3065

Coming through the ranks at Arsenal, Gnabry was finally going to get his big chance in the Premier League, joining West Brom in 2015.

It was not to be. He made just a 12-minute cameo against Chelsea before playing two League Cup games. Signing on a season-long loan deal, he was back with the Gunners by January.

“Serge has come here to play games but he just hasn't been for me, at the moment, at that level to play the games," Pulis said two months into Gnabry’s time at The Hawthorns.

"As a manager you pick a team that's going to win a game of football. You pick your best team - you don't leave people out because you don't like them, because of this, that and the other."

Football on BT Sport
@btsportfootball
Why did Niklas SÃ¼le do Serge Gnabry like that?! ðŸ˜‚ðŸ˜©
Who kicked his hat-trick ball into the crowd?! ðŸ˜­ðŸ˜­
1255
9482

Fast forward to Tuesday evening and Pulis was pleased for the player, if a little shocked.

"I'm amazed. We could never get him fit. He got taken off in an under-21 game," Pulis told Sky Sports.

"He went back to Arsenal and they sold him on. He was a good kid... didn't mind him at all. He's fulfilled his potential.

"Having worked with him at West Brom and seeing him there to what he's done is just absolutely amazing. When people show what they can really do... really knuckle down and become so good, as he's done, it's absolutely fantastic,” Pulis added.

While things didn’t work out with the Baggies, he has settled in and is shining with the Bavarians.

The butt of his team-mates’ jokes at full-time, he’s clearly well-liked in the dressing room with Nicklas Sule amusingly hacking him down as he raced away from him in celebration while Javi Martinez cruelly booted his hat-trick ball into the crowd.

Not that Gnabry will have cared too much as an ex-Gunner scoring four times on the home turf of Arsenal’s fierce local rivals Tottenham.

He was quick to take to social media following the 7-2 annihilation, declaring proudly: ‘North London is RED!!!”

To add insult to injury for Spurs supporters, Gnabry, in just one night, has scored the same number of goals at Tottenham’s new stadium as Spurs’ star man Harry Kane this season.

He was quick to show off his cooking celebration as he hit the net again and again. 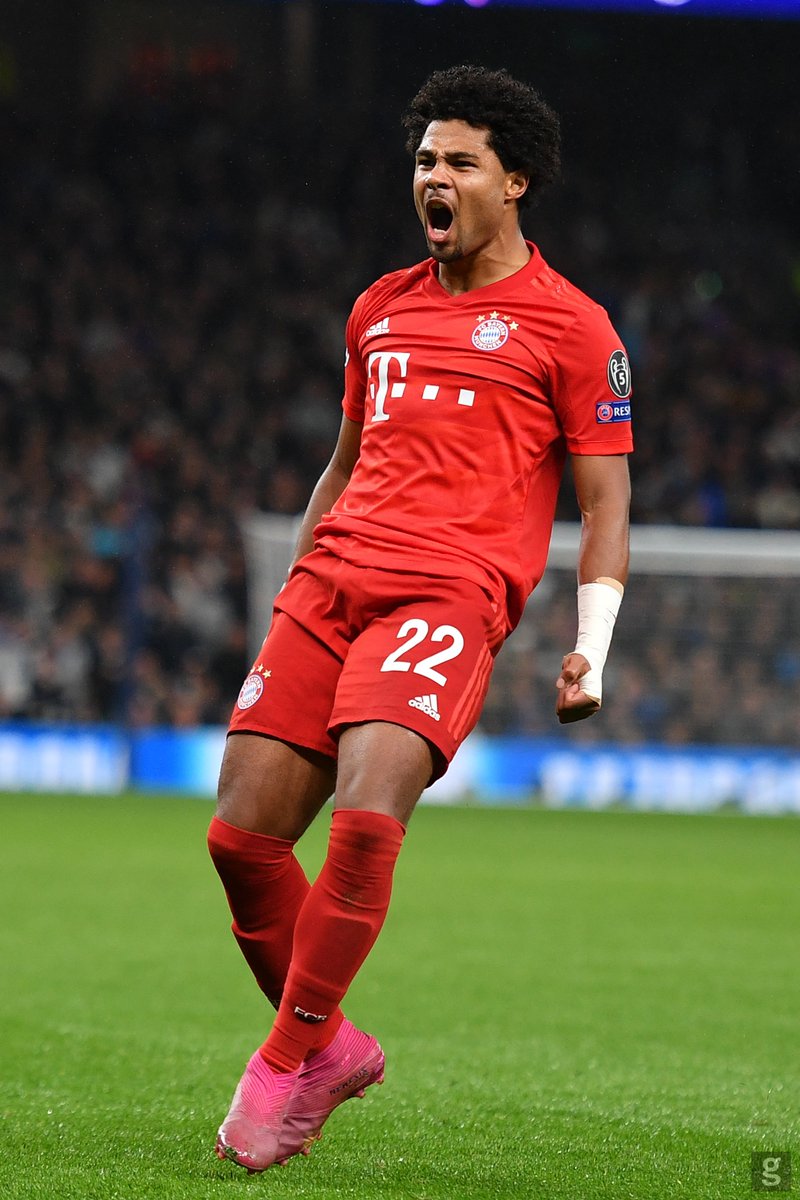 Inspired by NBA star James Harden, the wideman is gaining global attention himself and will soon be just as synonymous with the amusing stirring action.

“There’s a video on YouTube where he’s cooking after dropping, I think, a buzzer-beater and won the game,” Gnabry told fcbayern.tv. “So he was cooking, stirring it up, and that’s the celebration.”

Having cooked up a storm, Gnabry has silenced his doubters once and for all.

More
football
The Book That Shows Why St Pauli Is A Football Club Like No...
Bayern Munich have won the Bundesliga for the past eight seasons. Borussia Dortmund have been champions [ ... ]
football
Everton Seek First Derby Win In A Decade With A Blueprint Belonging...
They say imitation might be the highest form of flattery, though there is absolutely no love lost between [ ... ]
football
Gary Neville Is The Catalyst For Change The Game Needs Right...
A week is a long time in politics, but a week in the politics of football? Well, that’s another [ ... ]
football
It's Time For Man Utd To Drop Harry Maguire... For His Own Good
Harry Maguire trudged off the Wembley turf looking like he had the weight of the world on his shoulders. [ ... ]
football
Get Off Gareth's Back - Southgate Is England's Best Manager...
Only three managers have ever taken England to World Cup semi-finals. Alf Ramsey won the whole shebang [ ... ]
football
Childhood Dreamer To Fantasy Football, Wenger’s New Book Is...
It really is true. You really don’t know what you’ve lost until it’s gone. He was [ ... ]
football
The Game Needs Premier League 2.0 And Rick Parry Is The Man...
The only thing that's certain is that it’s complicated. You’ll have seen the news that [ ... ]
football
The Nations League Injects Life Into The Tired International...
You might not know your Group A4 from your Group D2, and yes, it might on the face of it be the most [ ... ]
football
England's Under-21s Are Falling Short And Eddie Howe Is The...
If you’re anything like us, you will have been sat pulling your hair out at home on Wednesday [ ... ]
football
Why Red-Hot Calvert-Lewin Should Replace Harry Kane As England's...
When James Rodriguez hit a rocket for Colombia against Uruguay at the 2014 World Cup to become a global [ ... ]
football
Men In Blazers, The Podcast That Proves Americans Are Falling...
A firm fixture of the Stateside calendar now,  ‘Soccer’ has been certified as the fifth [ ... ]
football
Solskjaer Was A Stop-Gap, Pochettino To Man Utd Is Five Years...
Jose Mourinho had just been sacked for a second time by Chelsea, while Manchester United were a complete [ ... ]
football
More Than Just A Name, Five Things You Need To Know About Arsenal’s...
Yes, yes, we’ve seen all the posts and the hashtags, so he’s got a great surname. But there’s [ ... ]
football
High-Scoring, But Low Intensity - Is Covid Football A Bit Too...
We had Tottenham beating Manchester United 6-1, Liverpool losing 7-2 at Aston Villa. To some it was [ ... ]
football
The Numbers That Prove The Women’s Super League Is The Best...
“We can say hand on heart we are the best league because we really are. All the best players want [ ... ]
football
Podcast Review - The Glenn Hoddle Footy Show
A quarter of a century since he last kicked a football professionally, and 14 years after his last coaching [ ... ]
football
Book Review - How To Run A Football Club: The Story Of Our National...
With an extended lockdown threatening the existence of a substantial portion of the United Kingdom’s [ ... ]
football
Thiago, Kalvin Phillips And The Premier League ‘Quarterbacks’...
Thanks for reaching out. You do the math. My bad. Americanisms, you gotta love ‘em. We’ve [ ... ]
football
Wayne Barton's Book On David Beckham Highlights Golden Balls'...
When historians look back at the sports scene at the turn of the millennium, there will most certainly [ ... ]
football
Rosé For Rodriguez, A Bollocking For Bilic, Five Stories You...
Managers can’t manage masks, fans are finding new ways to hail their heroes, and Jurgen Klopp [ ... ]
football
The Covid Defying Smart Helmet That Could Help Unite Football...
After the longest season in history, a mercifully short reprieve for players to catch their breath has [ ... ]
football
Get An Edge On Your Rivals This Season With The Fantasy Premier...
What are you this year? ‘Lallanas in Pyjamas’? ‘Murder on Zidane's Floor’? [ ... ]
football
Neymar's Handbags, Shy Guy Jose, And Other Football Stories...
Just like that, we’re back in the room. There’s new rules (on and off the pitch), and renewed [ ... ]
football
Celebrating The Return Of The Premier League With Its Best Ever...
After the shortest pre-season on record, even if it has felt to some of us like the longest ever, Premier [ ... ]
football
Lionel Messi Teams Up With Budweiser To Inspire Tomorrow's Footballing...
Lionel Messi, for all you do, this Bud’s for you. We’ve got to admit, it’s got a certain [ ... ]
football
From 007 to 46 Million Followers, Ten Facts You Never Knew About...
Everton finally announced the signing of James Rodriguez on Monday evening, after the Colombian superstar [ ... ]
football
The New Liverpool Book With A Groundbreaking View Of The Shankly...
September should always hold a special place in the hearts and minds of Liverpool Football Club and [ ... ]
football
The Questions We Want Answering After Watching All Or Nothing:...
“You have to be a bunch of bastards!” Annnd with that, we’re hooked. The last day [ ... ]
football
Football History Comes To Life With The Guardian’s Forgotten...
For much of 2020, the general consensus amongst the sporting community has seemingly been the desire [ ... ]
football
Book Review - Close Quarters: An Extraordinary Season On The...
He has been called the luckiest journalist in the world. When award-winning sportswriter Neil Harman [ ... ]