The dates of the demise of the greatest football sides can vary. To pinpoint exactly the end of a particularly successful era could be due to a managerial departure, the retirement of a key player, financial instability, or the rise of a rival.

This isn’t the case for Torino Football Club.

In the 1940s, Il Toro were one of the best teams in the world. Indeed it is not unusual for football historians and those who witnessed the team in person have placed it highest in the pantheon of superlative-defying Italian sides: Arrigo Sacchi’s great AC Milan of the late 80s and 90s, Giovanni Trappatoni and Marcello Lippi’s respective Juventus incarnations, and Jose Mourinho’s treble-winning Internazionale.

In 1949, Torino had virtually won their fifth consecutive Serie A title. A 0-0 draw with Inter had put them on the brink of another Scudetto.

This Torino side ended when the FIAT G-212 plane carrying 18 of the players back from Lisbon - almost the entire 1948-49 Torino squad - crashed into the Basilica of Superga, atop a hill ten miles outside Turin.

Travelling through a sky enveloped with fog it is generally regarded that pilot Pierluigi Meroni had had to fly low in order to avoid dense clouds that had been affecting his visibility at a higher altitude.

In total, including journalists, coaches, club officials, and the crew, 31 people died instantly.

Torino had travelled to the Portuguese capital for a friendly match against Benfica, in a testimonial for Francisco Ferreira, skipper for As Águias. The game was played in Lisbon on May 3, with the aforementioned league match against Inter being moved accordingly. They had flown immediately from playing the nerazzurri from Malpensa Airport in Milan to Portugal.

Torino were captained by Valentino Mazzola, who had arranged the game in Portugal as a favour for his friend Ferreira. Mazzola and Ferreira had met during a match between Italy and Portugal played in Genoa.

He was and remains the icon of the ‘Grande Torino’. 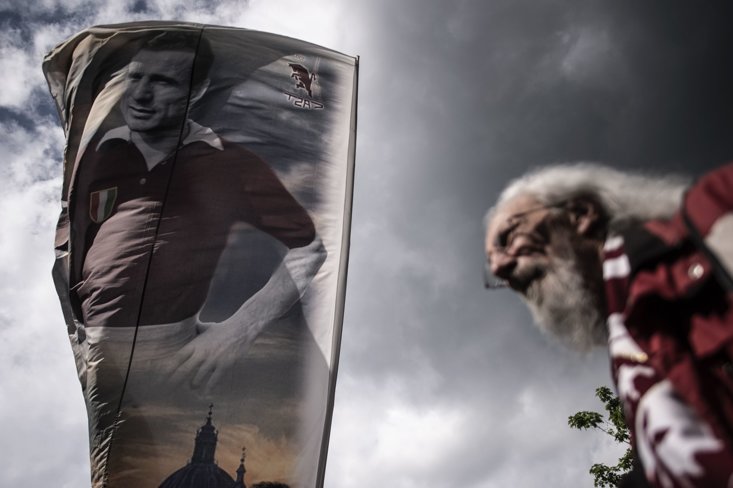 A flag of the captain of Grande Torino, Valentino Mazzola

Mazzola was a former baker’s boy who rose through the tiers of the Italian football system. Born in Cassano d'Adda, Bergamo, in 1919, Mazzola first played football for his village team, then the manufacturer's side of a nearby Alfa Romeo plant.

Participating in a match for the Navy he was noticed and subsequently signed by Venezia F.C, with whom he would win the Coppa Italia in 1941 (still the only time the Venice club has ever hoisted the cup). Torino snatched him out of the grasp of their interested city rivals (and Mazzola’s boyhood club) Juventus by paying Venezia 200,000 Lira and two players in exchange for Mazzola.

“He had this larger than life charisma,” explained Italian football expert Gabriele Marcotti, “He was the superstar. He was the matinee idol.”

Mazzola would lead Torino to five Serie A championships. He was also captain of the Italian national team for two years but, due to the Second World War, played only 12 times for the Azzurri.

In the devastatingly dominant Torino side skippered by Mazzola appeared a peerless ensemble. There was the potent goal scoring abilities of Guglielmo Gabetto - who still remains to this day one of only two players to have won a title with both Torino and Juventus - goalkeeper Valerio Bacigalupo, Aldo Ballarin and Mario Rigamonti in defence, a midfield of Eusebio Castigliano, Ezio Loik and Giuseppe Grezar, and winger Franco Ossola.

All would perish on May 4.

A club formed by breaking away from Juventus in 1906 (as Associazione Calcio Torino - AC Torino), in 1939 they were acquired by Ferruccio Novo, a former Torino player, who used his considerable wealth to make Il Toro a considerable player on the Italian stage. Modelling his project on Herbert Chapman’s Arsenal, Novo espoused the importance of a scouting system, changed the management structure, and, of course, bought some of the best players available. One such would be Valentino Mazzola.

In 1943, Torino won their second ever Scudetto before World War II put the competition on hold for the next two seasons. Torino had gained four successive Scudetti between 1945 and 1949. Including the title won before the league was interrupted by war, the record of winning five top division titles is a stretch only recently bettered by the dominance of Juventus.

Two days after the tragedy in 1949, Torino were once again anointed Serie A champions, through a unanimous vote by the Italian top tier’s teams. For the remaining games of the season, as a mark of respect, the other sides fielded their reserve players. For the following season, the rival teams were asked to provide a player from their roster to the devastated Torino.

Full-back Sauro Tomà was the last surviving member of that exceptional squad, and died aged 92 in 2018.

Tomà was extremely close to Mazzola, standing by his friend and captain when Mazzola controversially divorced his first wife, a move that ostracised the skipper. Tomà avoided that fateful flight through injury.

Two days after the tragedy, over a million people reportedly lined the streets of Turin as the funeral procession made its way through the city. The population of Turin in 1949 had only been recorded at just over 700,000. 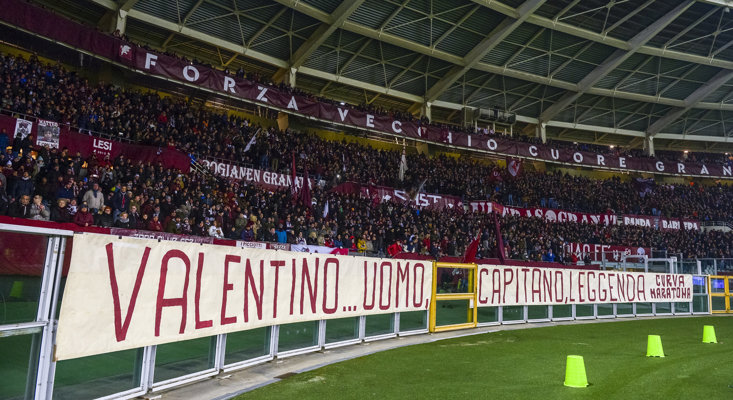 Furthermore, the national football team had great importance as a symbol of a new beginning, a new Italy, in the aftermath of the devastation of the Second World War, helping to expunge the remnants of Mussolini’s reign. And Torino was fundamentally important to that. In fact the national set-up was reliant on Il Toro. In one particular international friendly against Hungary, all except one of the Italian XI were from Torino.

The World Cup, which Italy/ Torino looked increasingly likely to defend (having won the previous two Jules Rimet before the outbreak of World World II), was scheduled for the following year, 1950.

Instead former Italy and Torino manager Vittorio Pozzo - the only coach in history to win the World Cup twice - had the sad duty of climbing the Superga to identify the charred remains of his former players.

Mazzola however lived on through his son, Alessandro, who took on his father’s mantle of bringing positive post-war optimism to Italy. Sandro was a fixture of the great Inter Milan side of the 1960s, with whom as a one-man club he almost equalled his father’s tally, with four Serie A titles  and two European Cups, whilst also being runner up in Ballon d’Or in 1971. Sandro was just six years old when he and the world were robbed of his father

The dynasty has never truly recovered. In the time since Torino achieved only one Scudetto, in the mid-1970s. If anything, this is why the legend and legacy of the Grande Torino lives on.