Football
News
The Battle of Stamford Bridge between Chelsea and Spurs remains a shameful but exhilarating episode
Kris Voakes
10:32, 19 Sep 2021

The first Battle of Stamford Bridge happened in 1066 when the Saxons fought off Viking invaders in the Yorkshire village of that name, killing King Harald of Norway and the King of England’s exiled brother Tostig in what is considered by many to have marked the end of the Viking Age.

The second Battle of Stamford Bridge took place 950 years later, when Tottenham Hotspur arrived at the west London stadium of the same name with the hope of maintaining a title challenge. By the time they left, they’d blown a two-goal lead, been shown nine yellow cards, Leicester City were champions of England for the first time ever and Spurs were destined to finish third in what had been coined a two-horse race.

That 2-2 draw between Chelsea and Spurs will live long in the memory for anybody who watched it, and Mark Clattenburg has a lot to answer for. Even by the time Son Heung-min had slid home to double the visitors’ lead after Harry Kane’s opener, there had been signs of tempers flaring. Jan Vertonghen’s clash with Diego Costa had seen the Spurs defender take a big chunk of the Chelsea man’s shirt. The Spain international had responded with an elbow across the throat and a push with the head. This game wasn’t going to end quietly.

When Danny Rose hurtled into Willian at full force it sparked a melee which featured Tottenham boss Mauricio Pochettino running onto the pitch to attempt to keep the two instigators apart. While the Argentine was being reprimanded, Moussa Dembele’s attempted eye gouge on Costa went unpunished by referee Clattenburg. 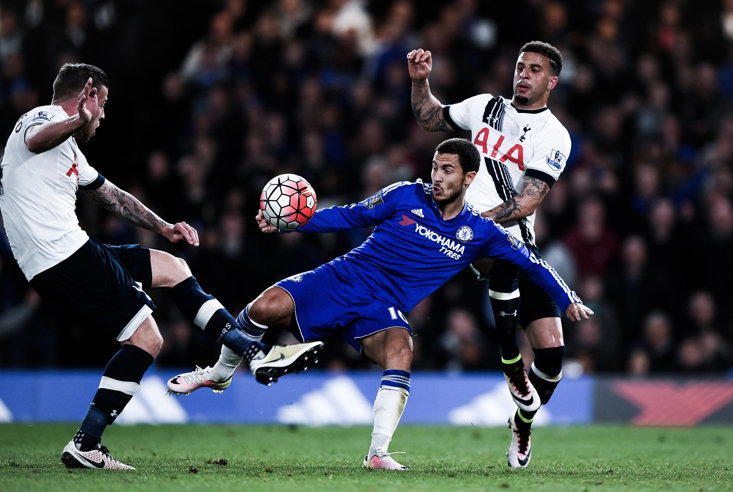 HAZARD CAME IN FOR SOME ROUGH TREATMENT

Early in the second half Gary Cahill pulled a goal back for Chelsea, but for those not invested in the Premier League title race the score was becoming of less interest than the card count, with Spurs already having received four to Chelsea’s one at this stage and Erik Lamela having been fortunate not to have been shown a red for a two-footed tackle on Cesc Fabregas. The Chelsea midfielder would also later claim he had had his hand stamped on by the Argentine in back play.

With seven minutes to go Eden Hazard collected a pass from Costa and struck a delightful shot into the far top corner beyond Hugo Lloris. It was a goal celebrated more in Leicester than anywhere else, with the Foxes needing only for the score to remain the same to achieve a first ever title win. But there was far, far more drama to follow as Spurs lost their heads.

An appallingly late challenge by Eric Dier on Hazard led to a sixth Spurs yellow, Kane racked up number seven when diving in on Willian and when Dembele booted the loose ball straight at the prone Brazilian’s face, he finally found his way into the book too. A horrific two-footed dive by Dier straight into Fabregas was somehow overlooked by Clattenburg, and within seconds Ryan Mason was hacking down the counter-attacking Hazard to make it nine bookings.

To top it all off, the final whistle was met with a shoving match at the mouth of the tunnel, with Rose and Costa going toe-to-toe and Spurs sub goalkeeper Michel Vorm becoming particularly incensed before things finally calmed down.

The man who had failed to take control of the proceedings was Clattenburg. While emotions were always likely to be running high given what was at stake for Spurs, many considered that the level to which Pochettino’s side lost their heads partly came down to the official’s refusal to put a foot down earlier.

It was not by accident that things were allowed to escalate, as it turned out.

“It was theatre. I went in with a game plan, that I didn’t want Tottenham Hotspur blaming Mark Clattenburg that they were going to lose the title. It should have been three red cards to Tottenham, but I allowed them to self-destruct so all the media, all the people in the world went: ‘Tottenham lost the title,’” he told the Men in Blazers podcast in 2017.

“If I sent three players off from Tottenham, what are the headlines? ‘Clattenburg cost Tottenham the title.’ And it was pure theatre that Tottenham self-destructed against Chelsea and Leicester won the title. 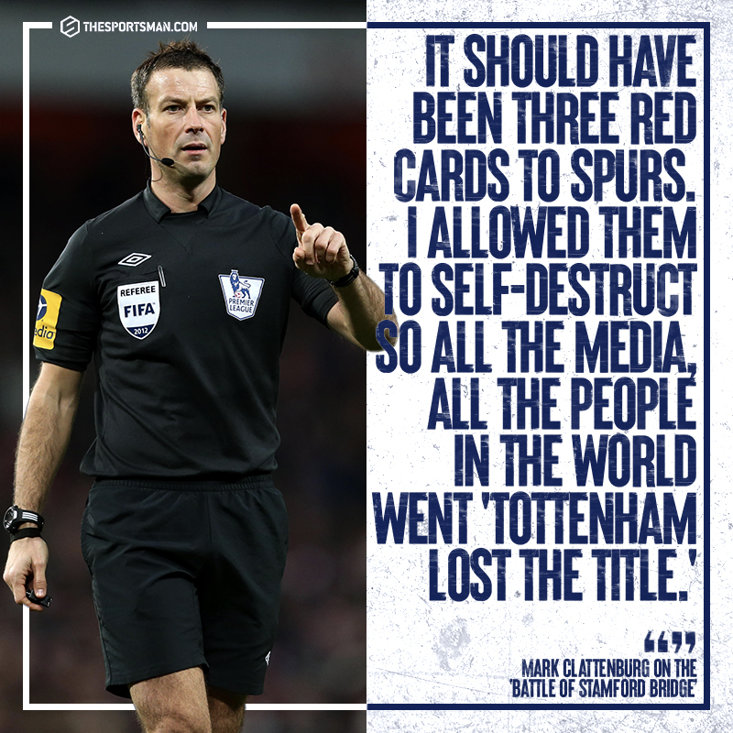 “When Hazard scored to make it 2-2, I’ve never felt an atmosphere in a stadium before like that, because Chelsea had stopped one of the enemies winning the title. I helped the game. I certainly benefited the game by my style of refereeing.

“Some referees would have played by the book; Tottenham would have been down to seven or eight players and probably lost and Tottenham would’ve been looking for an excuse. But I didn’t give them an excuse, because my game plan was: Let them lose the title.

“I think we’re all part of the theatre… we’ve all got a duty to make sure the game is enhanced.”

Clattenburg, thankfully, doesn’t referee in England anymore. In 2017 he went off to head up the referee’s panel in Saudi Arabia and later officiated in China. No longer are Premier League games given the status of unofficial karate practice with little regard for which star players get potentially serious injuries in the process.

That night in May 2016 remains one of the most exhilarating but also shameful passages in Premier League history, and its one redeeming feature was the story that came out of Leicester as a result.

When the two teams meet again on Sunday, with no Clattenburg in the middle, the ‘battle’ should be all metaphorical.