Whether anti-Solskjaer, anti-Woodward, anti-Glazer or all of the above, Manchester United fans appeared to be agreed on one thing on Wednesday night: the 2-0 home defeat to Burnley at Old Trafford was a worrying new low for their club in the battle to return to the top of English football.

Supporters were pouring out of the Theatre of Dreams long before full-time as the reality of the long haul still ahead of United truly set in. Goals from Chris Wood and Jay Rodriguez sparked inquests, recriminations and fury on the terraces, in TV studios and across social media with the country’s biggest football club facing an extensive overhaul.

But beyond the basics there appears to be deep division when it comes to identifying the key figures behind the decline.

From the stands there were chants in favour of manager Ole Gunnar Solskjaer paired with songs decrying the impact of the club-owning Glazer family as well as executive vice-chair Ed Woodward, who the Glazers appointed in 2013. While noises coming from the club on Thursday morning suggest there will be no quick decision on Solskjaer, the atmosphere around United is becoming nothing short of toxic.

Away from Old Trafford itself, Solskjaer is facing increased criticism over the team’s record since his appointment in December 2018. While United currently sit in fifth in the Premier League table, they are six points adrift of Chelsea in fourth and only four points ahead of 14th-placed Newcastle. And they have recorded just 11 wins against 12 losses since the Norwegian was given the job on a permanent basis in March 2019. This is also their worst start to a season since 1989-90, intensifying calls for the former United striker to be sacked.

"There are loads of thoughts through my mind," Solskjaer told the BBC after Wednesday’s chastening defeat. "Now, one of disappointment. We hold our hands up.

“The players are giving everything, they have done absolutely fantastic so far this season but they know it wasn't good enough tonight. The boys looked mentally tired towards the end, we didn't find that creativity.”

But for many United fans, that is simply not good enough. They believe standards have slipped, with mediocrity accepted. Only last weekend, Solskjaer was praising his side for their performance in a 2-0 loss at Liverpool, while his claims earlier in the month that Manchester City’s decision to field a strong side in a League Cup semi-final was some sign of progress were met with astonishment. 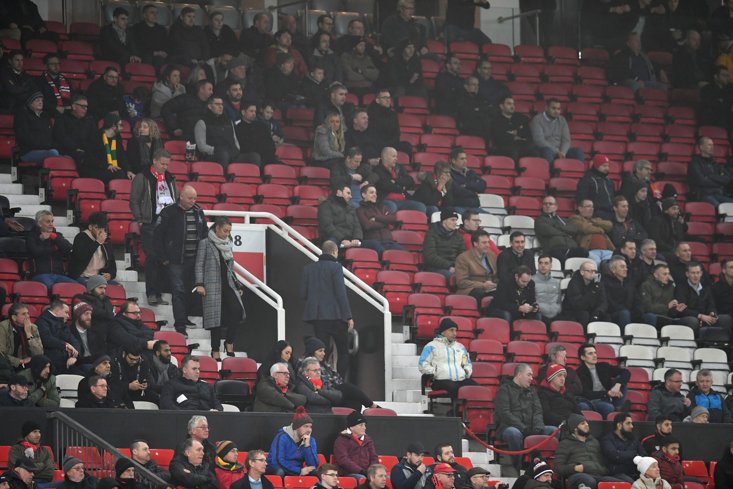 United supporters flooding out of Old Trafford before full-time

The decision to continue with Solskjaer while former Tottenham boss Mauricio Pochettino remains on the open market has mystified swathes of the United support. That said, there appears to be little belief that those in power would give the Argentine the right support even if they chose to bring him to Old Trafford.

While the early years of the American owners’ reign following their arrival in 2005 saw continued success under Sir Alex Ferguson, their decision-making has drawn constant criticism amid claims of self-interest.

The family’s takeover saddled the club with a debt which still sat at £384.5 million as of September 30, 2019, and former investment banker Woodward was a key architect in their initial purchase. For many fans, his appointment in place of well-liked CEO David Gill was a reflection of the move towards more financially-led decisions in the boardroom.

Woodward has overseen the short managerial reigns of David Moyes, Louis van Gaal and Jose Mourinho before giving Solskjaer the permanent role in March 2019 after a promising spell in caretaker charge. The bouncing about from project to project has been identified by some as a clear lack of vision, while the decision to hand the job to a former club great on the strength of success with Norwegian minnows Molde and a failed spell in charge of Cardiff City has been questioned far and wide.

“At Manchester United, Ed Woodward was installed as CEO – somebody with zero understanding of football who was previously an investment banker,” Van Gaal famously told 11 Freunde. “It cannot be a good thing when a club is run solely from a commercially-driven perspective.”

Woodward told investors in November: “Our ultimate goal is to win trophies playing fast, fluid attacking football, with a team that fuses graduates from our Academy along with world-class acquisitions. We know this will not be achieved overnight, however, we've made investments across the club that we believe will set us on the right path.”

utdreport
@utdreport
SolskjÃ¦r: "We took the decision that some of these players were let go because we needed to start afresh, with a clear target in front of us. That means a certain type of player in the squad. Yes, we know that means we have to get quality in, and numbers in." #mulive [mu]
72
681

But a total investment of £840 million since Ferguson retired and Woodward simultaneously replaced Gill has reaped little to no reward. Whether ill-judged signings or a failure to bring on board the right kind of addition, United have struggled to back their managers in the right way and have been on a seemingly never-ending hunt for a technical director to oversee transfer policy for over a year now. The current first-team squad is widely accepted to be an incredibly poor return for such a huge outlay.

"The recruitment, what has been bought?” asked former United defender Rio Ferdinand on BT Sport after the Burnley loss. “There's nothing down there that suggests to me it's laying down the foundations for the future.

"I'm sitting up here, if I'm honest, I'm embarrassed. It's embarrassing to be here, the way that the team is. Not just how the team performed but what's coming next. I don't see a pathway. I don't see targets being set. I don't see it.

“Put today's result to one side, I'm talking recruitment and building the squad. Money has been spent willy-nilly for the last seven years. What's to show for it here? I don't see what's there. You can't defend this."

The situation right now has many mystified as to what the next step should be. With three defeats in their four Premier League games of 2020 so far, United are in a serious mess.

And while it is accepted that sacking Solskjaer would be the quickest means of change, nobody appears under any illusion that that alone would fix the rifts developing at Old Trafford given the way the club has been run over a significant period.

The chaos, for the time being, continues.