Monday might be one of the most difficult days of Gareth Southgate’s career. With England among the favourites to go far at Euro 2020 this summer, the Three Lions boss will be whittling his 33-player squad down to the final 26 ahead of Tuesday’s announcement.

How he goes about informing those who are going to miss out will be almost as important as the identities of the unlucky seven, with management of personalities often key to the atmosphere around a national camp.

Glenn Hoddle knows that more than most. He received criticism following his decision to call in his players one-by-one on 31 May 1998 during a pre-World Cup training camp in La Manga in which he had to make his final call on a 22-man squad from the 28. Southgate was one of those hoping to head to the tournament in France, and while the defender was among those to be given the nod, the mercurial Paul Gascoigne was one of the unfortunate six.

“I gave him so many opportunities to get himself fit,” Hoddle later explained to ITV’s Football Mavericks of Gazza. “Six or seven months before I’d said ‘Look, you’ve got to be fitter, this is another chance, this may be your last World Cup’. But you could see he was never fit.”

When Gazza was the stretchered off in a warm-up game against Morocco, Hoddle’s mind was made up.

“It was the saddest thing I’ve ever had to do, leaving Paul Gascoigne out, and that was purely because he wasn’t fit and he wouldn’t have been fit for the tournament.”

So when Gazza arrived at Hoddle’s hotel room in La Manga hoping to received good news, he was stunned to be told that his stunning performances at Italia 90 would turn out to be his first and last experience of a World Cup. His response was to fly into a rage.

“I thought about trying to talk to him but knew I couldn't, not while he was in this state,” Hoddle wrote in his memoir ‘Glenn Hoddle: My 1998 World Cup Story'. “He would never take it in. He had snapped. He was ranting, swearing and slurring his words. He was acting like a man possessed. 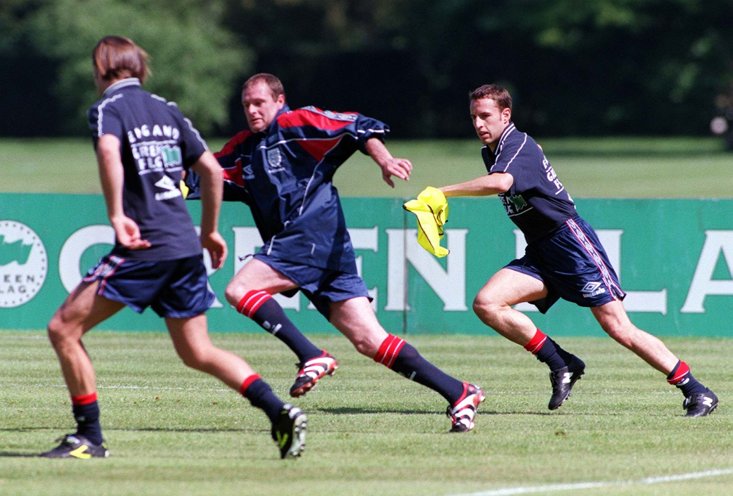 The then-England boss went on to claim that when he appeared to have got the situation under control Gazza kicked out at a chair with his bare foot.

“He was a different person now,” added Hoddle. “He had snapped. I stood there and he turned as if to go again, then came back with a barrage of abuse.”

Paul Merson witnessed the aftermath as the next player due in to be told of his fate.

“We had to go upstairs to talk to Glenn. Everyone was sitting around the pool,” he told the Sky Sports Football Show.

“I remember riding after Gazza, I didn’t know if I would go. When I went there, Glenn was white, it looked like he had seen a ghost. The hotel room was broken in pieces, there were chairs everywhere, lights everywhere.”

It was an ignominious end to a fantastic international career. Hoddle has toned down his version of events that day 23 years ago – even claiming in 2020 that the press had exaggerated what was nothing more than a fist through the door – but the episode which led to Gascoigne never playing for England again is now the stuff of legend.

There aren’t many Gazza-esque characters in Southgate’s current squad, but sensibilities need to be managed well all the same. We’re unlikely to hear of smashed up rooms and rageful responses, but that doesn’t mean the England manager will be having any less difficult a time in delivering the news today.

In 24 hours we will know his final 26. For the other seven, the sense of disappointment will be palpable.