It’s the end of an era. Carli Lloyd has made her last appearance on the international stage in what has been an exceptional career.

Last night was her swansong appearance for the United States as they ran wild against South Korea (her Korea finale, if you will) in a friendly that they won 6-0. Fittingly, the crowd at Allianz Field in St. Paul, Minnesota gave her a perfect and most deserving of send-offs.

Lloyd leaves the international game as a legend and a household name. In front of a home crowd, she was able to say goodbye to her fans, and they could reciprocate – a young child was seen holding a sign that read “Thank you Carli.”

In the 65th minute the crowd were brought to their feet, applauding and cheering as the attacker was taken off. Teammates and coaches swarmed her with hugs and adoration as she left the field.

At the end of the game, she addressed more than 18,000 fans in attendance after being shown a highlight reel of her time in football. “Minnesota, you could not have given me a better atmosphere for one last game,” she said. “Thank you to everybody who came out. This is an unbelievable stadium, fantastic team performance tonight. I was really happy that we ended on a win, so thank you to my teammates.”

She leaves behind a decorated career that includes two FIFA Women’s World Cups, two CONCACAF Women’s Championships, four SheBelieves Cups and two Olympic Gold medals. Since making her US debut against Ukraine in 2005, Lloyd has earned an incredible 315 caps, making her the second-most capped footballer of all time. In those 315 appearances, she was a lethal component of a potent attacking force which led to her racking up 134 goals – the third highest in the history of the women’s team. And some of them were significant.

She was the match-winner in the finals of both the Beijing 2008 and London 2012 Olympic Games. Lloyd also became the first American to score in four different Olympics and her 10-goal total, capped off in Tokyo this summer with a brace in the 4-3 victory over Australia, set a new record among US players. Her golden touch in front of goal also inspired the US to World Cup glory in 2015 and 2019. The 2015 final included a 16-minute hat-trick with Lloyd becoming the first woman to score three in a World Cup final, the second player ever to achieve this after Sir Geoff Hurst in 1966.

The versatile attacker is viewed globally as one of the leading faces of soccer in the US. The veteran legend will leave behind a lasting impact that will stand for years to come across the Atlantic and further afield, as the final curtain has fallen on her illustrious career. Her coach Vlatko Andonovski has expressed his admiration for the cult figure, saying her level of excellence showed “age is just a number.”

“I’ve said this before, if she was a male soccer player in Europe, we would have statues of Carli Lloyd all over. Streets would be named after her. Stadiums. That’s how big she is,” he said.

That is how much of a star Lloyd has been in the women’s game, and at 39 years old, she has had a career that even Cristiano Ronaldo would be proud of. Lloyd’s 22 years as a professional were down to her spirit and determination as well as her sensational skills with a ball at her feet. 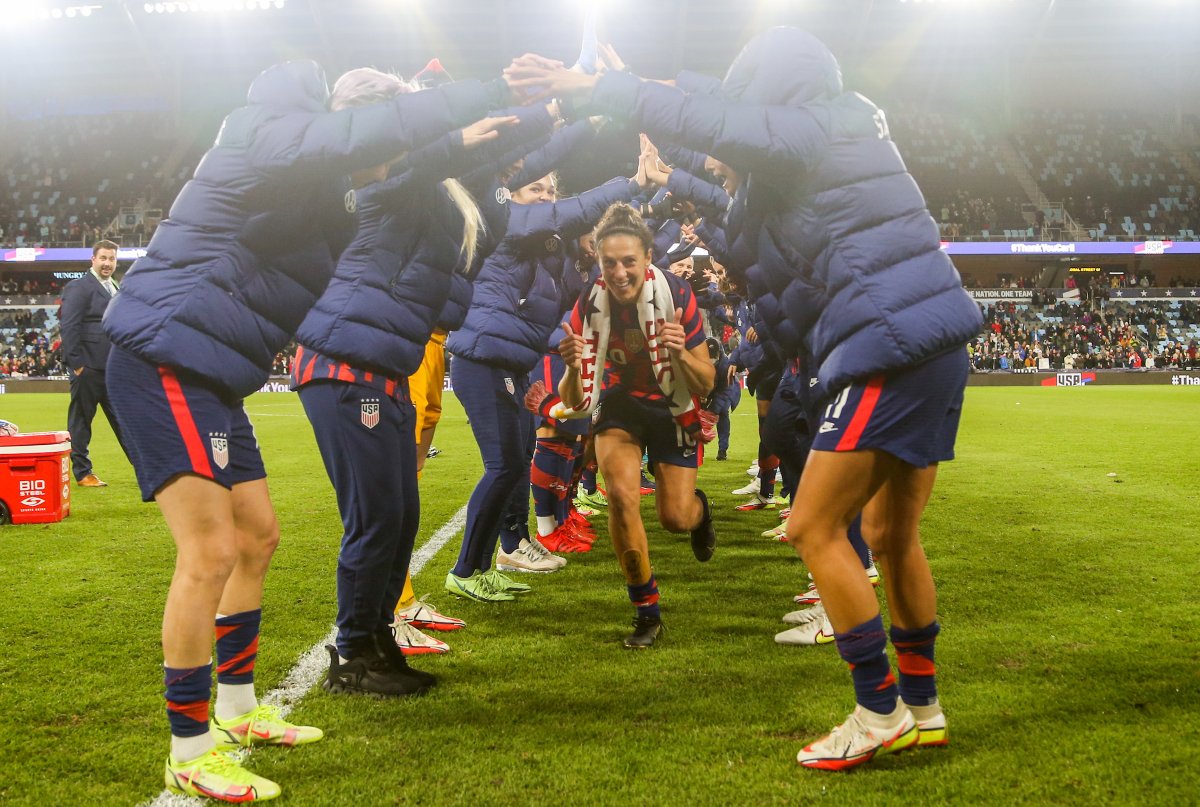 She was criticised early on as a professional for being inconsistent and getting dispossessed too easily, but this just sparked a fire within her to improve. It drove her to become one of the best attacking players in the world who could do everything. Combined with her tactical awareness, she became a manager’s dream for being able to effectively play across several different positions.

The US legend had branded the 1999 FIFA Women’s World Cup as her inspiration, having attended the opening game. She said in an interview with FIFA: “I remember the women playing, the fans – everybody was so excited. It was a remarkable moment and I said to myself then that it would be amazing to be able to play for my country. Little did I know that my dream would come true.”

For now, her life on the pitch continues as her NJ/NY Gotham FC side bid for a play-off run in the National Women’s Soccer League.