Now we have reached the business end of this team. We have put together a solid back four and a well-balanced midfield, but now it is up to the forwards to bang in the goals. They are the most valuable players on any team and can often be the difference between a side winning the league or not, and all the glory falls upon their shoulders.

We have three spots to fill up top and the first name, our number nine, has to be Alan Shearer. 260 goals, the most in Premier League history is a huge achievement, worthy alone of making it into this side, but he also became a legend for his boyhood club. Winning the Premier League with Blackburn Rovers was a huge moment in English football, but he will be remembered for representing Newcastle United for a decade, scoring 148 goals.

Although this may seem like a simple decision, there was a huge amount of debate in the Sportsman offices on who should occupy this number nine spot. Didier Drogba was unplayable for Chelsea and scored so many crucial goals in their quest for major trophies. Nine cup final goals in 10 appearances won Chelsea the Champions League while he was also integral to Jose Mourinho’s team that dominated English football.

Eric Cantona is still one of the most influential players of the Premier League era and for those of a certain generation at Old Trafford, simply cannot be touched. He joined Manchester United from Leeds United in one of the greatest transfer swindles of all time, as Sir Alex Ferguson managed to steal him away for just £1m, while keeping hold of the player Leeds had initially enquired about - Denis Irwin. 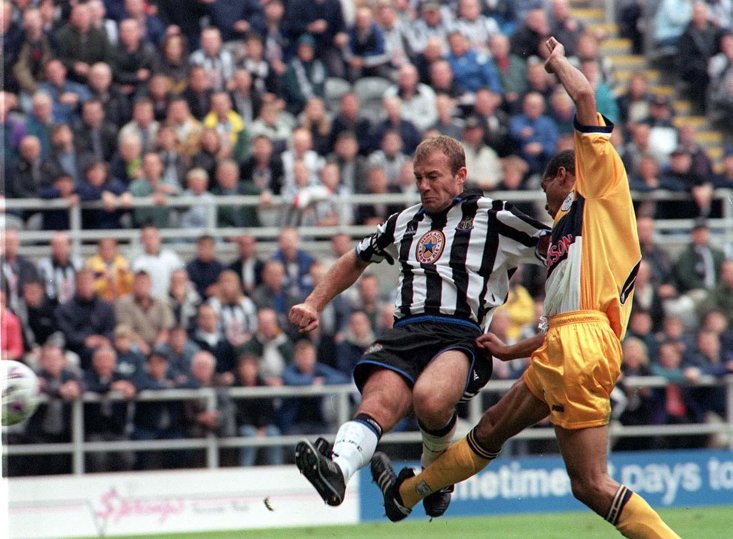 Other influential forwards such as Dennis Bergkamp, wowed up with their spectacular skill set. His goal against Newcastle United goes down as one of the greatest we have ever witnessed in the top flight of English football and his partnership with Thierry Henry was truly beautiful to watch.

Meanwhile, the likes of Jamie Vardy from the modern era are certainly worth consideration. What he has done since rising up to the Premier League with Leicester has been nothing short of sensational - culminating in that title-winning season in 2016. He has scored 124 goals in 252 matches for Leicester, broken the record for the most consecutive Premier League games scored in and goes down as a great.

But he’s not quite on the same level as Alan Shearer. Nobody is - and for that reason, he wheels away with his right arm aloft, into our greatest XI.