This article first appeared in The Sportsman on 30/04/19

On April 30, 1994, Liverpool fans would gather together and stand on their beloved Kop for the last time as the Reds faced Norwich City in what was to be the final ever game to be held in front of the famous old Anfield terrace.

The original Kop was built in 1906 after Liverpool won their second league title and the club directors built a new brick and cinder banking at the Walton Breck Road end of the ground to cope with the extra demand. And soon enough the new mound was christened the Spion Kop in memory of the many men from the city who died at a hill of the same name during the Boer War in South Africa.

In the years that followed the Kop would become famous throughout the world as it regularly housed almost 30,000 raucous Reds who quickly gained a reputation for their famous wit and repartee when it came to serenading their heroes, while also viciously mocking visiting opponents.

But with the implementation of the Taylor Report, which was published following the tragic events at Hillsborough in April 1989 which led to the deaths of 96 Liverpool fans, the Kop’s days were numbered and at the end of the 1993/94 season the bulldozers would finally be brought in to make way for a new, all-seated, structure.

The club pulled out all the stops to mark the occasion as former managers and players were paraded in front of the packed terrace, which was a mass of flags, scarves and banners from down the decades, prior to the final game while Gerry Marsden took to the field for one last rendition of the Kops’ favourite anthem, “You’ll Never Walk Alone.”

One of those who had taken a flag was Barry Ellison. “I think it was from the 1977 European Cup final,” he tells The Sportsman. “It had a big plastic pole and I put it down my top and pants to sneak it into the Kop. When I got to the turnstile it popped out my top, the policeman saw it, looked at me and said: ‘Go on son you've got this far, go in with it.’"

But for all the official formalities that day, Saturday April 30th 1994, was as much about the fans who had made the Kop their home for the last century or so; each with their own personal memories and special moments; often viewed from the same spot week-after-week.

“My Ian Rush number 9 shirt was still wet from being washed so I used my Ma’s hairdryer to finish the job,” explains John Lawless. “I got in close to maximise the heat and such was the quality of the kits back then it started to melt and a patch about the size of my palm was gone.”

Meanwhile David Clinton recalls the sheer emotion of the day. “I remember getting in early and being one of the last to leave. There were grown men crying all round me like they had just lost a member of the family.” 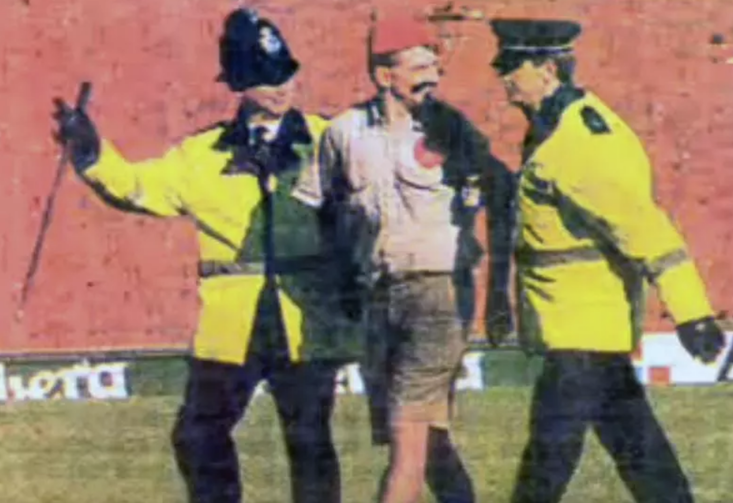 John Garner Being Marched To The Anfield Road End

“After bouncing for hours to 'We All Live in a Red and White Kop,' it was time to go home,” remembers Martin Harris. “I noticed this dandelion growing in between the steps and pulled it out along with some rubble and took it home. It's planted in my folks’ back garden with bits of the Kop surrounding it and mum is under strict orders to never stick it in the garden waste!”

But perhaps the only people who hadn’t read the script that day were the Norwich City players who did their best to ruin the party thanks to an impressive performance against a Liverpool side who were maybe overcome by the sense of occasion; however, as the final whistle blew the defeat was far from the minds of the Kopites whose thoughts quickly turned back to the enormity of that momentous day. “I remember when we were losing we started to sing ‘You’re supposed to let us win,’ says John Griffiths. “Brilliant day. Sad, but brilliant.”

The Canaries might have won the game thanks to a strike from Jeremy Goss; but even though the midfielder was rightly credited with scoring the final goal at the famous Kop end, the honour of being the last ever person to bang the ball into the net in front of the world famous terrace actually belongs to a lifetime Red who was on the Kop that day.

Long-time Liverpool fan John Garner - dressed as a Spion Kop war veteran complete with fez, handlebar moustache, knee-length shorts and khaki army shirt - saw an opportunity to write his name into Liverpool folklore once and for all after the game.

“Everyone refused to leave the Kop on the final whistle,” he told The Sportsman. “We wanted to stay there as long as possible but once it became obvious that the players weren’t coming out again I noticed a ball had been left in the net at our end which one of the stewards had thrown to some kids near where I was standing.”

Seizing his chance Garner jumped over the barrier at the front of the terrace and ran with the ball to the centre circle to the delight of a still packed Kop, before turning and noticing a once in a lifetime opportunity.

“I ran towards the goal at the Kop end and as I reached the edge of the box curled the ball into the corner, which wasn’t easy when you’re wearing a pair of hobnail army boots. But before I could jump back into the Kop I was grabbed by two of Merseyside’s finest police officers and marched to the Anfield Road end.

“Thankfully they saw the funny side of it and I was just told not to do it again and have a good night. I met up with the lads not long after and without it really sinking in what I’d done someone pointed out that I’d just scored the last goal in front of the Kop.’”

Long after the final whistle, when the massed hordes had finally moved on, a couple of Kop regulars still found themselves milling around the ground, reluctant to leave. One of them was Chris Tyrell, a home and away Red since 1982. “When the final whistle went it was the noise I'd been dreading all season,” he says. “It felt like the end of the world, I remember tears rolling down my face, we hung round the ground for hours, all stood there looking absolutely devastated and 24 years on I still am.”

Another was Dickie Felton, who found himself alone at a deserted Anfield, just with his thoughts for company. “I walked back around to Walton Breck Road and amazingly the door at the Kop was open so I just walked in. The Ground was empty and I guess I was trespassing, but I just stood on the old mound and soaked up the atmosphere of an empty ground – just the barriers, the steps and the sound of silence.”