For the second time in less than a fortnight, Olympique Lyonnais and Paris Saint-Germain faced off in a major cup final. Whilst PSG's men's team completed the domestic quadruple of silverware on July 31 by claiming the Coupe de la Ligue over Lyon via penalties, it was Les Parisiens' turn to suffer from the spot kick as the two clubs met again in the Coupe de France Féminin final on August 9, 2020. For Lyon it was simply a case of don’t get the boys to do a woman’s job as Olympique Féminin once again proved why they are the best female club football team on the planet, and are most likely the greatest female side of all time.

Capturing their 30th major trophy, they are the most successful club in the history of Division 1 Féminine with fifteen league titles as Olympique Lyonnais (plus four league titles as FC Lyon), and the Coupe de France, sealed 4-3 on penalties, became the latest in a stream of overflowing silverware that has made Lyon the premier force in female football.

It isn’t all Vive la France though, keep the red, white, and blue face-paint on; for Les Lyonnaises benefit from a strong contingent of Lionesses: currently four stellar English women are part of the Lyon fabric.

Lucy Bronze, Alex Greenwood, and Nikita Parris are the Three Musketeers who currently vie for a spot in this Lyon side, with the experienced D’Artagnan in Jodie Taylor agreeing at the beginning of August to become part of the squad and complete the Fab Four Francophiles who have now journeyed over from England to play in the Auvergne-Rhône-Alpes.

The club is simply the Holy Grail for an aspiring female footballer, where the best player in the world, Ada Hederberg, stars alongside recognisable French faces from the recent World Cup in Eugénie Le Sommer, Amandine Henry, and skipper Wendie Renard. 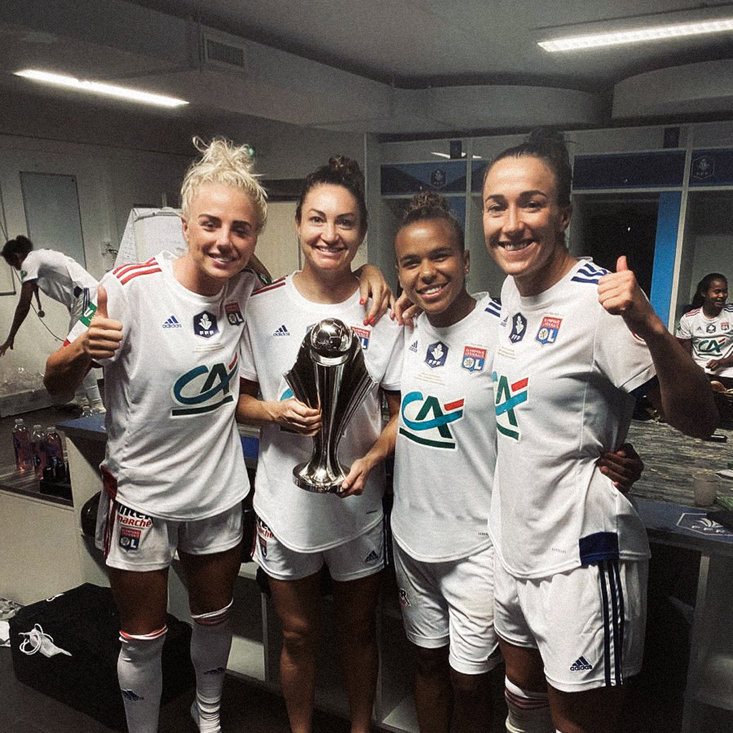 In the same tournament - in France - Bronze (who, FYI, has the middle name ‘Tough’) bagged the Silver Ball for her simply exceptional performances that helped ride England to the semi-finals. By the year’s end she was beaten by only the sublime Sam Kerr to the Guardian’s Best Player in the World accolade, and Megan Rapinoe to the Ballon d’Or. However, both Bronze and compatriot Greenwood will both be out of contract at Lyon at the end of August, the latter having been at the club for a year. Prepare to erect those ‘Welcome to Manchester’ billboards back up again; as a former Red Devil, Greenwood is mooted to make the move to City upon conclusion of the Champions League this season.

Mercifully however, Parris in Lyon is a headline poor newspaper publishers will still be able to push for the foreseeable future. Nikita Parris is heading into her sophomore season with OL, with the 2019 Football Writers’ Association Women’s Player of the Year making the move from Manchester City last year, becoming one of Lyon’s three top-goalscorers in the recent, once-again successful Division 1 Féminine campaign. Her follow-up season will be buoyed by her fellow forward, speaking a common language. Former Arsenal striker Taylor had been playing in the United States with the Seattle Reign, but with a recent taken over by Lyon's parent company OL Groupe, a move to France was on the cards, the ‘opportunity to play for one of the best teams in the world,’ an opportunity, the player herself said she ‘couldn’t refuse.’

There might be a Channel between the two countries, but for fans of Lions and Lionesses, it might be best to channel your interest into this sleek England-infused operation of Olympique Lyonnais Féminin - they’ve arguably done more to provide for the women’s game than any other side on the planet.