Welcome to The Situation, our weekly look at the latest from the summer transfer window’s biggest deals. With transfers seeming to take longer than ever, mired in a tangled web of personal terms, add-ons and release clauses, The Sportsman aims to get to the heart of the issue and inform you of exactly what stage a deal is at.

Football’s least wanted man spent another week doing more in the newspapers than he did on the Carrington training pitch. The football world ground to a halt when the 37-year-old arrived at the training ground for what were being termed “crunch talks”. ‘CR7’ was flanked by his agent, Jorge Mendes, and Sir Alex Ferguson was also at Carrington.

The presence of the former manager was apparently due to an unrelated board meeting, but it the timing is certainly noteworthy. Particularly so due to the Scotsman’s crucial role in the signing of Ronaldo from Juventus last summer.

Meanwhile, Atletico Madrid fans made their thoughts on Ronaldo potentially joining their club perfectly clear. Not only did their supporters group release a statement saying Ronaldo “represents the antithesis of our values of generosity and humility", but they also protested in person. A banner emblazoned with “CR7 Not Welcome” was unfurled during a friendly this week.

The endless press speculation about his future seems to be getting to the five-time Ballon d’Or winner. In response to a post on Instagram, Ronaldo said the following; “Impossible not to talk about me one day. Otherwise the press makes no money. You know that if you don’t lie you can’t get people’s attention. Keep going that one day you got some news right.”

Another week, another bumper Barcelona transfer they can somehow afford while being allegedly €1 billion in debt. The Blaugrana have beat Chelsea to the signature of the defender, having agreed a €50 million deal with Sevilla.

Chelsea thought they had their man last week, having their own bid of £55 million accepted. But once again, just as they were in the pursuit of Raphinha, the west Londoners have been trumped by Barcelona.

Joan Laporta continues to pull economic levers left, right and centre, essentially mortgaging the club’s future to try and ensure contemporary success. The long-term impact of this financial brinkmanship remains to be seen, but in the short term it has netted them Kounde, Raphinha, superstar forward Robert Lewandowski, Frank Kessi and Andreas Christensen. The issue now is making room within the allowed wage expenditure of La Liga to actually register this glittering array of talent. Which brings us on nicely to our next player. 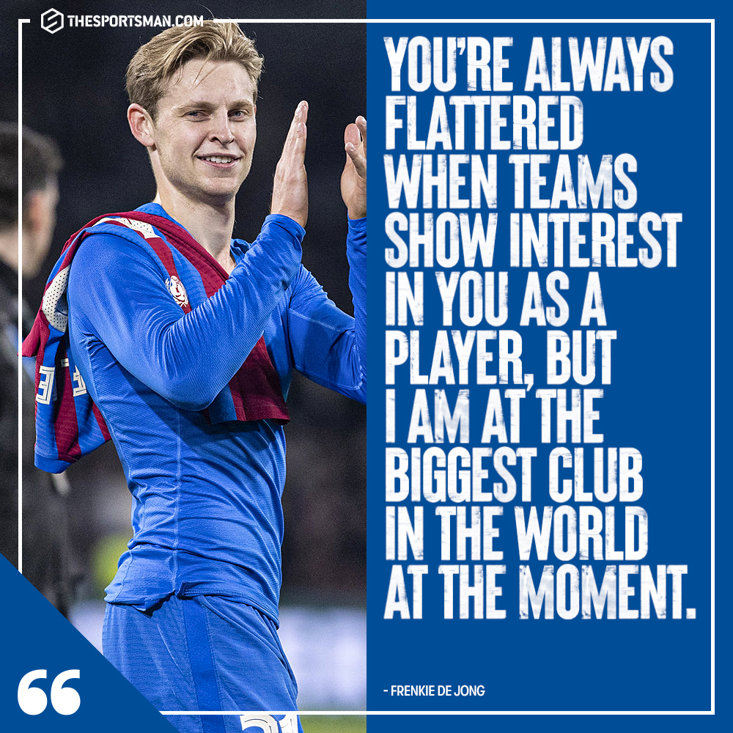 Manchester United’s other frustrating saga is no closer to a resolution than Ronaldo’s future. The sticking point remains the €17 million in deferred wages that Barcelona owe their former Ajax midfielder. The club are keen to sell De Jong in order to register some of their summer buys, but the player is determined to stay put until he is given what he’s owed.

Mundo Deportivo reports that Barca manager Xavi has told De Jong his game time will be limited. Much was made of the fact the United target featured in central defence during pre-season but, in truth, it is a role he has been asked to play on a handful of occasions in the past.

While the matter seems to have reached an impasse, there is over a month of the transfer window left to run. Expect this one to continue for a little while yet, as United appear in no rush to work on alternative midfield targets.

RB Salzburg wonderkid Benjamin Sesko is reportedly subject to increased interest from Manchester United this week. The striker was being hotly-pursued by Newcastle, and the Magpies reportedly still hold out hope. But United football director John Murtough has held talks with the player’s representatives as the club pursue attacking improvements in case Ronaldo leaves.

Salzburg are reluctant to sell the 19-year-old and reportedly are seeking to keep him for another year before moving him on next summer. The Austrian champions have long worked within such a model, becoming a decorated talent house that develops young talent and then sells them to European giants. Erling Haaland, a player Sesko has been compared to, is the most famous example of this transfer strategy.

Talks for Sesko appear to be at an early stage, and Newcastle are certainly not out of the race at this point. With Salzburg reaping £68 million in fees already this summer from the sales of the likes of Karim Adeyemi and Brenden Aaronsen, they can afford to make the Premier League pair sweat.