Rugby League
News
You can watch Featherstone take on Batley and Widnes face Whitehaven for free on The Sportsman
Elliott Bretland
12:25, 22 Mar 2021

The Sportsman is delighted to announce that we will be bringing you not one, but two Betfred Challenge Cup second round ties with the West Yorkshire derby between Featherstone Rovers’ and Batley Bulldogs, the first ever Challenge Cup winners in 1892, shown exclusively, live and free on our website, YouTube and Facebook channels at 12.45pm on Saturday, March 27. We’ll then bring you Widnes Vikings’ clash with Whitehaven on Sunday, March 28 which kicks off at 5pm.

On Friday, we brought you exclusive first round action as York City Knights defeated Sheffield Eagles 30-6 in a frenetic opening encounter at the Keepmoat Stadium and are sure the entertainment will be just as brilliant in the next phase of the competition. And we will continue to bring you live rugby league games as well as excellent coverage.

Kris Voakes of The Sportsman said: “This is a huge opportunity for the Sportsman. Not only will we be showing live Betfred Challenge Cup games but we’ll also have features and we hope to showcase Rugby League to a wider audience.” 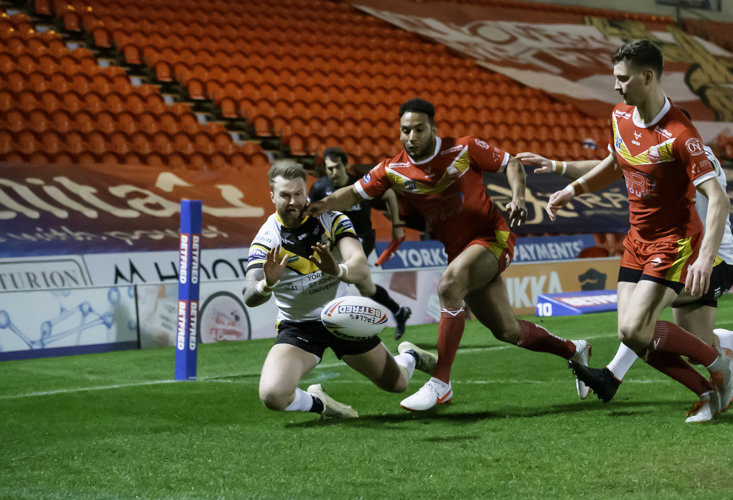 Featherstone progressed from the first round with a 41-16 win over Bradford Bulls while Batley made it through by beating Halifax Panthers 19-6. Widnes Vikings, meanwhile, knocked out Gavin Henson’s West Wales Riders to set up a tie with Whitehaven who defeated the Dewsbury Rams.

The eight teams in the Second Draw will battle for a place in the Third Round of the Betfred Challenge Cup where they will be joined by the 12 Betfred Super League clubs.

Mark Foster, the RFL’s Chief Commercial Officer, said: “After such a successful First Round weekend, which marked the first competitive action for more than a year for the 16 clubs involved, we’re delighted to have secured coverage of all four Second Round ties.

“To have two ties broadcast live by the BBC for the second consecutive round is another significant boost for the profile of the Betfred Challenge Cup and the clubs outside the Super League, as the focus sharpens on which four clubs will earn places in the Third Round when the network coverage begins.

“The BBC coverage of Gavin Henson’s Rugby League debut for West Wales Raiders, followed by the heavyweight battle between Featherstone and Bradford, helped to generate unprecedented interest in the First Round weekend.

“We were also delighted by the reaction to the first live streaming by TheSportsman.com for the Sheffield-York tie on Friday night, and it’s great that they will be able to double that commitment in the Second Round by showing the other two ties.

“With the Our League platform allowing us to stream the other five First Round ties, and all the fixtures in the early rounds of the Betfred Championship starting with seven matches over the Easter weekend, we have also been able to allow clubs to recoup some of the significant costs of staging matches behind closed doors – either by offering greater value to their season ticket holders, or by introducing Earlybird rates and day or weekend passes to watch matches.

“The revenue generated for all matches so far has comfortably exceeded production costs, and we are hopeful that more fans at all levels will join our growing Our League membership, which is now more than 170,000, to watch the quality Rugby League available in Betfred Championship, League 1 and the Challenge Cup.”

Click here for more of our Rugby League coverage.