Neil Etheridge will be one of the main reasons Cardiff City stay up, if Neil Warnock can work his magic and produce an escape over the final three games. The Bluebirds would be long gone if it hadn’t been for their Filipino goalkeeper who has made a record three penalty saves this season, kept eight clean sheets and made 120 saves, the second most in the division.

It would be quite easy to pack this team with Wolves players after their remarkable season since promotion to the Premier League but we have kept it sensible. One man who certainly deserves his place is right wing-back Matt Doherty who has been a must have for Fantasy Football players this season. Four goals and four assists along with six clean sheets this season have made him one of the standout defenders in the league and he is a mainstay of a quality Wolves outfit.

Despite the ongoing uncertainty about his long term future Toby Alderweireld has been excellent again this season. He has been part of a Spurs side who have conceded just 35 goals this season and look certain to finish in the top four. They have also enjoyed success in the Champions League while Alderweireld has kept 11 clean sheets in the league this season, a pivotal factor in Spurs’ success.

Captain of one of the most impressive sides in the division this season, Conor Coady has been rock solid in the middle of the back three for Nuno Espirito Santo’s side. Against the top six, Wolves have been simply incredible and if they can pick up their form against the rest of the division next year they could be in with a shot of breaking into that big six. Coady is the calm influence and leader at the back, deserving of his spot in this team.

Everton’s best player this season has been their summer signing from Barcelona, Lucas Digne. The Frenchman came to Merseyside with a CV that could match most players in Europe but he has established himself this season as one of the finest left backs in the league. Replacing Leighton Baines looked like a tough task for anyone a few years ago, but Digne has come in and filled his shoes magnificently. 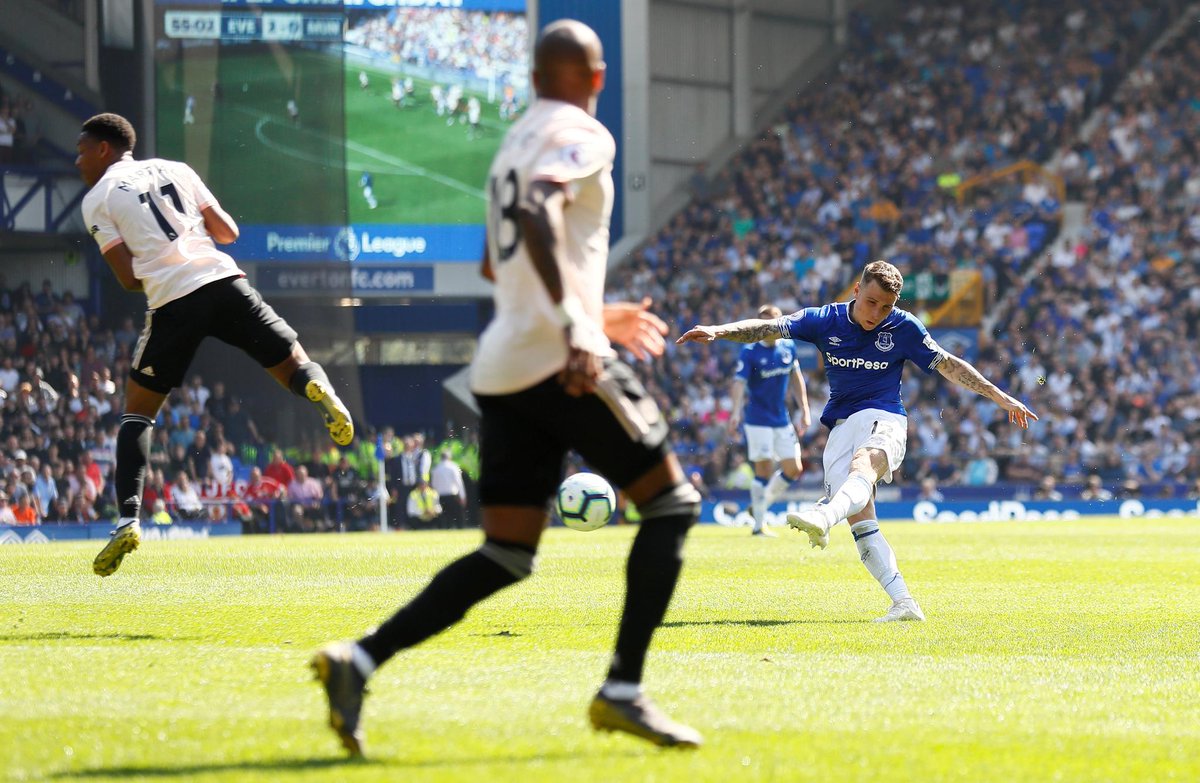 Watford deserve some credit for the season they have had under Javi Gracia, a man many tipped for the sack at the start of the season. Instead, they are playing exciting football, have a chance of Europe next season and are in the FA Cup Final! Their midfield has been crucial to their success and although Abdoulaye Doucoure is attracting attention from big clubs, former Spurs man Etienne Capoue has been outstanding this season.

Who would have predicted the turnaround that Moussa Sissoko has had this season. When Moussa Dembele left in January many Tottenham fans believed their midfield would be overrun, given the lack of strength and pace in the middle. Step forward Sissoko. The man who was written off as a flop has made the central midfield position his own and is now a dominant figure in the centre of the park.

Leicester’s James Maddison has taken to the Premier League like a duck to water and shone in what has been an indifferent season for the Foxes. Despite often being played out of position under Claude Puel, he has created more chances (94) than any other player in the Premier League this season and he is second on that list in the whole of Europe. For a debut season it has been great for Maddison whilst under Brendan Rodgers he can flourish next season.

Tottenham’s player of the season this year. Son Heung-Min has been pivotal to their success and stepped up to the plate in the absence of main man Harry Kane. 12 league goals and six assists, often in big games, Son has been huge for Mauricio Pochettino this season and established himself as one of the top forwards in the Premier League.

Tough one for the centre forward spot. Raul Jimenez has been a revelation for Wolves - impressing so much that they splashed out £30m to make his loan deal a permanent one. His 12 goals this season is a decent return but he is simply pivotal to Wolves’ system. Battering all of the top six, he could be an outside shout for the Golden Boot next season.

The biggest omission from the official PFA Team of the Season. He has bagged 16 goals and 13 assists this season, his greatest return in a Premier League season. That goal contribution puts him above Sergio Aguero, Raheem Sterling and Mo Salah this season and his individual contribution in a poor Chelsea side has been outstanding. 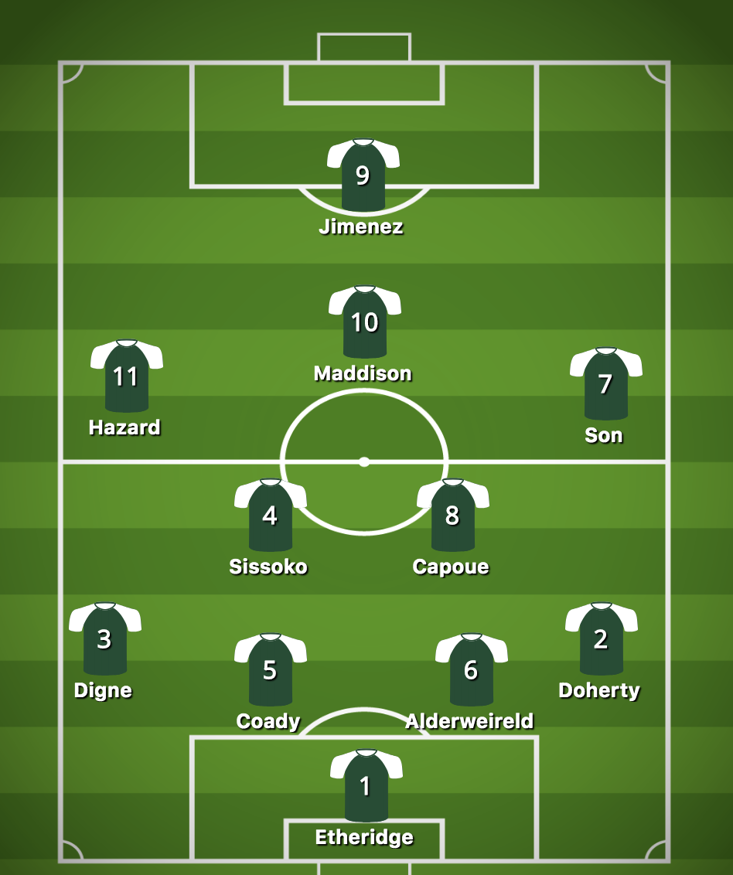 The Sportsman's alternative game of the season
More
football
Book Review - King Eric: Portrait Of The Artist Who Changed...
Leeds. Irwin. £1million. Title. Double. Palace. Kick. Ban. Seagulls. Return. Liverpool. Double. [ ... ]
football
Replacing Rapinoe And Morgan? The Ladies Who Can Light Up The...
Write off 2020. The best thing about it is remembering how good 2019 actually was. One of the undeniable [ ... ]
football
Wembley Woe: When England Lost To Germany At Euro ‘96
In the summer of 1990 England tasted their first ever penalty shootout heartbreak when they went out [ ... ]
football
Get Ready For A Nostalgia-Fest With Italia '90 Podcast Vincerà!
Hosted by Mark Godfrey and running from June 8th to July 8th, Vincerà! is a 24-part podcast series [ ... ]
football
Harry's Heroes, Vinnie Jones And Revenge At The Battle Of San...
When Vinnie Jones started crunching San Marino players left, right and centre, it was clear the friendly [ ... ]
football
Prodigal Talent Of The German Game Is Turning RB Leipzig Into...
This article first appeared in The Sportsman on 07/12/19 What were you doing at the age of 28? If it [ ... ]
football
''I Was Really Wasted'': When Jurgen Klopp Woke Up Hungover...
This article first appeared in The Sportsman on 05/09/19 Anyone watching the Amazon Prime documentary [ ... ]
football
Book Review - Yer Joking Aren't Ya?: The Story Of Middlesbrough's...
In 1997, Middlesbrough Football Club reached the finals of both the League and FA Cup, had the might [ ... ]
football
Carragher's Brilliant Podcast Shows The Greatest Games Are The...
What’s the greatest football game you’ve ever seen?  Jamie Carragher doesn’t [ ... ]
football
Red Bull And The Football Training Centre Of The Future... Today!
It is now 33 years since Red Bull sold its first ever energy drink. Pre-April Fool’s Day 1987 [ ... ]
football
On This Day Messi's Barcelona Tally Hits 500 In El Clásico Triumph
If you’re going to hit a milestone, and one that no one in your club’s illustrious history [ ... ]
football
The Secret Behind The Success Of Lineker, Shearer And Wright's...
The unavoidable hiatus to the broadcast of the BBC’s flagship football programme will not deny [ ... ]
football
Neymar Jr... Junior! Santos Like The Look Of Ronaldo-Imitating...
On March 7 2009, a slightly-built 17-year-old from Mogi das Cruzes, São Paulo, walked out onto [ ... ]
football
Business As Usual: A Beginners Guide To The Belarus Premier...
If you’re going out of your mind without your football fix, well we’re sorry you just haven’t [ ... ]
football
Why June 30 Could Be D-Day For The Fate Of Premier League Season
England captain Harry Kane has added his voice to the growing calls for the Premier League season to [ ... ]
football
You Heard It Here First - Brescia's Sandro Tonali Is Italy's...
Since winning the World Cup in 2006, it has been turbulent time on the international stage for Italy. [ ... ]
football
A Reunion With Ancelotti Could Resurrect Rodriguez's Stuttering...
No club chews up and spits out world class players quite like Real Madrid. Yet, their sense of entitlement, [ ... ]
football
'Quickly Kevin' Is The 90s Football Nostalgia Podcast To Beat...
While the majority of sports podcasts scramble to fill the minutes within the disruption of the [ ... ]
football
Where Did It All Go Wrong For Phil Neville And The Lionesses?
Winning, Phil Neville recently said at the SheBelieves Cup, is what would bring England’s women [ ... ]
football
''Drop A Few Hand Grenades'' Keegan's Advice To Scholesy The...
A packed out Wembley roared like one of those indomitable Three Lions to greet England’s new messiah. [ ... ]
football
Rise Of The Couch Coach: Coronavirus Causes 119% Surge In Football...
Thousands of us are flocking to virtual reality and gaming to help fill the void of no live football, [ ... ]
football
Review: Diego Maradona - Drop Yourself Into The Great's Chaotic...
When Diego Armando Maradona arrived at Napoli in 1984 for a world-record fee, the entire city ground [ ... ]
football
Arsenal's Tough Choice - Is Donyell Malen The Ying To Aubameyang?
Arsenal’s inability to manage the contractual situations of their biggest stars has plagued them [ ... ]
football
Robbie Fowler Is Making His Mark As A Manager With Brisbane...
The curtains came down on one of the last bastions of football standing in 2020 this week. Before the [ ... ]
football
Long Live The King: Eric Will Always Be Manchester United's...
“If ever there was one player, anywhere in the world, that was made for Manchester United, it [ ... ]
football
I Was There - The Day Football Came Home To Wembley
The closest I ever got to attending the original Wembley Stadium was on its final day in operation in [ ... ]
football
'Sunderland Til I Die' Heads To The Boardroom In Netflix's Second...
The docks have been left deserted. The wealth has dried up. Wearside has become an impoverished place [ ... ]
football
How Chief Creator Silva Became New Face Of Premier League
Football has been cast into uncertainty by the coronavirus pandemic. As it stands, nobody is sure if [ ... ]
football
Lookback:Chelsea 6-0 Arsenal When Arsene's 1000th Game Went...
It was supposed to be an occasion to celebrate for Arsene Wenger, but his 1000th game in charge of Arsenal [ ... ]
football
Ronaldo, Kane, Hazard - The Winners And Losers Of Euro 2020...
So as of this week Euro 2020 became Euro 2021. Another casualty of the global Coronavirus epidemic. [ ... ]
This website uses cookies
Cookies help us and our partners provide statistics. By browsing this website, you consent to the use of cookies in accordance with our Privacy Policy and Cookies Policy.
Accept & Close