Jose Mourinho has won a European trophy. There was a time when such a proclamation was business as usual. As inevitable as water being wet or Keith Richards outliving us all. But times have been hard for the legendary Portuguese manager, which makes Roma’s Europa Conference League victory a very special one indeed.

In the stats-hungry age of social media, trophy droughts are a big deal. Much has been made, including on these pages, of the fact Manchester United have not lifted a trophy in the five years since their 2017 Europa League triumph. Less has been written about the fact that Jose Mourinho, the ultimate serial trophy winner, had also not touched silverware since lifting that cup at the Friends Arena in Stockholm alongside his Red Devils squad. But unlike his crumbling old side, Mourinho has ended his trophy exile.

Mourinho has completed the set of UEFA-sanctioned European club trophies at the first attempt, lifting the inaugural Europa Conference League. As well as his own drought, this also snaps a 14-year streak without a trophy for his club, Roma. As if enough history wasn’t being made by their 1-0 victory over Feyenoord, the win also symbolised the first UEFA trophy the club have ever lifted. Their only other European trophy, the 1960 Inter-Cities Fairs Cup, is not recognised by the governing body.

The red half of Rome is enjoying a love affair with their charismatic coach at the moment. These are the circumstances Mourinho works best in. Chelsea adored their outspoken leader during his two stints, and were rewarded in kind with trophies. United put the League Cup and Europa League in their cabinet before the chasm between the stands and the dugout widened. Mourinho’s siege mentality made him no friend of the wider football community at Inter, but the fans themselves were on-board as Mourinho hoovered up an unprecedented treble. Even the notoriously fickle Real Madrid fans have chanted his name inside the Bernabeu in the years since his departure. 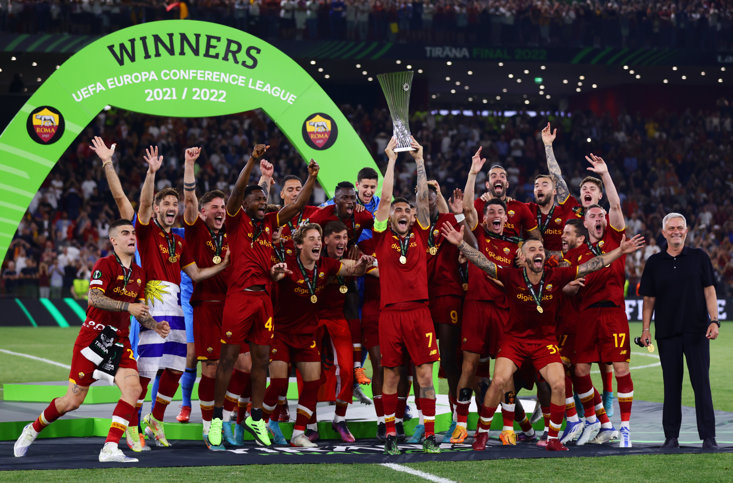 Beyond the Mourinho mutual appreciation society that is key to Jose doing his best work, there is also the matter of expectations. The 59-year-old certainly seems to thrive at clubs where expectations are lower. We have already detailed Roma’s trophy drought, and their 7th-placed finish last season meant Jose’s arrival was gratefully received. His struggles at Tottenham Hotspur and in the latter-half of his United tenure were forgotten, because his arrival felt like he was doing them a favour. For what it’s worth, their league position this season has only improved by one place, with the Giallorossi finishing sixth.

The point of expectations working in Mourinho’s favour can be stretched back for much of his career. His breakthrough at Porto, where he won the UEFA Cup and Champions League, is a case in point. No Portuguese side had won the European Cup since 1986, when Porto themselves had last held it. Nobody expected Mourinho to lead them to a repeat success nearly two decades later, and yet he did.

Lowered expectations also aided him at Chelsea. He was well-financed for sure, but nobody had brought the league title to Stamford Bridge since 1955. It was a similar story at Manchester United, who had laboured under David Moyes and Louis van Gaal before Jose brought trophies and a distant runners-up finish before imploding. Meanwhile, the mammoth pressure of Madrid saw just one La Liga title, one Copa del Rey and a lack of headway in the Champions League. The uphill battle of following Mauricio Pochettino at Spurs consumed him, too. When the expectations are sky-high, Mourinho tends not to hit the heights he does when his presence is seen as a glorious turn-up for the books.

What remains to be seen is what happens next at Stadio Olimpico. Mourinho says he’s staying and the fans will be delighted to have him. If history is anything to go by, that could be just the environment needed for this happy union to thrive. With the image of Mourinho holding a European trophy reminding us all of the natural order of things, perhaps the Portuguese coach will offer up another throwback by securing lasting success at a club where trophies are cherished, but not expected.