Manchester United drew 1-1 with Leicester City in a game that was slow to come to life. When it did ignite in the second half, there was controversy over a disallowed James Maddison winner. In truth, the Foxes perhaps deserved a winner, despite the correct decision to chalk off that particular effort. They certainly showed more desire than their hosts, who put on a display polluted by befuddled tactical thinking.

With Cristiano Ronaldo missing through illness, the onus fell on Bruno Fernandes and, inexplicably, Paul Pogba to serve as United’s forwards. It was a strategy that, unlike the Glazers’ bank accounts, showed little in the way of dividends. An early through-pass from Fernandes fell flat when Pogba checked his run, leading to an exchange of words.

At the other end, Kelechi Iheanacho linked play brilliantly to set up Harvey Barnes, who scuffed his shot wide. The former Manchester City striker would sweep a shot of his own wide later on, but kept finding a way through the United backline.

The best chance of the half for United saw Fernandes force Kasper Schmeichel to do the splits while making a save from a low side-foot. Fred’s high-press unlocked Leicester, and the Brazilian played Fernandes through intelligently. The Portugal star was not as lethal as he had been for his country this week though, and should have hit his shot harder.

James Maddison arced a good cross towards the ever-present threat of Barnes, who ran off Diogo Dalot and sent a volley just wide. United were having more of the ball, but the memorable chances largely fell to the Foxes in a cagey half.

United’s woes were best summarised by an incident late in the half. Raphael Varane attempted to switch the play towards Pogba. His left-to-right ball was hopeless, going out of play several feet away from the Frenchman. Pogba, and the fans inside Old Trafford, were exasperated. 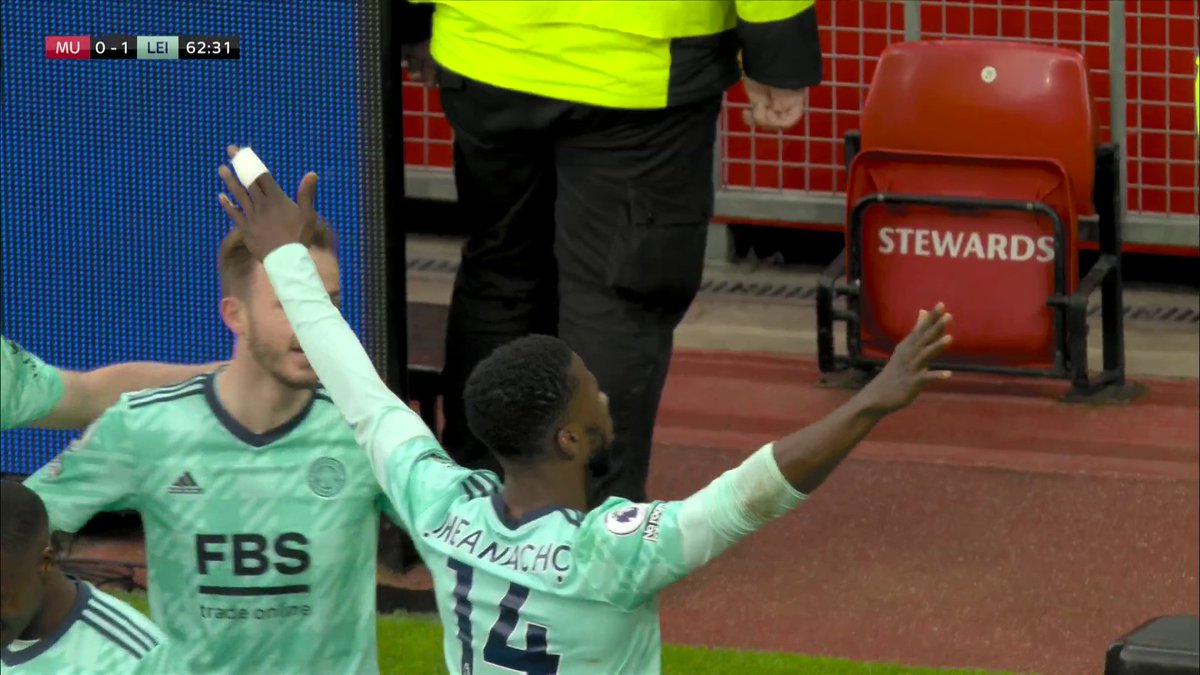 United’s toothless attack suggested a possible half-time introduction for Marcus Rashford. Instead, United’s only change was a forced one. Luke Shaw had picked up an ankle injury in the first half, and was replaced by Alex Telles.

Diogo Dalot made an intelligent run, out-foxing the Foxes with step-overs before crossing for Fernandes. The Portuguese midfielder reminded the crowd he is not a natural number nine with a tame header. But the passage of play did lift the mood at Old Trafford, as the Stretford End got steadily louder. It was into this environment that Rashford was unleashed, coming on in place of Scott McTominay.

Fred’s attempt to launch a counter-attack ended in disaster as his pass was intercepted and Brendan Rodgers’ side immediately fired back. A Maddison cross was headed home by Iheanacho while the United defence was still trying to mobilise. It was a comedy of errors from the home side, and one that the Foxes capitalised on ruthlessly.

Fred quickly atoned for his error. Fernades drew another acrobatic stop from Schmeichel with an edge-of-the-box strike. The Danish stopper could only palm it into the path of the on-rushing Fred, who fired the ball home to raise the decibel levels inside Old Trafford.

David De Gea did what he does on a weekly basis for this particular vintage of Manchester United, by pulling off a world class stop to deny Wesley Fofana. Maddison had dispatched another dangerous ball, this time from a free kick, and the defender got up well. De Gea’s athleticism saved the day, and the scoreline for United, as he got fingertips on the spinning ball.

Leicester dominated the ball as the match neared the home straight, and they almost got just reward for their efforts. Maddison, whose creative input had kept the tempo for the away side, this time got on the end of one to seemingly give Leicester the lead. Iheanacho tangled with Varane in the build up, hooking the leg of the French defender, before playing in the goalscorer. VAR intervened and the decision was reversed. The correct decision, but perhaps also a let-off after United’s lax approach to the previous few minutes.

Still Leicester pushed on, with United looking content to try and launch occasional counters. The responsibility for much of this fell to Fred, who got forward frequently to try and spread the play before inevitably receiving it back from players who could not find a way through. The away side were simply better organised and better acquainted with their gameplan.

United had one last gilt-edged chance, as Dalot outdid Daniel Amartey to get a cross into the Leicester box. Rashford air-kicked before Jadon Sancho hit his attempt into his own foot. It was a desperate miss, and a real wasted opportunity.

Rangnick’s side would have hoped to come back from the international break with a fresh perspective, and a determination to push on for a top four finish. They have began to stumble at that particular hurdle already, and they face an almighty way back now. Leicester gave them a real game today, and at times looked good value to win it. On another day, they might well have done. But for United, their supply of days to secure European qualification are running out.