Thanks for reaching out. You do the math. My bad. Americanisms, you gotta love ‘em.

We’ve all been guilty of letting one or two slip into our everyday chat. But our sporting world has largely been left untouched. Until now. For this is the season of the ‘quarterback’. Yes, that most American of sporting labels has started to be used in our beloved game of soccer (a step too far, sorry!) We’ve noticed commentators, pundits and fans refer to playmakers as ‘quarterbacks’, a new way to describe some of the best who play the beautiful game.

Initially sceptical, since change can be challenging, we’re actually bang on board with the term now. Period. In American football, the quarterback role is integral. He sits deep and patiently purveys the pitch and options in front of him, before controlling and launching all of the possession and attacks. He is the main conductor of everything in the team and makes them tick. New Liverpool signing Thiago will play the exact same role for Jurgen Klopp this season, if the evidence on show at Stamford Bridge on Sunday is anything to go by.

With a quick scan of the field and a deft swing of the boot, Thiago set the Reds on their way again and again. The Spanish international pulled all of the strings during the 2-0 win over Chelsea and defined the role of a footballing quarterback. Here’s more on Thiago and four other Premier League quarterbacks….

With great vision, exemplary control and an exquisite range of passing from deep, Thiago dictated play with ease against Chelsea. Signed from Bayern Munich having started his career with Barcelona, everyone knows of the Spain international’s quality and it showed on Sunday.

A half-time substitute, the 29-year-old completed 75 passes, more than any Chelsea player managed in the entire match. It’s the most for any player who has played a half of football since passing data was first recorded at the start of the 2003-04 season.With the fearsome trio of Sadio Mane, Mohamed Salah and Roberto Firmino buzzing around upfront and Trent Alexander-Arnold and Andy Robertson marauding down the wings, Thiago picked off passes at will and knitted everything together for a comprehensive and commanding victory. 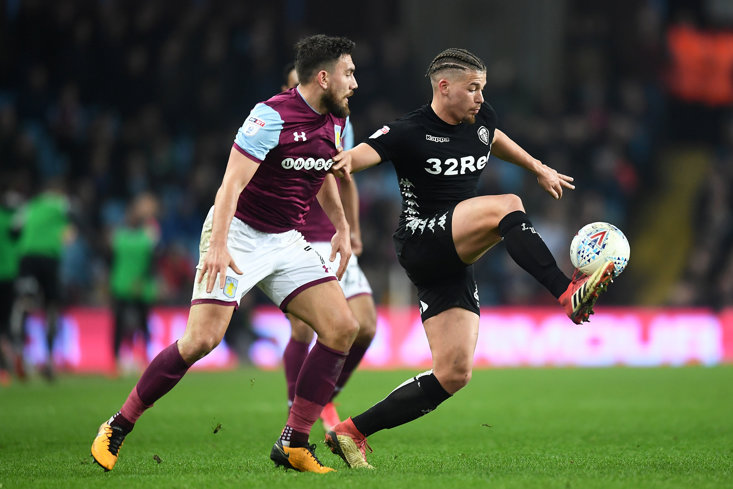 Affectionately dubbed The Yorkshire Pirlo by the Leeds faithful, Phillips has been a Premier League player in all but name for a few seasons now. Having helped haul his hometown club back up to the promised land last season after 16 years away, the 24-year-old is everywhere and key to Marcelo Bielsa’s all action set-up. Phillips is a busy and effective midfielder, using his physicality to dominate the centre of the park and he is always in the right place at the right time. Just as importantly, he is always there to pick the right pass too. Snuffing out danger, he snaps into action, wins the ball back and has his head up instantly, ready to get the Leeds machine moving again. Already this season, he has made 145 touches and played 24 forward passes to help his team score seven goals in two games against champions Liverpool and Fulham. 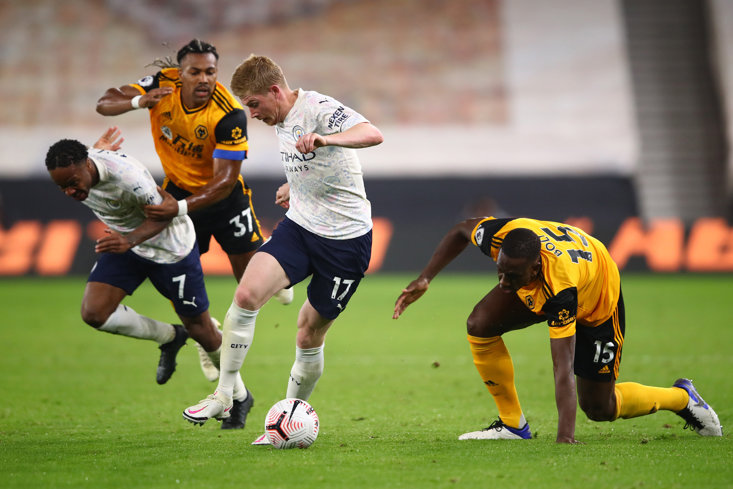 The Belgian playmaker has an incredible 66 Premier League assists to his name and is capable of picking out a team-mate from the tightest, most impossible of angles. Coming deep to spray balls wide or pulling short to ensure City keep a tight grip on the game, he is everywhere. De Bruyne is just two months younger than Thiago and, like the new Liverpool midfielder, will modify his game as he enters the autumn of his career. Following the departure of David Silva after a decade at the Etihad, the City talisman will take on even more responsibility in midfield, being a driving force behind everything Pep Guardiola’s men do, both offensively and defensively. However, his key aim will still be to pick out sublime passes at will.

The combative, industrious Portuguese boasts a tenacious drive on the ball. Poise and control are what he’s about, and a two-man axis with compatriot Joao Moutinho has seen Nuno Espirito Santo’s side impress in the Premier League. Sitting deep, he hunts for the ball, demands it even. Then, Wolves are on their way again, marching up the pitch thanks to Neves orchestrating.

“He has quality and talent. He practises and there’s a lot of repetition in the movement of the ball. It really helped us to break the game. It put us in a good momentum,” said his manager last year.After thumping home a pearler for Wolves as they won promotion back in 2018, he pointed to his temple in reference to Andrea Pirlo’s autobiography ‘I Think Therefore I Play’ with the Italian an inspiration for Neves during his earlier years. Pirlo isn’t a bad player to base your game on. 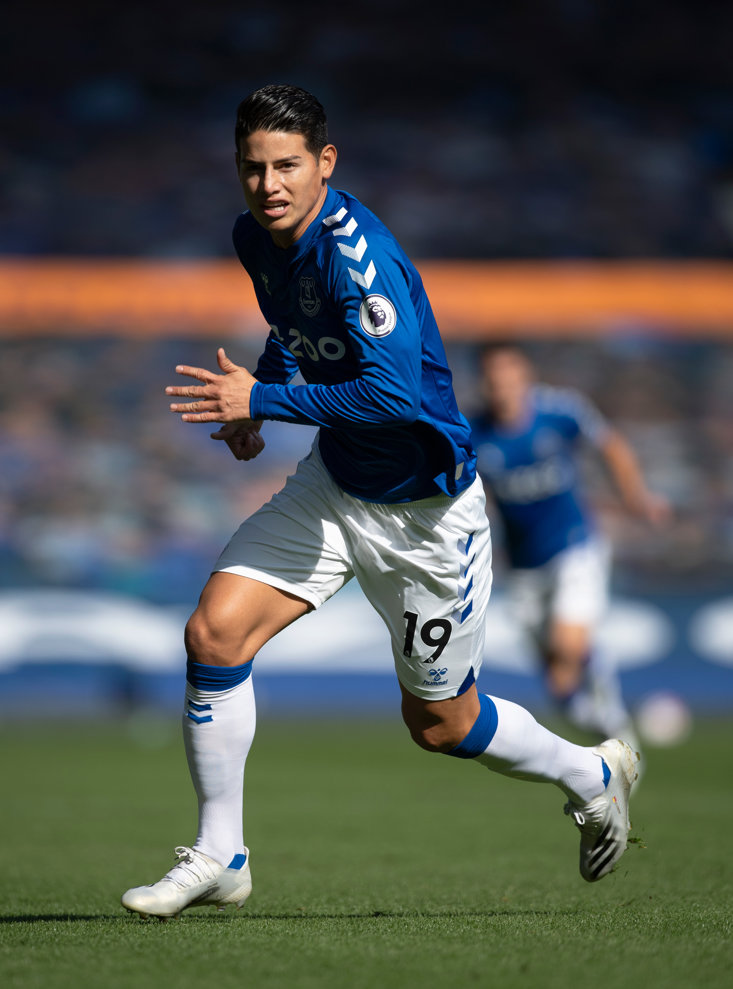 The Toffees have basically played with a cheat in their opening two games such has been Rodriguez’s influence on the game. Adapting to the Premier League with ease following his arrival from Real Madrid, Rodriguez plays further forward than a typical quarterback but is still the man everything goes through at Goodison Park. A focal point on the ball, he has been a constant supply to Everton’s left side, slicing the West Brom defence open with a laser-like through ball to Lucas Digne before lifting an excellent pass in to Richarlison who played in Calvert-Lewin to slide it home.

“The quality of James makes him play easy,” said manager Carlo Ancelotti. “When he gets space he likes to use his quality on passes and when he has no space and is under pressure he tries to play simple.” None of the passes from James’ left boot are easy, but boy does he make it look oh so simple.

x
Suggested Searches:
Tyson Fury
Manchester United
Marcus Rashford
Lewis Hamilton
F1
Air Jordan
More
football
Chelsea 0-0 Brighton Was Tedious But At Least The Premier League...
As Chelsea drew 0-0 at home to Brighton at Stamford Bridge to edge into the top four, it was a game [ ... ]
football
Football Unites To Stop Super League As Ed Woodward Resigns...
The European Super League seems dead in the water. Chelsea are reportedly looking to pull out, as are [ ... ]
football
Ryan Mason And Others Who Became Coaches After Playing Careers...
Ryan Mason will take interim charge of Tottenham when they host Southampton on Wednesday night before [ ... ]
football
Ask The Fans: We Will Never Accept This Chaotic NBA-Style Super...
From fans and pundits to players and managers, it is clear that the vast majority in England are against [ ... ]
football
Premier League Fixtures: Everything You Need To Know Ahead Of...
Three European Super League clubs are in action… sorry, three of the Premier League’s ‘Big [ ... ]
football
European Super League Will Rob Fans But Players Will Pay A Hefty...
‘Football is for the fans’, read the Leeds United t-shirts as they warmed up against Liverpool, [ ... ]
football
Leeds Score Late Leveller To Deny Liverpool Top Four Spot
Leeds will have seemingly had more fans backing them than usual on Monday night when they hosted Liverpool [ ... ]
football
Gary Neville And Jamie Carragher Urge Fans To Come Together...
Jamie Carragher has urged football fans to come together to stop the proposed Super League which has [ ... ]
football
Women's Super League: Title Decider Heads Three Key Games In...
Right, enough of all that other nonsense, here’s a Super League we can all get behind. The WSL [ ... ]
football
Could Man Of The People Jurgen Klopp Leave Liverpool After Super...
Jurgen Klopp has always been a man of the people. Whether you love Liverpool or truly despise them, [ ... ]
football
Jose Mourinho Sacked By Tottenham: Three Key Moments That Led...
Jose Mourinho has been sacked by Tottenham Hotspur less than a week before the League Cup final. He [ ... ]
football
European Super League Explained: Here's Everything We Know So...
Competitive football as we know it is being stolen by the so-called ‘biggest’ clubs in Europe [ ... ]
football
Kelechi Iheanacho Fires Leicester Into FA Cup Final For First...
Kelechi Iheanacho continued his stunning form in front of goal to fire Leicester City into the FA Cup [ ... ]
football
Man United Leave It Late To Beat Burnley As Mason Greenwood...
Manchester United last beat Burnley at Old Trafford back in February 2015 heading into this one. And [ ... ]
football
Fulham Suffer Heartbreaking Blow As Arsenal Score 97th Minute...
Fulham were cruelly denied an historic victory and a massive three points as Arsenal scored an equaliser [ ... ]
football
Leicester FA Cup Triumph Can Offset Top Four Worries And Show...
Leicester are flagging badly but this weekend’s FA Cup semi-final against Southampton could be [ ... ]
football
Chelsea End Man City’s Quad Dreams And Reach Fourth FA Cup Final...
Manchester City’s unprecedented quadruple dream came crashing down on Saturday evening after they [ ... ]
football
Norwich City Seal Fourth Premier League Promotion In A Decade
The Canaries don’t even kick a ball until Saturday evening but thanks to Swansea City and Brentford’s [ ... ]
football
Newcastle United Move Nine Points Clear Of The Drop After Win...
Newcastle United took another step towards securing their safety in the Premier League with a 3-2 win [ ... ]
football
Championship Relegation Battle Analysed: Which Team Has The...
Coventry’s 1-0 at Rotherham on Thursday night felt monumental in the Championship and with Norwich [ ... ]
football
Harry Kane Scores Brace But Spurs Top Four Hopes Are Dented...
Harry Kane continued his glorious scoring form against Everton by netting a brace which put him ahead [ ... ]
football
Everton And Tottenham's Faint Top Four Hopes Dangling On Their...
The games have come thick and fast and now we’re entering the business end of the season where [ ... ]
football
Aidy Boothroyd Sacked: Frank Lampard ''Perfect'' For England...
Aidy Boothroyd has been dismissed as England U21 manager after seven years in the England set-up. After [ ... ]
football
Arsenal Cruise Into Europa League Semis With Commanding Win...
Arsenal cruised into the Europa League semi-finals thanks to a phenomenal first-half performance, beating [ ... ]
football
Manchester City's Quadruple Hopes Enter Decisive Eleven Days...
As Phil Foden rattled in the final goal off the Borussia Dortmund post, it was definitive. Manchester [ ... ]
football
Premier League Fixtures: Everything You Need To Know Ahead Of...
The Premier League is here though we have a fractured programme of fixtures owing to the semi-finals [ ... ]
football
Arsenal's Season Rests On The Europa League And Mikel Arteta...
The most important game of Mikel Arteta’s short managerial career? Quite possibly. The biggest [ ... ]
football
Hillsborough, April 15, 1989: Remembering One Of Football's...
On April 15 1989, a warm, sunny, spring afternoon, Sheffield Wednesday’s Hillsborough stadium [ ... ]
football
Quad Dream Remains Alive As Pep And Man City Advance To Champions...
Pep Guardiola reached his first Champions League semi-final with Manchester City after coming from behind [ ... ]
football
Manchester City Ready To End Champions League Quarters Curse...
If Manchester City are to win a historic and unfathomable quadruple this season, they must break their [ ... ]