Football
News
Trent Alexander-Arnold In Numbers: The Liverpool Record-Breaker Epitomising The Strength Of Jurgen Klopp’s Side
Jack Porter
16:30, 13 May 2019

Liverpool’s wait for the Premier League title draws into another year, and another decade, after Jurgen Klopp’s Reds finished the season with 97 points, agonizingly just one behind champions Manchester City, who retained the title.

Though the season has failed to deliver, the closest of margins and the unparalleled campaign they have produced for an ultimate runner-up (the tally would have delivered the title in 25 of the previous 27 EPL seasons) means heads are high.

£75million centre-back Virgil van Dijk deservedly won the PFA Player of the Year award, the third Liverpool player to do so in the past half a decade, and the first defender in almost 15 years. The Dutchman’s accolade is the pinnacle of an absolute gluttony that have swamped the club and the squad that Klopp has assembled.

Van Dijk’s presence - an unparalleled one in today’s Premier League - improved a previously questionable defence immeasurably, producing the Golden Glove award for his goalkeeper Alisson, for most clean sheets and fewest goals conceded by any team in the top tier in 2018/19.

Whilst rivals Manchester City have spent an accumulated £123.5million on full-backs, the combined cost of Robertson and TAA amounts to just £8million, the Scotsman a snip from Hull City, and Alexander-Arnold rising through the academy ranks to become a vital first-team member.

Once the dust has settled on Liverpool’s ‘failure’ - for want of a better word - there may be a few jibes between the two, with Alexander-Arnold narrowly overtaking Robertson on the final day of the season for assists tallied.

With his contribution for Sadio Mané - who subsequently became a recipient of the shared Golden Boot for most goals in the season - against Wolverhampton Wanderers, Alexander-Arnold set a new record for most assists (12) by a defender in a single EPL campaign, overtaking Robertson’s stat of 11; the first time a Premier League team have had at least two defenders over 10 apiece.

England international Alexander-Arnold was woefully unlucky not to be credited with 13, against Wolves, with a deflection for Mane’s opener having his contribution officially ruled out.

Incredibly, Alexander-Arnold has doubled his haul in just his last six league appearances, and in just his second season as a full-time Premier League player. In 17/18, he played more minutes than any other teenager bar one - Tom Davies of Merseyside rivals Everton.

His total assist prolificacy is not the first record he’s set this season. Back in February against Watford, he became the youngest ever player to assist three goals in a single Premier League game, and has provided more assists than any other Liverpool player this campaign, in all competitions. At international level for England, in November he became the youngest Liverpool player since Michael Owen to register a goal for country, a record that was set nigh on two decades ago.

With the lad from West Derby at the tender age of just 20-years-old, Liverpool however will do well not to dwell on the lost title, and gleefully recognise that they have in Alexander-Arnold one half of a superlative-defying full-back duo the envy of managers not just on home soil, but across the continent. 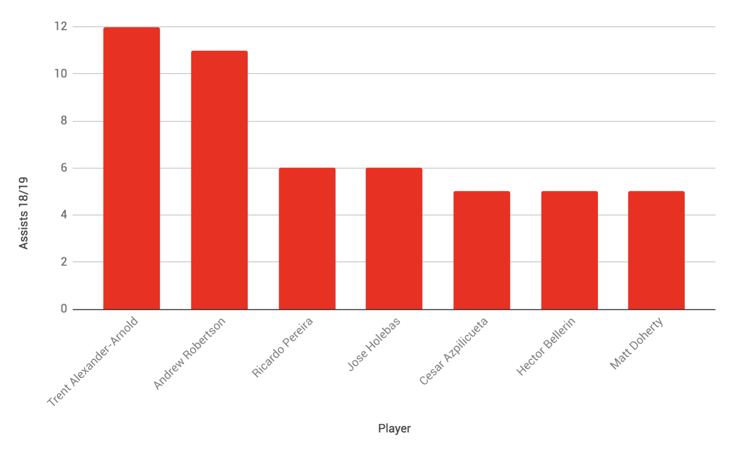