Football
News
Tear gas was used on innocent fans trying to get inside the stadium
Conor Keane
21:51, 28 May 2022

The night of the Champions League final is meant to be one of the best nights in the footballing calendar. Fans from all over the world descend upon a European city that has the honour of hosting one of the biggest sporting events.

They travel in their numbers at great expense, with friends and families for what should be a great evening of football and a once in a lifetime experience. And while they arrive with hope in their hearts, they also expect to feel safe.

Outside the Stade de France in Paris on Saturday ahead of the clash between Liverpool and Real Madrid, many supporters were far from safe in what has been one of the biggest UEFA failings in living memory. Supporters, who had been waiting patiently to get inside the ground to see the game they had paid with their hard-earned money for, were shamefully treated like criminals.

The governing body will be quick to try and cover their backs and say that many of the supporters turned up late and that’s what sparked the chaos that has tainted this football match, but the truth is it is they who did not prepare suitably enough for the event.

Security and police around the stadium were wrongfully assuming that those with tickets were trying to force their way into the French national stadium and they were subjected to tear gas as if they were the rioters outside the Capitol building in Washington D.C. They willingly used it on supporters, even with young children around which is just disgraceful. If ever something gave ammunition in the constant debate surrounding the discrimination from authorities towards football fans, this is it and UEFA need to put their hands up and say that they got it completely wrong and take responsibility for the horrific scenes that unfolded. 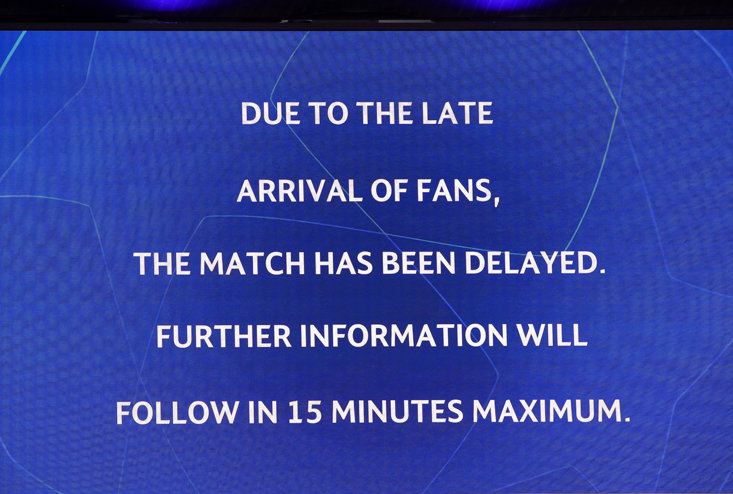 A handful of fans were pictured jumping over the fences in desperation, but this was a tiny minority amongst a large group that were treated like criminals. We have seen accounts of supporters being overwhelmed with emotion because of what they have witnessed and been caught up in. Some were separated from their friends and families and they were no longer looking forward to the match but hoping that they could be reunited with the people they travelled with and most of all that they were safe. Nothing about the organisation or handling of entry into the stadium was anything near to the word 'safe', and it lies at the door of UEFA.

To make matters worse, it has been reported that even journalists and other media personnel were being targeted by the police but had to be stopped by UEFA representatives. Whatever happens in terms of the match will no longer be the main talking point of this Champions League final, but how UEFA’s failings caused significant amounts of trauma that could have been so easily avoided.

So when the Champions League anthem was blasted through the speakers and was booed by all corners of the Stade de France, it was more than justified. UEFA and the police will have a lot to answer for in the coming days and no one will let this get swept under the rug.