Arsenal will have to play far better than this if they are to trouble any of the other big names that go into the bag for the Europa League quarter-final draw on Friday. Their performance in the 1-0 second-leg defeat to Olympiacos at the Emirates Stadium was symptomatic of their season.

Leading 3-1 from the first game and facing an opposition who gladly handed them possession and territory at times in the first half, Arsenal should never have made such hard work of progressing to the last eight. Aside from a Nicolas Pepe effort which deflected wide off the leg of former Gunner Sokratis Papastathopoulos and a Pierre-Emerick Aubameyang shot that cleared the bar, Mikel Arteta’s side offered little before Youssef El-Arabi’s 52nd-minute shot flicked off Gabriel and ended in Bernd Leno’s net.

There was never much doubt that Arsenal would go through, with the Greek outfit needing at least three goals to make a tie of it, but Arteta will have been far from pleased with the way his team handled what should have been a straightforward task.

Even late on, when Aubameyang had a great one-on-one chance to finish the tie, the skipper tamely chipped the ball well wide. If anything took the sting out of Olympiacos’ dying hopes it was only the needlessly red card of Ousseynou Ba after punched the ball in the direction of Gabriel Martinelli following a foul seven minutes from time. 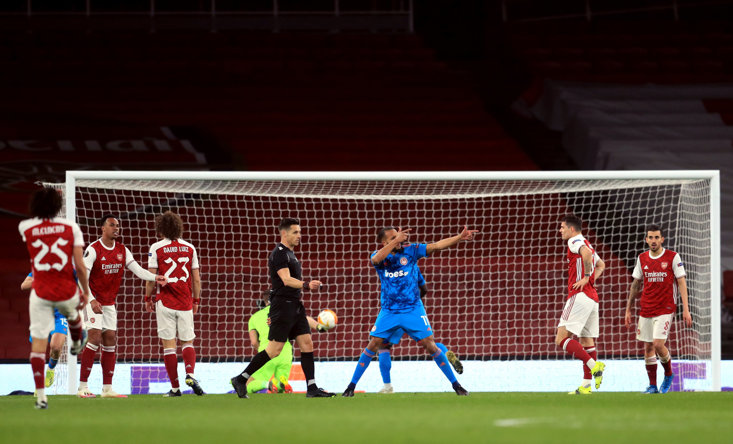 This Arsenal is not good enough to keep getting away with bad nights at the office. They bought themselves the luxury of being able to turn in tonight’s underwhelming display by grabbing a couple of late goals in Piraeus last week, but the Gunners simply don’t have enough about them to expect to get away with this kind of showing again.

Arteta has a squad boasting players who can show great quality, such as Aubameyang and Alexandre Lacazette but others who can mystify. On current evidence, this is Real Madrid’s failed Galacticos project of Zidanes y Pavones recreated but with no Zidanes and too many Pavones.

Arsenal have now conceded in their last 11 games. They came into this fixture with four wins and a draw in five matches but somehow found a way to make really hard work of a free-hit. On nights like this, they look every bit the side which lost to Southampton, Wolves and Aston Villa in January. The same bunch who started the 2020-21 season so terribly that Champions League qualification has only ever been on offer by way of a Europa League win.

But if this is the Arsenal which is going to turn up in even one of the possible five remaining matches in this competition, then they have no chance of being at Europe’s top table next season.