The right decision was made. No penalty. Andre Marriner looked at his monitor and watched reply after replay and the evidence was conclusive, Nathan Tella hadn’t been fouled and had instead tried to play the referee and every supporter watching.

Leeds United defender Diego Llorente couldn’t believe it when Marriner first pointed to the spot. The Spaniard hadn’t touched the tricky Southampton midfielder, but it was hard to tell on first view. Years ago, the referee would have stuck to his decision. He’d have had to. One look, in normal time and on the spot, a decision had to be made.

VAR has been criticised and ridiculed for 18 months. For some, it has quite simply ruined the game. It’s ruined the offside rule, played havoc with handballs, but, worst of all, it has ruined the joy of goals and the concept of being in the moment. However, on Tuesday evening at Elland Road it was used properly and efficiently and allowed justice to be served. 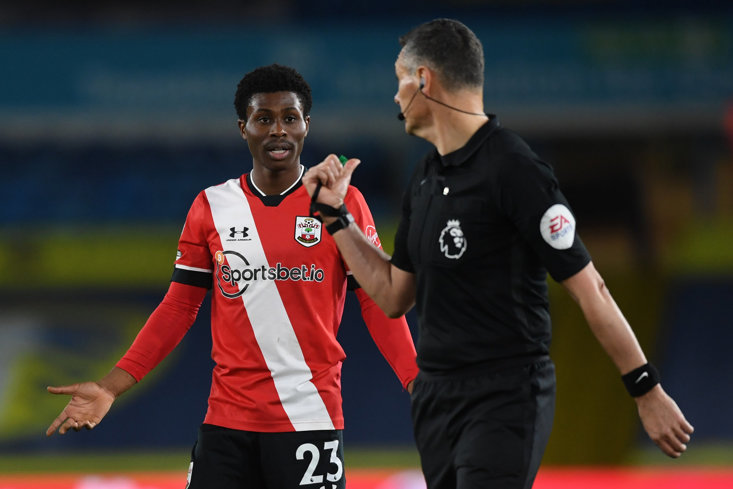 Marriner was advised by the VAR officials to check his monitor. The stakes are sky high in the Premier League, and decisions need to be correct. The referee marched over and watched the action. Again and again. He overruled himself, had all the tools at his disposal, and Leeds weren’t punished for Southampton’s “cheating” as TV pundit Graeme Souness called it at half-time.

Speaking on Sky Sports, the former Liverpool midfield general was clearly irked, claiming: “It’s cheating. For me, it’s sad that Tella’s not been booked for that. You can call it what you want, ‘simulation’, but it’s cheating and it’s trying to con the referee to get a penalty.

“That’s creeped into our game far more in recent years. When you look at the penalties given today, every game I’m working on, we have a situation where someone’s trying to steal a penalty.”

In the end, Leeds didn’t go behind from the spot. Instead, they turned in a clinical second-half display to win 3-0. It was a deserved victory, secured courtesy of a stunning Patrick Bamford strike, a Stuart Dallas peach and a late Raphinha goal. How cruel would it have been if they were a goal down because the Saints player looked to deceive everyone taking part?

VAR worked on this night in west Yorkshire and can be used for good. It doesn’t always have to spoil the spectacle, and in this instance it meant the home side weren’t cheated out of three points they deserved.

Of course, in an ideal world, players wouldn’t dive, they wouldn’t get the better of their fellow pros by pulling a fast one and going down of their own accord. Until then, VAR can be used for good and can catch these players in the act. Football has its answer to problem divers, even if the rest is a work in progress.

x
Suggested Searches:
Manchester United
Liverpool
Manchester City
Marcus Rashford
Premier League
More
football
It Would Take A Miracle For Wayne Rooney & Crisis Club Derby...
Wayne Rooney surely didn’t imagine his managerial career starting like this. His Derby County [ ... ]
football
Patience Needed With Patrick Vieira As Crystal Palace Look To...
Crystal Palace have taken a risk again. For four years they have been safely cocooned in the bosom of [ ... ]
football
Deja Vu And Disenchantment The Best Newcastle Can Hope For In...
It’s going to be another testing season for Newcastle United supporters, and this time around [ ... ]
football
VAR Changes Are A Step In The Right Direction, But Don't Expect...
The news that VAR will be 'dialled back' in the new Premier League season, with officials told [ ... ]
football
Brazil Close On Olympic Double As Spain Continue Phenomenal...
Brazil’s men’s football team have taken a giant step forward to retaining their Oympic title [ ... ]
football
Harry Kane Take Note: Five Footballing No Shows Who Tried To...
Harry Kane’s decision to stay away from Tottenham Hotspur training this week is nothing unusual [ ... ]
football
Joe Hart Is Exactly The Kind Of Astute Signing Struggling Celtic...
It is a move which will unite a club already knocked out of the Champions League with a goalkeeper who [ ... ]
football
What Did Fans Make Of Their Return To Competitive Football This...
Competitive football in England returned with fans this weekend for the first time since restrictions [ ... ]
football
Three Things We Learnt From Opening Weekend Of The Scottish...
The Scottish Premiership got underway this weekend as domestic football returned to Britain with a bang. [ ... ]
football
Is It Time For Men's Football To Give The Olympics A Miss?
As the Olympic football tournaments reach the semi-final stage it is worth reflecting on whether the [ ... ]
football
Coady And Jimenez Among The Keys As Lage Seeks Flying Start...
It is the dawning of a new era for Wolverhampton Wanderers this season. Nuno Espirito Santo has moved [ ... ]
football
Five EFL Championship Players To Watch In 2021-22
The Sky Bet Championship gets underway in less than a week and fans cannot wait for another season of [ ... ]
football
Reunion With Craig Gordon A Reminder Of The Leaders Celtic Are...
Celtic’s Scottish Premiership opener will include a reunion with ex-goalkeeper Craig Gordon when [ ... ]
football
Theo Walcott Can Finish His Career On A High After Returning...
Theo Walcott was once England’s youngest-ever debutant, a speedy forward ready to put the frighteners [ ... ]
football
Treble Or Failure? Expectations Are Sky High For Gerrard And...
This time last year Rangers were a team with loads to prove and a big hole in their trophy cabinet. [ ... ]
football
Sam Kerr-Inspired Matildas Send Team GB Crashing Out Of Tokyo...
Sam Kerr inspired Australia to the semi-finals of the Olympic football tournament after a 4-3 victory [ ... ]
football
Graham Potter Will Face His Sternest Test As Brighton Manager...
Brighton and Hove Albion are about to get underway in their fifth consecutive season in the Premier [ ... ]
football
The Bold, The Brash And The Bizarre, The Best Kits For The 2021/22...
The 2021-22 season is only days away and it is time to decide on some of the nicer football kits that [ ... ]
football
Celtic Champions League Woe: Postecoglou Can't Carry The Can...
“We never stop,” insisted Ange Postecoglou to his Celtic players. “If our movement’s [ ... ]
football
Time For Dyche And Burnley To More Than Just Make Up The Premier...
Burnley are about to enter their sixth consecutive season in the Premier League, and it is time for [ ... ]
football
Toby Alderweireld Exit Another Step Closer To End Of Pochettino...
Toby Alderweireld’s Tottenham Hotspur departure is another step closer to the end of Mauricio [ ... ]
football
USWNT's Olympic Woes Are Not New But The Concern Is Very Real
We’ve been here before with the United States women’s national team… just not very [ ... ]
football
Brentford Are Way More Than Just Ivan Toney As They Approach...
Brentford will be the 50th side to have ever played in the Premier League when they begin their season [ ... ]
football
#HerGameToo Survey Reveals Shocking Scale Of Sexist Abuse Towards...
The social media movement #HerGameToo aimed at stamping out sexism in football has released the results [ ... ]
football
Future Chelsea Boss? John Terry's Aston Villa Apprenticeship...
Steven Gerrard is about to lead a title defence with Rangers, Wayne Rooney is fighting fires at Derby [ ... ]
football
Scottish Premiership Betting Preview: Rangers To Dominate Under...
The Scottish Premiership is back this weekend with a tasty opening round of fixtures kicking off the [ ... ]
football
Will Watford's Hire And Fire Policy Keep Them In The Premier...
In less than two years, Watford have had four permanent managers. Xisco is the man currently in the [ ... ]
football
Varane & Maguire Partnership Could Be Crucial to Man United's...
With the impending arrival of French centre-back Raphael Varane from Real Madrid, Manchester United [ ... ]
football
Everything You Need To Know About The Opening Weekend In The...
The 2021/22 Scottish Premiership campaign gets underway this weekend as Steven Gerrard’s Rangers [ ... ]
football
Norwich Should Be Praised For Trying To Do Things Differently...
Norwich City are always beaten with the same stick. Even when they were promoted in May, their social [ ... ]