Football
News
Virgil Van Dijk One Of Four Reasons Why The Netherlands Should Be Dreaming Of Nations League And Euro 2020 Double Glory
Jack Porter
11:15, 22 Mar 2019

The Netherlands kicked off their 2019 in emphatic fashion with a comprehensive 4-0 win, Belarus their victims in the first Euro 2020 qualifiers, rocketing to the top of their group.

This Oranje are doggedly, determinedly trying to make amends for the disappointment of not reaching the World Cup Finals in Russia last year, only the second time of missing out in the last ten international tournaments available.

With former Southampton and Everton coach Ronald Koeman at the helm, the Netherlands are now undefeated in five games, and have suffered just one defeat in their last ten fixtures.

In 2018 with the newly established UEFA Nations League, the Dutch side set to dispel memories of their absence in Russia by finishing top of a group which contained the two previous World Cup winners France and Germany.

Through this qualification, the Netherlands will face England on 6th June 2019 in their semi-finals at the Estádio D. Afonso Henriques in Guimarães, Portugal. They could face either Portugal or Switzerland in the final at Porto’s stadium, the Estádio do Dragão, to become the inaugural winners of the competition.

The 2020 UEFA European Football Championship will be undeniably at the forefront of their mind however, with the hope of breaking that irritating duck of failing to win a major tournament in over three decades despite the plethora of enviable talent that has seeped throughout the squad.

Currently sixth favourites to win the Euros - behind France, Spain, England, Germany, and Belgium - here are three reasons why this particular Netherlands side could very well take the glory.

Liverpool’s Success Is The Oranje’s Gain

Though Koeman of course managed Everton for a single full season, the gaffer seemingly has no qualms employing a substantial Liverpool contingent in his set-up.

Regardless of whether his club break their near-three decade Premier League hoodoo, Virgil van Dijk is well on course to become the first Liverpool player in five years to win the PFA Player of the Year award. Simply immense throughout the season, he has not been dribbled past once in 2755 minutes of league football, and has made the most clearances, blocks, interceptions, duels and aerials won, and passes of any Liverpool player this season.

Gigi Wijnaldum - who has also impressed for Liverpool throughout the league campaign in the heart of midfield - has two in his last three for country, the same amount of goals he has managed at club level all season.

Babel On The Pitch

Aside from Koeman’s first game in charge - a 1-0 defeat to England when he played for 24 minutes - Ryan Babel has started all but two games and hasn’t failed to make the Netherlands matchday squad on any occasion since.

Usually deployed on the left-wing but with the ability to play upfront, the 32-year-old - now plying his trade at Fulham - has really found favour.

Incredibly, the former Liverpool man didn’t play a single game for the national side for six years!

Though he travelled to South Africa for the World Cup in 2010, he didn’t make an on-pitch appearance as the side under Bert van Marwijk got all the way to the final.

Out in the cold during the subsequent regimes of Louis van Gaal, Guus Hiddink, and Danny Blind throughout the wilderness years when he should have been known as Ryan-Air, venturing to such regions as Turkey and Abu Dhabi.

90 minutes in a friendly defeat to Germany in November 2011 seemingly marked the end of his international career. Since July 2017, Babel has firmly been back in favour, certifiably part of the future and not reduced to bit-parts or cameos.

Now Babel’s back baby and a fundamental part of this well-tuned Dutch set-up.

Memphis Depay has three in his last three appearances for the Netherlands; already half of his tally in his entire club domestic season. The former Manchester United man has only gone more than one game without scoring on a single occasion since August 2017.

Depay now spearheads this Dutch attack, dispelling the concern that he has scored just once for his club in Ligue 1 since mid-October. The Lyon forward was front and centre of the action at Stadio Feijenoord in Rotterdam, spearheading the attack once again as a loan Number 10.

Against Belarus, the 25-year-old got his brace after converting a spot-kick before the hour-mark having latched onto a loose back-pass in the opening, and was unlucky not to bag his hattrick after goalkeeper Andrey Gorbunov parried. Depay opportunistically turned it into an excellent cross for van Djik to head home and make it four.

No reason to celebrate with his fingers in his ears, Depay should no doubt be listening to those passionate Oranje crowd cheers on a regular basis.

OptaJohan
@OptaJohan
58% - Memphis Depay has either scored (5) or assisted (2) seven of the 16 Oranje goals under Ronald Koeman, while being directly involved in 58% of the 126 shots in those 10 matches (42 shots, 31 chances created). Trusted. 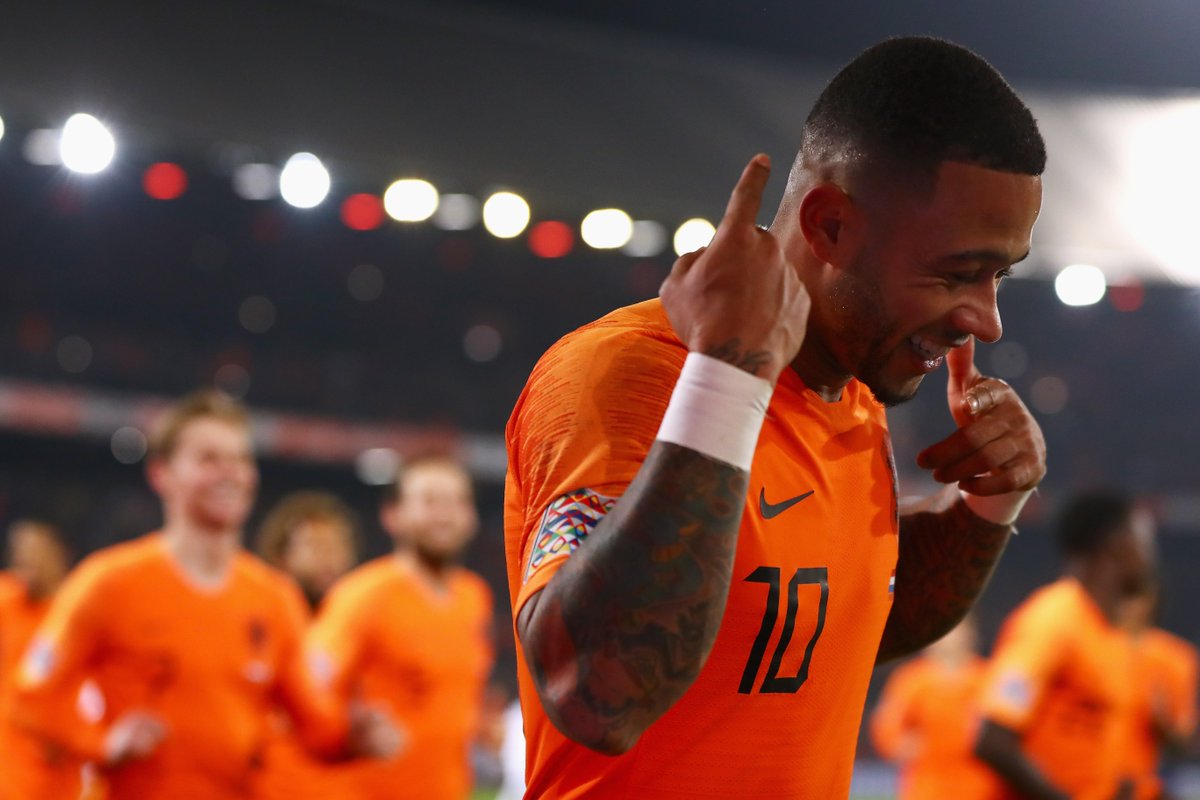 It’s so de Jong but so de Right

With Frenkie De Jong following the same trajectory as Cruyff after becoming Barca’s €75million man from die Godenzonen, the echoes are going to continually reverberate, despite their differing positions on the field.

De Jong is just a magnificent player and at 21-years-old, he’s certainly an old experienced head on young shoulders. Carried the play against Belarus and if you can find a moment where he put a foot wrong, we’ll buy you a pint.

OptaJohan
@OptaJohan
12 - Frenkie de Jong, who had the highest passing accuracy in the first half (97% of 59 passes), reached Memphis Depay 12 times, eight passes more than any other player. Connection.
87
395
More
football
Five Premier League New Boys That Are Set To Take Next Season...
A swift summer transfer window is on the cards, with just 48 days between Premier League seasons due [ ... ]
football
Bobby Robson And The Most Glittering Chapter In Ipswich Town’s...
Few in Ipswich could have predicted what was to come when Bobby Robson replaced Bill McGarry at the [ ... ]
football
How Tearing Down The Twin Towers Destroyed The Magic Of Wembley
On July 26, 1998, plans for a new Wembley were revealed to the world, promising a national stadium [ ... ]
football
Here's To The 2019/20 Premier League Season: Five Moments That...
It all began on August 9, 2019. 353 days later, a fortnight shy of a full entire year, the 28th Premier [ ... ]
football
Why Figo To Madrid Is Still Football's Most Controversial Transfer...
We’ve had Neymar, Sol Campbell and Carlos Tevez but on this day in 2000, Luis Figo completed the [ ... ]
football
Remembering Laurie Cunningham: The Football Pioneer Whose Legacy...
In 2016 the English Heritage scheme erected a blue plaque in Stroud Green, North London to celebrate [ ... ]
football
Book Review - King Eric: Portrait Of The Artist Who Changed...
Leeds. Irwin. £1million. Title. Double. Palace. Kick. Ban. Seagulls. Return. Liverpool. Double. [ ... ]
football
Replacing Rapinoe And Morgan? The Ladies Who Can Light Up The...
Write off 2020. The best thing about it is remembering how good 2019 actually was. One of the undeniable [ ... ]
football
Wembley Woe: When England Lost To Germany At Euro ‘96
In the summer of 1990 England tasted their first ever penalty shootout heartbreak when they went out [ ... ]
football
Get Ready For A Nostalgia-Fest With Italia '90 Podcast Vincerà!
Hosted by Mark Godfrey and running from June 8th to July 8th, Vincerà! is a 24-part podcast series [ ... ]
football
Harry's Heroes, Vinnie Jones And Revenge At The Battle Of San...
When Vinnie Jones started crunching San Marino players left, right and centre, it was clear the friendly [ ... ]
football
Prodigal Talent Of The German Game Is Turning RB Leipzig Into...
This article first appeared in The Sportsman on 07/12/19 What were you doing at the age of 28? If it [ ... ]
football
''I Was Really Wasted'': When Jurgen Klopp Woke Up Hungover...
This article first appeared in The Sportsman on 05/09/19 Anyone watching the Amazon Prime documentary [ ... ]
football
Book Review - Yer Joking Aren't Ya?: The Story Of Middlesbrough's...
In 1997, Middlesbrough Football Club reached the finals of both the League and FA Cup, had the might [ ... ]
football
Carragher's Brilliant Podcast Shows The Greatest Games Are The...
What’s the greatest football game you’ve ever seen?  Jamie Carragher doesn’t [ ... ]
football
Red Bull And The Football Training Centre Of The Future... Today!
It is now 33 years since Red Bull sold its first ever energy drink. Pre-April Fool’s Day 1987 [ ... ]
football
On This Day Messi's Barcelona Tally Hits 500 In El Clásico Triumph
If you’re going to hit a milestone, and one that no one in your club’s illustrious history [ ... ]
football
The Secret Behind The Success Of Lineker, Shearer And Wright's...
The unavoidable hiatus to the broadcast of the BBC’s flagship football programme will not deny [ ... ]
football
Neymar Jr... Junior! Santos Like The Look Of Ronaldo-Imitating...
On March 7 2009, a slightly-built 17-year-old from Mogi das Cruzes, São Paulo, walked out onto [ ... ]
football
Business As Usual: A Beginners Guide To The Belarus Premier...
If you’re going out of your mind without your football fix, well we’re sorry you just haven’t [ ... ]
football
Why June 30 Could Be D-Day For The Fate Of Premier League Season
England captain Harry Kane has added his voice to the growing calls for the Premier League season to [ ... ]
football
You Heard It Here First - Brescia's Sandro Tonali Is Italy's...
Since winning the World Cup in 2006, it has been turbulent time on the international stage for Italy. [ ... ]
football
A Reunion With Ancelotti Could Resurrect Rodriguez's Stuttering...
No club chews up and spits out world class players quite like Real Madrid. Yet, their sense of entitlement, [ ... ]
football
'Quickly Kevin' Is The 90s Football Nostalgia Podcast To Beat...
While the majority of sports podcasts scramble to fill the minutes within the disruption of the [ ... ]
football
Where Did It All Go Wrong For Phil Neville And The Lionesses?
Winning, Phil Neville recently said at the SheBelieves Cup, is what would bring England’s women [ ... ]
football
''Drop A Few Hand Grenades'' Keegan's Advice To Scholesy The...
A packed out Wembley roared like one of those indomitable Three Lions to greet England’s new messiah. [ ... ]
football
Rise Of The Couch Coach: Coronavirus Causes 119% Surge In Football...
Thousands of us are flocking to virtual reality and gaming to help fill the void of no live football, [ ... ]
football
Review: Diego Maradona - Drop Yourself Into The Great's Chaotic...
When Diego Armando Maradona arrived at Napoli in 1984 for a world-record fee, the entire city ground [ ... ]
football
Arsenal's Tough Choice - Is Donyell Malen The Ying To Aubameyang?
Arsenal’s inability to manage the contractual situations of their biggest stars has plagued them [ ... ]
football
Robbie Fowler Is Making His Mark As A Manager With Brisbane...
The curtains came down on one of the last bastions of football standing in 2020 this week. Before the [ ... ]
This website uses cookies
Cookies help us and our partners provide statistics. By browsing this website, you consent to the use of cookies in accordance with our Privacy Policy and Cookies Policy.
Accept & Close