If the measure of a man is the impact he leaves on others, then Walter Smith is a man with an immeasurable legacy. Sir Alex Ferguson, Pep Guardiola, Graeme Sounness and Steven Gerrard may not agree on much, but they were among countless members of the football fraternity to register loving tributes to the late legend when he sadly passed away last week. Smith leaves behind not only an incredible football legacy, but a reputation as one of the most beloved men in Scottish football. This was typified by the fact Celtic fans were pictured laying wreaths outside Ibrox, showing that the respect Walter Smith has garnered carries across even the widest chasms of division.

The modern way of gauging a manager’s quality is usually numerical. The nuances are overlooked and judgments are made simply on the number of trophies. By this fashionable 21st century metric, Smith’s managerial career is staggering. During two stints with Rangers, the Lanark-born coach won 10 league titles, five Scottish Cups and six Scottish League Cups. He also steered the club into the final of the UEFA Cup in 2008. Named Manager Of The Year in Scotland seven times, the numbers behind Smith’s career are untouchable.

The influence he had in football goes even deeper. Darren Fletcher credits Walter Smith’s brief tenure as Manchester United assistant manager with unlocking a new, steelier side to Cristiano Ronaldo’s game. Having joined in March 2004 as a replacement for Carlos Quieroz, Smith linked up with Ferguson once again after the pair had steered Scotland at the 1986 World Cup. Ronaldo at the time was a talented but often frustrating teenager, more prone to a needless step-over than a talismanic late equaliser.

Speaking to beIN Sports, Fletcher said: “When Ronaldo's doing his skills, the lads were fouling him. The first six months of the season, there'd be fouls given as you'd expect, and [then] Walter said: 'No, no fouls'.” The former Everton boss’ decision to stop awarding free-kicks led to what Fletcher describes as “open season” on the Portuguese winger.

While many players would have wilted under Smith’s unusual methods, Ronaldo thrived. “Ronaldo starts moving the ball because he's sick of getting kicked.” says Fletcher, "Now it starts clicking in his head: 'I'm starting to score more goals, now I'm starting to make an impact in games.' That was the beginning of Ronaldo's transition." 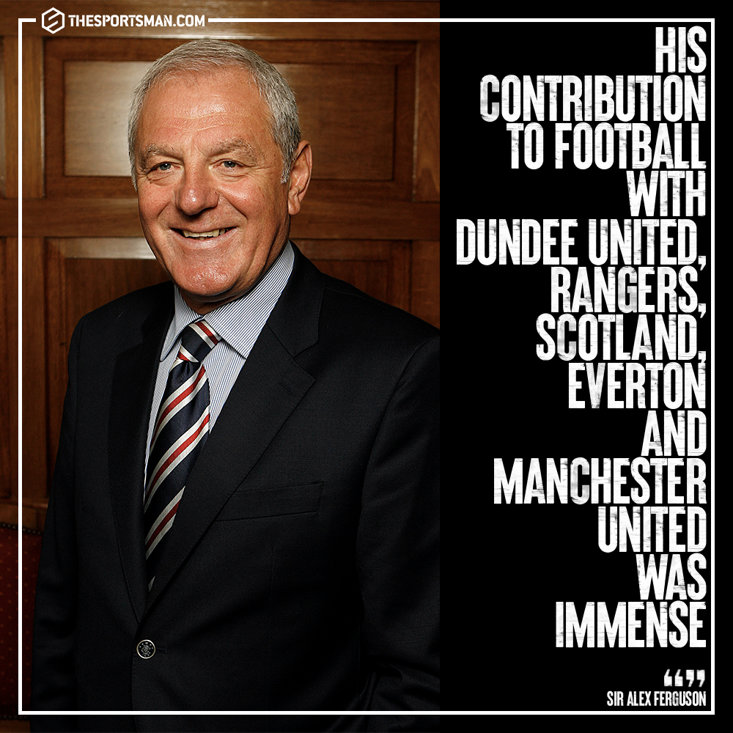 Smith’s brief but influential tenure at Old Trafford was not his only spell in England. The trophy-laden Scottish coach also spent three seasons managing Everton. Smith was brought on board with promises of unlimited funds and big-name signings, but instead had to oversee an era of cost-cutting. Star striker Duncan Ferguson was sold behind Smith’s back, which brought him to the brink of quitting. A number of Everton’s other top players followed Ferguson out of the door, as the club struggled to balance the books. Smith stayed, and finished 14th, 13th and 16th in his three seasons at Goodison Park before being replaced by David Moyes.

A term as Scotland manager would follow, before Walter returned home. Ibrox welcomed their returning hero, and he responded in kind. The final job of Smith’s managerial career would see him take over a Gers side that had finished 17 points behind Celtic the previous season. By the time he left, he had won a further three Scottish league titles, as well as taking the club to that UEFA Cup final. This wildly successful return to Rangers was an appropriate postscript for a club legend.

Rangers fan groups are calling on the club to rename a stand at Ibrox in tribute to Walter Smith, and it is hard to argue with such a decision. He was an incredible influence on British football, and a man who touched the hearts of all who met him. The last word is best left to Ally McCoist, who served with Smith as a player and as his assistant manager at Rangers. "A great family man, was the gaffer, but he was so much to so many people, myself included… He was like my second father, and then he turned into one of my best mates.”