Football
News
Only Salah has been involved in more goals this season than Emmanuel Dennis
Conor Keane
11:03, 10 Dec 2021

There is always a surprising name that crops up in the stats records in football. The Premier League is inundated with quality goalscorers and goal creators. And those who stand tall above the rest are the players who are skilful in both areas. Liverpool’s Mohamed Salah is the current trailblazer in England’s top-flight with a staggering 22 goal contributions, but the player next in line is not one you would expect.

Watford’s Nigerian attacker Emmanuel Dennis is second only to the Egyptian for goals and assists with an impressive 11 in the Premier League. The Hornets forward has found the back of the net on six occasions and assisted his teammates five times, establishing himself as one of the most high-performing players in the country this season. Three of his goals have come in the last four matches, suggesting he is beginning to adapt well to the demands of the league, and his recent form will have the Hornets supporters jubilant. New boss Claudio Ranieri has seemingly unified the dressing room, and Dennis has been the standout performer since the Italian took over. 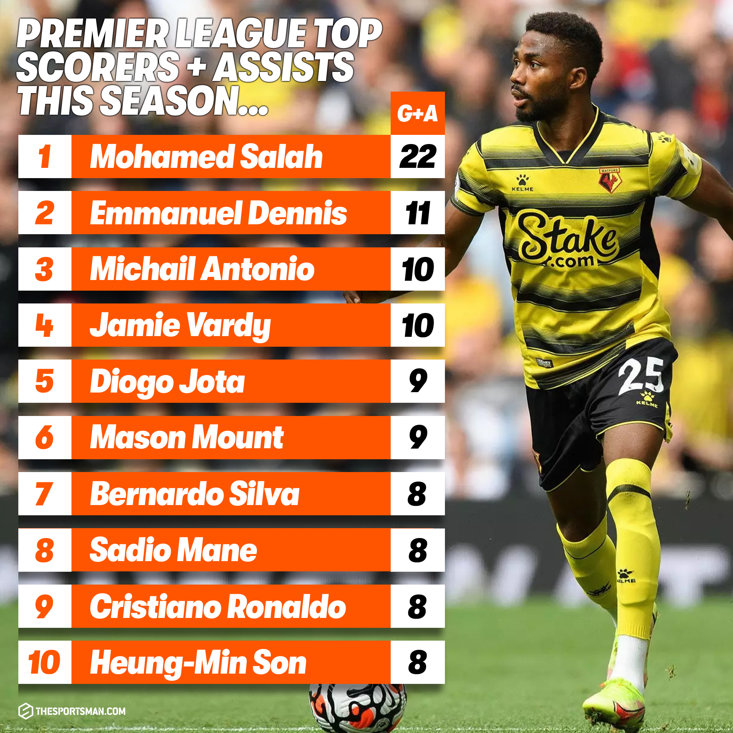 The fact that only the wonderful Salah has more direct goal involvements than him proves how much of a talent the Watford man is. Dennis has also scored in all four of Watford’s league victories this campaign, which only further highlights his importance to Ranieri and the club. The 24-year-old’s efforts at Vicarage Road currently have Watford three points clear of the relegation zone, and his current rate of improvement suggests he is only going to improve as the season progresses. His boss is grateful to have him among his ranks, especially with the gravity of the task at hand.

“I’m not surprised because he is a very good player,” Ranieri told the Evening Standard of Dennis’ recent form. “He scored twice at the Bernabeu [for Club Brugge]. Anyone who scores two at the Bernabeu is not a normal man.

“He has speed, intelligence, he is generous, and I like how he plays. He has to improve because he is young, but I have a very good relationship with him, and all of my players.”

Credit for Dennis playing with consistency and confidence has to partly go to the 70-year-old, as nine of the striker’s goal contributions have come since Ranieri took over in October. And with the physically demanding festive period underway, the Hornets boss will be hoping that Dennis continues to fire on all cylinders as they will be desperate to extend the gap between themselves and the bottom three.

Right now, Watford have an exceptional talent on their hands, and if they are to get through the quagmire of the relegation battle, Dennis will be the reason that they do.