Football
News
United had 22 shots against Watford and could not break down the relegation strugglers
Joey Mills
12:55, 28 Feb 2022

Manchester United mustered 22 shots on goal in their 0-0 draw with Watford at Old Trafford on Saturday afternoon. Of these attempts, just three were on target. United mustered vastly superior possession and passes, but their profligacy in front of goal saw their endeavour count for naught. Another frustrating draw played out in a game that United really should have been winning. It wasn’t supposed to be like this.

Putting aside the commercial appeal of the returning king, Cristiano Ronaldo’s Old Trafford reunion was supposed to achieve one thing. To bring a huge number of goals into an already attack-minded squad. The Red Devils hierarchy had no reason to expect this wouldn't be the case. For all the smirking at Ronaldo not fitting in at Juventus, he netted 101 goals in just 134 games in Turin. Even at his advanced age, it appeared Ronaldo was back in Manchester to pick up where he left off.

At times he has looked like doing just that. The Portugal international has six goals in his six Champions League outings, and the majority of them arrived in game-saving moments. It is no stretch to say United would not have progressed from the group stage without him. But the Premier League has been another matter entirely. A haul of nine goals from 23 games is by no means horrendous, but Ronaldo is not usually subject to the standards of the rank and file.

Liverpool’s Mohamed Salah tops the charts with 19 goals this season, while Ronaldo finds himself joint-sixth, alongside teammate Bruno Fernandes. The 37-year-old is also level with Watford’s Emmanuel Dennis, Emile Smith Rowe of Arsenal and Leicester City’s ageless Jamie Vardy. It’s fair to say this is not the sort of company Ronaldo was expected to keep upon his return to the club he bewitched as a teenager.

Saturday’s game showed Ronaldo’s struggles in microcosm. There was frustration at passes sent astray, hopeless snatches at half-chances and a wide-ranging failure to make the Hornets pay for crossing Cristiano. It was a characteristically uncharacteristic display. The sort of non-Ronaldo that we’ve become used to this season.

The onus is not just on the former Real Madrid man though. After all, he is the club’s top scorer in all competitions this season. There are other forwards at the club who should be doing more. Edinson Cavani has been on a downward slide since signing his ill-fated contract extension. A mixture of injuries, international commitments and goal-shy performances in his rare starts have seen his second season become a poor sequel to his galvanising first. 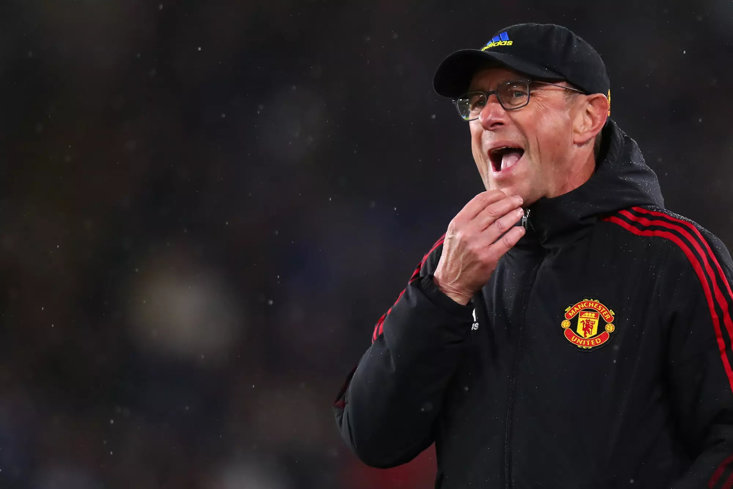 The absence of United’s third-choice central striker is well-documented and complex. Mason Greenwood is currently out on bail pending further investigation for a number of charges, including rape, sexual assault, assault and threats to kill. Horrendously, some online trolls were calling for Greenwood to return to the side in the wake of United’s stalemate with Watford. Such a return is unconscionable and, thankfully, impossible as far as the club are concerned. The debate over his absence pales in comparison to the severity of the charges he faces.

Marcus Rashford has played centrally before, but has made the wide-left berth his own in recent seasons. The England international has been unusually toothless this campaign. After a brief upturn in form, Rashford once again looks to be struggling for confidence in front of goal. His travails have not been helped by interim manager Ralf Rangnick deploying him on the right-wing, a position in which he rarely excels. It is clear to see there is a player in Rashford, but it’s a player we have rarely seen this campaign.

Beyond these names, United also have Anthony Martial on-loan at Sevilla. One goal in four games at his temporary club does not hint at United missing much, and the Frenchman has struggled to make an impact since his career-high 2019/20 campaign.

Ultimately, United have paid the price for over-relying on Ronaldo. He has a creditable 15 goals in 30 games this season, a good tally by conventional measures. But you don’t sign CR7 for convention. It is fair to say he was expected to shoulder the burden and drag this talented but mismatched and often misguided group to the next level. At 37, that appears to be too much to ask of a player who has already stayed at the top of his game for longer than most footballers play.

After an expensive experiment in nostalgia that has only partially worked, United will no doubt do what they always do in these situations. Money will be spent in the summer on the acquisition of a new centre-forward. Whether Ronaldo stays or goes, a new striker is a necessity. Cavani’s deal is expiring, Martial wants to leave and Greenwood’s situation will not be resolved any time soon.

The addition of a new star goal-getter does not aid Rangnick’s cause this season though. After a soft start to life in the hot seat, the German faces Manchester City, Liverpool, Atletico Madrid and Tottenham Hotspur in March. These are the sort of teams you won’t get 22 chances against. The Red Devils cannot afford to remain wasteful, nor can they allow themselves to rely solely on Ronaldo. The Stretford End is known to demand of its team that they “Attack! Attack! Attack!”. Manchester United would do well to heed this advice.