In a game that will likely go down as the biggest shock of the season, Thomas Tuchel’s incredible start to life as Chelsea boss was brought to a halt in stunning fashion as they were thumped at home to Sam Allardyce’s relegation-threatened West Brom.

It almost looked like it would be business as usual for Chelsea too, when a curling Marcos Alonso freekick was denied by the post before falling at the feet of Christian Pulisic who slotted into the open net with ease to break the deadlock.

The first half and ultimately the match went downhill soon after for Chelsea, though. With 30 minutes on the clock, Thiago Silva was given a second yellow card for a lunging tackle on Okay Yokuslu, catching the midfielder high up on the leg. At the age of 36 years and 193 day old, the Brazilian actually made history by becoming the oldest ever player to be sent off in the Premier League.

Things went from bad to worse for Tuchel’s side when, in true Allardyce style, Sam Johnstone's clearance up field somehow found its way all the way through to Matheus Pereira, who with just the advancing Edouard Mendy to beat, lobbed the goalkeeper for a sumptuous equaliser.

Chelsea hadn’t conceded in five consecutive home games before kick-off while West Brom were on a 13-game winless run in London, but it was the Baggies who looked the in-form team and they completed their turnaround on the stroke of half-time thanks to that man Pereira once again.

Chelsea were punished after giving the ball away in a dangerous area, allowing Mbaye Diagne to feed Pereira, helping the Brazilian to find the back of the net with a clever low finish at the near post. As the two teams made their way to the tunnel for half-time, it was Chelsea, who have been in imperious form under the guidance of their German manager, that were on the ropes. 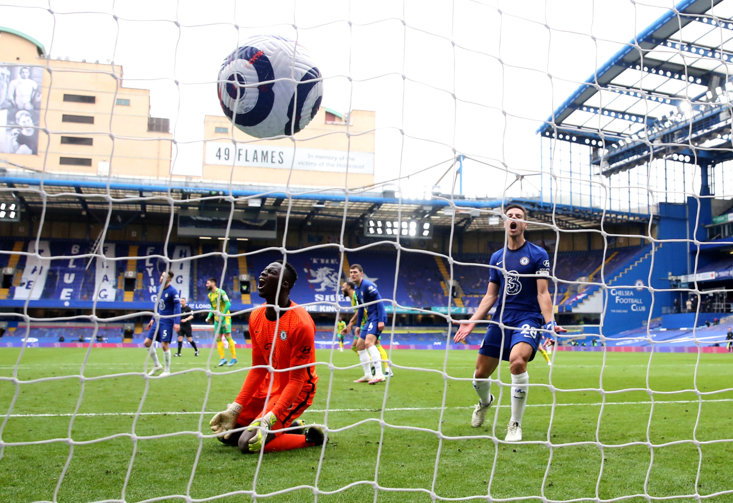 The Blues entered the second half with renewed vigour and were unlucky not to bring the scores level when a Reece James cross was palmed out by Johnstone, but only as far as the feet of Alonso, who could only strike the post.

The madness of that entertaining first-half returned with a vengeance when the game saw three goals in under ten minutes. West Brom turned into Brazil for their third of the game when, after some sensational build-up play, Darnell Furlong got free down the right and from his cross, there was Callum Robinson to volley home an unstoppable shot against his former club. It will undoubtedly be considered in the conversation for Goal of the Season.

Football on BT Sport
@btsportfootball
The Baggies are in dreamland! 🔥
Callum Robinson with a superb volley to extend West Brom's lead over 10-man Chelsea! 💥👏
112
789

Five minutes later, Chelsea were left stunned after yet another stunning team goal from West Brom made it 4-1. Breaking through Pereira and Robinson from a Chelsea corner, Conor Townsend was found in the box and a nifty back heel set up the unmarked Diagne for a composed finish into the far corner.

With 20 minutes on the clock, Mason Mount reduced the deficit to two goals when Alonso was sent clear down the left and his low ball across the box picked out Timo Werner, who found the unmarked Mount to coolly slot in. That slither of hope proved futile though when Robinson made it four goals in three appearances against Chelsea. Pereira, who was simply outstanding this afternoon, played in Robinson who lofted the ball over the on-rushing Mendy to make it 5-2.

"I am delighted - not only with the win, but the style," Allardyce said after the game.

"It has been coming for a while, but our lack of finishing has cost us. What we saw today is what we have been missing. The quality of our goals and our football brought us a fantastic result. We were desperate for it.

Even though they played the majority of the match with a man short, this was unquestionably the worst performance Tuchel has overseen since moving to London and, though they still sit in fourth in the table, they’ll be weary that West HAm are just two points behind them in that all-important Champions League qualification spot with a game in hand against Wolves on Monday.

For West Brom and Allardyce though, they now find themselves eight points from safety with eight games left to play… they couldn’t, could they?