They say that you never remember beaten semi-finalists unless you’re one of them, and England have had so many near misses at this stage over the years. Whether by penalties in 1990 and 1996 or through late, painful defeat in normal play as in 1968 and 2018, they have found ways to not get the job done.

But in 2021, they have finally done it. They needed a huge stroke of fortune, but after 55 years, England are through to a major final. And doesn’t it feel amazing?

Harry Kane’s goal in extra-time after he followed in Kasper Schmeichel’s penalty save capped off the Three Lions’ 2-1 victory over Denmark which sends them to Sunday’s Euro 2020 final against Italy.

Mikkel Damsgaard’s excellent free-kick opener was the first dead-ball goal of the tournament, and it immediately had people debating whether England could battle their way back after a first concession at the Euros. But it took only nine minutes for Raheem Sterling to counter frustration with sheer delight.

Sterling is brilliant in what he is able to put behind him. He didn’t lunge for a Harry Kane cross that he might have had a chance to reach, he let a ball go straight under his boot for a throw-in as he tried to think one step ahead, he saw Kasper Schmeichel get in the way of a close-range shot which he really ought to have buried. But it is the fact he keeps making the runs, keeps getting involved, which makes him such an immense asset in the final third.

That’s what happened when he made a darting run into the centre of the area as Bukayo Saka squared Harry Kane’s brilliant through-pass, forcing Simon Kjaer into a lunging challenge which diverted the ball into the top of the net. 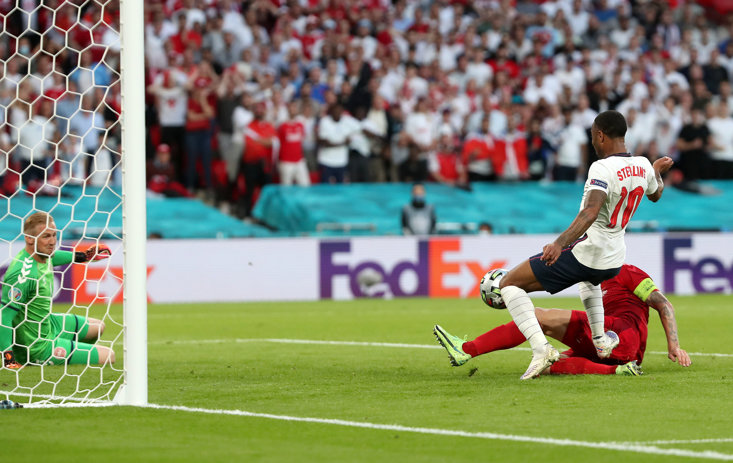 Thereon, the game went through phases. England dominated up to the break but then Denmark looked to be more likely from open play early in the second half. By the time extra-time was beckoning, the Danes were on their knees and England were back on top.

Gareth Southgate kept his cards close to his chest for long spells but when he brought on Jack Grealish for Saka it meant Sterling moving to the right. From there, he would make the ultimate impact shortly before half-time in extra-time when coaxing a challenge out of Joakim Maehle which referee Danny Makkelie decided was worthy of a penalty. Even on a third and fourth look it was hard to decipher whether there was really any contact, but the VAR backed the man in the middle.

Kane stepped up with a nation’s collective heart in its mouth. Schmeichel guessed the right way but the ball came straight back to the England captain, and, with all the frustration of the last 55 years, he slammed home the rebound to put his side ahead.

England had 16 minutes still to negotiate, but negotiate them they did. With Wembley buzzing and the rest of the country biting their finger nails, the men in white went about their business like a team so used to being in this position rather than experiencing it for the first time.

At the final whistle it was pure elation. It was only ever going to be pure elation. This is what it feels like for England to qualify for a major final. Italy await now, but you will have to forgive us if it takes a few days to get over this result first. We’ve waited a long time for this feeling.