Just nine Spanish football clubs can proclaim to be La Liga champions in the competition’s 90-year history. In the 1999/2000 season, a third of them were relegated from the top tier.

In the very same season that Deportivo La Coruña won their first and only La Liga title in their 113-year existence, Atlético Madrid were relegated to the Segunda División alongside Sevilla (20th) and Real Betis (18th); all three former champions.

A brilliantly crazy way to end the century, it remains the last time neither Barcelona nor Real Madrid picked up any domestic silverware in a single season. It also marked the first time since the early 1930s - pre-Spanish Civil War - that Atlético Madrid wouldn’t be playing in La Liga.

Atleti won just nine games for their campaign under two different managers; Claudio Ranieri, and Radomir Antić. Incredibly, they also finished runners-up in the Copa del Rey, losing out to Valencia. By that time Antić - who also predated Ranieri - was out again, replaced by former ‘B’ coach Fernando Zambrano, who himself last just  under six months.

Ahead of the season, Ranieri had purchased striker Jimmy Floyd Hasselbaink from Leeds United for £12m. Signed on August 4 1999, he had been the top scorer at Elland Road for the past two seasons but Leeds refused to give him the pay rise he wanted. Though Hasselbaink would suffer the ignominy of relegation with Los Rojiblancos in his first and only season, the Dutchman did finish in an impressive second for the Pichichi in Spain, behind Racing Santander’s Salva, with a haul of 24 goals.

Atleti, after two seasons in the second tier, would of course bounce back and become one of the three dominant sides in España. After 13 managers in 11 years, Diego Simeone has been at the helm since the very tail end of 2011.

Since 2012 they’ve consistently finished in a podium spot, winning the title in the 2013/14 season, while introducing some of the most exciting, potent attacking talent to a wider audience; names that roll off the tongue: Fernando Torres, Sergio Agüero, Radamel Falcao, Diego Costa, Antoine Griezmann.

But what else became of that group of players’ forebears, the ones who also donned the red and white and went down to the Segunda at the end of the last millennium? 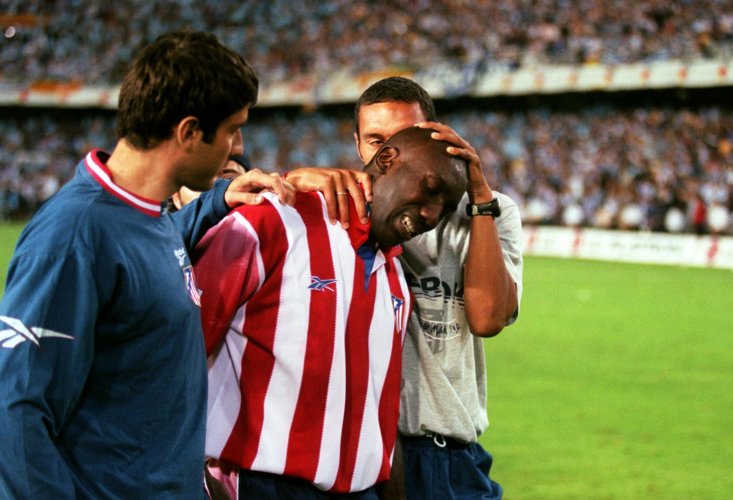 Jimmy Floyd Hasselbaink after being relegated with Atlético Madrid.

Hasselbaink returned to England, to have proficient periods at both Chelsea (reuniting with Ranieri) and Middlesborough, before twilight years at Charlton Athletic and Cardiff City. He retired in 2008, the recipient of two Premier League Golden Boots, and is the 13th highest goalscorer in the competition’s history.

Also included in that team was Santiago Solari, who also left upon relegation and is one of the few players to move directly across the Spanish capital, spending five years at Real. Solari recently managed Los Blancos for the remainder of the 2018/19 season after Julen Lopetegui’s dismissal.

The two Tonis, goalkeeper Jiménez and defender Muñoz Gómez however both remained, the latter ending his career and 11-year association with the club after more than 250 appearances the following season. Jiménez has moved with Mauricio Pochettino as goalkeeping coach since their time at Espanyol, through to Southampton, and onto Tottenham Hotspur.

First-choice goalkeeper Jose Molina hopped over to champions Deportivo. Molina had won the domestic double in his first season with Atleti and made close to 200 appearances. In management one of his more recent teams is the Indian Super League side Atlético de Kolkata, where he came up against another Atleti alumni, Diego Forlan who was plying his trade at Mumbai City FC.

Perhaps the most distinguished name was Joan Capdevila, who also switched to Galicia after a single season at Atlético. The left-back was one of the most fundamental components of the Euro and World Cup winning Spain sides and made a total of 60 appearances for La Roja.

Captain Francisco ‘Kiko’ Navaez had been at the club since 1993, the year after winning Gold at the Summer Olympic Games, and remained until 2001. Óscar Mena also continued his affiliation despite a noticeably shorter spell, coaching the reserve teams up until taking over at CF Gavà in the Tercera División.

An inductee of the FIFA World Cup Team of the Tournament a year earlier, the Paraguayan Carlos Gammara spent his only season in Spain in a relegation dogfight. Another South American, Fernando Correa, took the opportunity in the Segunda División, combining with Uruguyan compatriot Diego Alonso for the haul of 35 goals that would win Atleti the second tier title in 2002. The two continued their relationship by joining forces as coaches of Peñarol in Montevideo.

The legendary Juan Carlos Veron spent two seasons at Atletico from 1998, leading to Hasselbaink rating him as the greatest player he had ever played with, alongside compatriot Dennis Bergkamp and Gianfranco Zola. Valeron was still playing football into his 40s at Las Palmas, the club he began his career at.

Things were worse for the defender and Atletico Madrid academy product Gaspar, who suffered the first of three relegations in the space of five years; he would be part of two sides - Real Oviedo and Albacete Balompié - who would both be condemned to the same fate from the top tier.