Football
News
On this day in 1982, the most nerve-wracking method of settling a stalemate would be used on the biggest stage of all
Matthew Crist
06:55, 08 Jul 2022

Extra time and penalties. Four little words with such huge significance; it’s hard to believe that everyone’s favourite football tiebreaker has only been in existence on the biggest stage for the last four decades.

The World Cup semi-final between West Germany and France on July 8, 1982, in Seville had it all – drama, excitement, goals, a savage foul, not to mention the first-ever penalty shootout held in the World Cup finals.

In the sweltering Estadio Ramón Sánchez Pizjuán, with the temperature still around 90 degrees despite a 9pm kick-off, the two teams played out what is still regarded as one of the greatest World Cup encounters of all time which, after 120 minutes, still couldn’t produce a winner.

The game got off to an equally scorching start as Pierre Littbarski squeezed a shot past French keeper Jean-Luc Ettori and a number of defenders in the 17th minute, though the German joy would last for just 10 minutes before Michel Platini levelled things up from the penalty spot.

The teams remained inseparable well into the second half but with 60 minutes on the clock one of the most controversial moments in World Cup history unfolded as France substitute Patrick Battiston found himself through on goal with only ‘keeper Harold Schumacher to beat.

Throwing himself recklessly in the direction of the onrushing Battiston on the edge of his area, Schumacher crashed into the Frenchman with a sickening crunch as the ball drifted harmlessly wide.

The striker was left in a heap on the floor with two missing teeth, three cracked ribs, and damaged vertebrae and later slipped into a coma with Michel Platini claiming after the game that he thought his colleague was dead – yet no foul was given.

With Battiston off the field and heading for hospital, the French side appeared visibly shaken as both teams probed for a late winner, but neither could make a breakthrough and as the clock ticked past 90 minutes the deadlock had still not been broken.

Moments into extra time France took the lead once more when Marius Trésor scored from a set-piece before Alain Giresse put France 3-1 up to seemingly book their place in the final.

But Karl-Heinz Rummenigge had other ideas, reducing the deficit in the 102nd minute before Klaus Fischer equalized in the 108th to ensure this would be the first-ever game in the history of the World Cup finals to be decided on penalties. 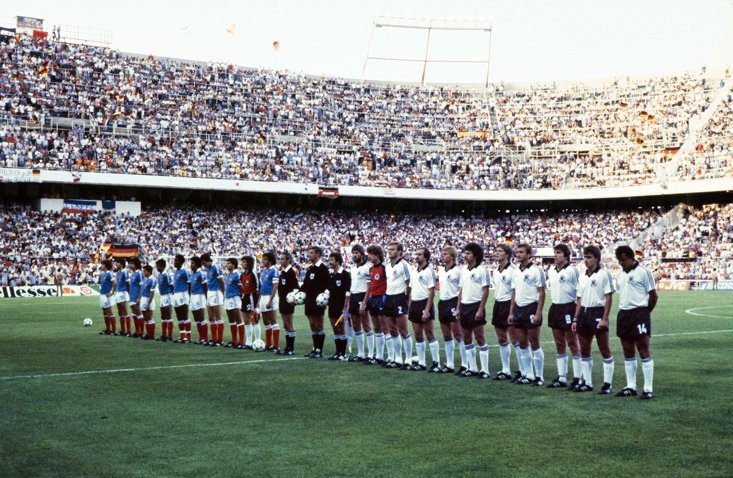 The first-ever penalty shoot-out in England was used to decide the winner of the pre-season Watney Cup competition back in the summer of 1970, while penalties were introduced to settle matches in UEFA's European Cup and Cup Winners' Cup in the 1970/71 season after some games had previously been settled on the toss of a coin.

Penalties had also decided the 1976 European Championship final between Czechoslovakia and West Germany and, the following year, they were used for the first time ever in a World Cup match when Tunisia beat Morocco in the first round of African qualifying.

This, however, was to be the first time since the World Cup finals began in 1930 that this most nerve-wracking method of settling a stalemate would be used on the biggest stage of all and the drama was palpable.

The two were locked at 4-4 following five kicks each after Uli Stielike’s shot was saved by Ettori and Schumacher, who many believed should have been sent off for his challenge on Battisto, denied Didier Six - with sudden death now needed to decide who would go through to play Italy in the final.

Maxime Bossis stepped-up for France, but Schumacher – who in a post-tournament poll would be voted the most hated person in France, just ahead of Adolf Hitler - once again proved to be the hero before substitute Horst Hrubesch scored the decisive penalty to book his country’s place in the World Cup final for a fourth time.

In the years since, penalty shootouts have become synonymous with World Cup drama, with all the nail-biting tension they provide – some nations faring better than others.

But after 90 minutes of regulation play, then 30 minutes of extra-time, there appears no other way to separate two teams and despite FIFA introducing the golden goal, and even the silver goal, both proved unsatisfactory and typically had teams too terrified to go forward.

So love them or loathe them it appears they are here to stay.

5 of the most memorable World Cup shootouts ever

The cruellest way to lose or the greatest way to win; those who have failed have to live with the consequences for the rest of their lives while the victors are immortalised as heroes.

So to celebrate the spot-kick, here’s a selection of the most memorable World Cup penalty shootouts of all time… 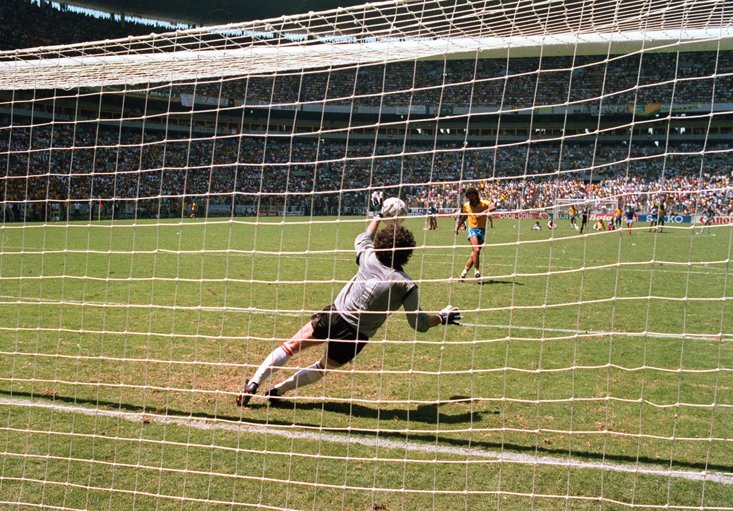 European champions France defeated many people’s favourites, Brazil, 4-3 on penalties after a thrilling quarter-final ended 1-1 in Mexico and despite Michel Platini missing one of the kicks on his 33rd birthday, Les Bleus advanced to the semi-finals where they would once again lose out to the Germans.

Germany were no strangers to penalty shootouts, but for England, this was their first taste of the dreaded tie-breaker and after being successful with their first three kicks, eventually crashed out of the World Cup when Stuart Pearce and Chris Waddle missed from the spot – bringing the curtain down on one of the most memorable campaigns in Three Lions history.

After a dreadful game ended in a draw 0-0 after extra time, Brazil won their fourth World Cup title by defeating Italy 3-2 in a penalty shootout with Roberto Baggio blasting his decisive kick over the bar in the first-ever World Cup final to be decided on penalties.

In a game probably best remembered for David Beckham being sent off for kicking-out at Diego Simeone, ten-man England could not hold on to Michael Owen's lead and were again faced with the dreaded penalties as Paul Ince and David Batty joined the growing group of unfortunate penalty takers with England crashing out once again.

Following a 1-1 draw and a Zinedine Zidane head-butt, a penalty shootout was required to separate these two international heavyweights and, though neither goalkeeper made a save, David Trezeguet’s penalty hit the crossbar, which proved to be costly for France as the Italians won on spot-kicks to claim their fourth World Cup.