It was a familiar sight. Moments after Peter Olayinka had silenced the San Siro with a goal that gave Slavia Prague the lead against Inter on the opening night of the Champions League, the camera cut to Antonio Conte. Conte looked pensive; no doubt a million thoughts were percolating as to how to get his team out of this hole. Those eyes - menacing even at the most congenial of times - conveyed the anguish of a man who’s been in this situation before.

Inter would eventually salvage a barely credited draw against the Czech champions, through a fortuitous goal from Nicolo Barella with minutes remaining. Yet, the draw couldn’t mask how much better the visitors were in every aspect of the pitch, they outplayed, outfought and displayed an intensity that’s usually the hallmark of a Conte side. It was the latest in a string of disappointing European performances from a Conte side.

Conte has a peculiar relationship with Europe’s elite competition. Despite winning the competition as a player with Juventus in 1996 and playing in four finals, as a coach he’s been unable to transfer his league success to the Champions League. Never going beyond his sole quarter-final appearance with Juventus, Conte’s failures in Europe are a blotch on his otherwise exemplary managerial CV.

To date, his best season in the competition was his first, reaching the quarter-final with Juventus in 2012/13, where they were systematically taken apart by Jupp Heynckes’ Bayern Munich in both legs. It was in this debut season that also saw him mastermind his greatest victory in the competition, dismantling then European champions Chelsea 3-0 in Turin. The defeats to Bayern were simply chalked down to being swept aside by a classier and more experienced side.

It wasn’t until the following season that doubts started to emerge surrounding Conte’s European credentials. Drawn in a group containing Real Madrid, Galatasaray and Copenhagen. Juventus didn’t pick up a win until matchday 5, in a laboured 3-1 home win over Copenhagen.

A group that should’ve been relatively straight forward had somehow boiled down to the last game, the-now infamous decider with the Turkish giants in a mud bath at the Telekom Stadium in mid-December. Wesley Sneijder’s winner five minutes from time sent them into the round of 16, and Conte into the Europa League. 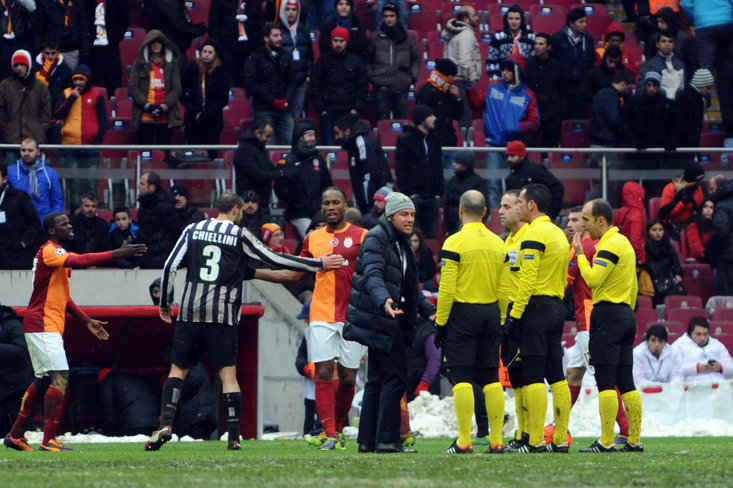 The infamous decider with Galatasaray that ended in misery for Conte

The recriminations started almost immediately, what went wrong? Conte’s reluctance to deviate from his favoured 3-5-2 formation against lesser opposition was cited by many as the primary cause.

For their encounters against Real, Conte had switched to a 4-3-3 and, unsurprisingly, Juve produced their best football of the season. Real, never a team to implement a reactive strategy, left gaps defensively that undoubtedly played into Conte’s hands, and yet despite only picking up a point from both games, it gave him another tactical alternative.

But the alternative was put in a drawer and never used again. He reverted to type for the remainder of the season. Conte’s 3-5-2 was rigid and lacked fluidity, with wing-backs Stephan Lichtsteiner and Kwadawo Asamoah performing the same rehearsed instructions time and again; Andrea Pirlo, Arturo Vidal and Paul Pogba tried to operate in overcrowded midfield areas as lesser-quality teams became difficult to break down.

Nevermore was this crystallized than in the semi-final of that season’s Europa League. Having lost the first leg 2-1 against Benfica at the Stadium of Light, the return required Juventus to score a single goal to make the final – to be played at the Juventus Stadium.

They laid siege to Benfica’s goal for 90 minutes and failed to create anything meaningful, snatching at half chances as Benfica held on. The lack of invention, of spontaneity, in his system was never more evident. The league meanwhile was a procession, making history by winning the league in triple digits.

Conte, whilst able to get his teams to grind out results in a league season, has been accused of lacking the ingenuity to change the outcome of a game mid-course, an ingredient so integral in cup competitions. Certainly that was the case during his time with Juventus, where he would make substitutions too late in games for them to have any real effect. What exacerbated Conte’s European-allergic reputation was his successor Max Allegri taking what was ostensibly the same side to within 90 minutes of a treble the following season.

In the aftermath of the dismal showing against Slavia Prague, he snapped at Italian journalists who probed about changing formations, saying:

Only in Italy are we fixated on formations. I’ve coached in England and they don’t give a damn over there.

Conte’s record of nine wins from 24 games in the Champions League is hardly statistics fitting for a man of his pedigree, and with two of Inter’s next three games away to Barcelona and Borussia Dortmund, it’s difficult to believe he will enter double figures in the winning column over the next month.

Defeat on Wednesday could leave Inter staring down the barrel of Thursday night football, and even more questions concerning the Conte European conundrum.